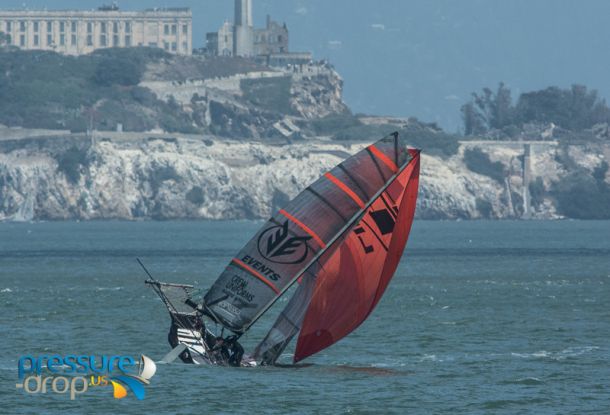 Over she goes! A difficult day of racing on the second day of the San Francisco 18ft Skiffs. Photo Erik Simonsen/Pressure Drop.

“It was no doubt, the most challenging, difficult skiff sailing I have ever encountered,” lamented veteran local skiff sailor Daniel Roberts, skipper of Notorious P.I.G., a well loved, vintage 18' that actually was able to complete all three races during Tuesdays racing on San Francisco Bay.

An unusual southerly windflow over Northern California had ushered in September, with brisk, yet warm airflow in the mid to high 20's in the early hours. The direction meant the wind would be forced over the steep hills of San Francisco, then plummet down like runaway freight trains, intermixing with the more traditional south westerlys creating 30 to 40 degree shifts, which tested crews and rigs like no day has before during a summer 18 event on San Francisco Bay.

The predetermined course, has a bit of wiggle room, but in general is designed to take advantage of the 99% reliable breezes that filter in from off the Ocean and into San Francisco bay before fanning out towards the Sacramento delta and points beyond. Tuesday's conditions lay testament that Mother Nature plays by her own rulebook and humans just need to adjust.

The sudden microbursts were in full effect by the noon first gun, as the fleet dispersed on port tack and were launched into mid bay with winds in the high teens, gusting and shifting at will. “If you fell on the wrong side of one of the microburst, you might take a 30 degree knock followed by little to no wind in your sails. Hit the impulse just right, you get a great lift and accelerate right at the weather mark,” Daniel explained.

These sudden bursts of energy not only took a toll on the position of boats as they worked their way around the track, hammering the unfortunate and hurtling others past competitors in a sling shot pattern, but also managed to expel an extraordinary amount of damage in a short amount of time.

Before the two laps of race 2 were even completed, four boats had retired to the beach, unable to compete any further during the day. Will Tillers AON, Keagan York's Compass Markets and Tim Parson's Stoke Beer all took enough damage to knock them out for the afternoon. Also taking a major blow was Howie Hamlin's Harken that suffered a jib lead failure while in mid bay. The resulting bang was so loud and violent the crew instinctively capsized the boat, preventing a catastrophic rig failure. The crew of Daniel Philips and Skip McCormack spent the better part of 30 minutes removing the mainsail from the mast while the rig was submerged, before limping the boat back to shore on a jury rigged jib alone.

With four boats on the beach, the fleet was reduced to seven for the rest of the day, an opportunity for the older boats to do some catching up or pass their less fortunate counterparts, and several of the top boats to put some distance between themselves and the rest of the pack. Riding a three bullet afternoon,

David McDiarmid's Yamaha utilized three outstanding starts to get to clear air and accelerate ahead of Alex Valling's C-Tech, who was nipping on their heels throughout the day and collecting a trio of deuces for the four man team. Was the unusual four man crew a help or hindrance? “Definitely a plus going upwind,” Alex commented , “Downwind it probably wasn't as effective and ended up with a crew in the boat and not on the wire as much as we would have liked.”

Graham Catley and crew on Maersk Line had a 4-3-3 afternoon, and one of the most amazing unintentional jibe sets ever witnessed. After rounding the weather mark in race 3 , they were set for a bear away and were met with unrelenting header and then lull, the boat spun to port and the crew ejected,. with the boat on edge of capsize the managed to get back on board and pull the kite around, a puff quickly grabbed the kite and off they went, rocketing to clear air and ahead of the nearest competitor!

Chad Frietas has been the leader of the RYC's Skiff Sailing Foundation and has arguably logged on the most time on 18s of any San Francisco Bay. Nursing the old and tired 18's is what the Skiff Sailing Foundation does, spending countless hours putting humpty dumpty's back together again for another stab at this annual right of passage for extreme apparent air junkies to engage on. With Hamlin sidelined, Chad and company stepped up to the plate and reeled off a steady 3-4-4 on White Lightning, and are currently within striking distance of a podium position, just three points off the pace with six races under their belt, and four more scheduled before the fat lady sings!

By far and away, the most wickedly amazing interactions of the day occurred during race one, when two of the Skiff Sailing Boat met just east of the windward mark. Daniel Roberts and crew on Notorious P.I.G. had been having a hell of a time getting the beast that swims back on her feet while JV Gilmour and crew on PINK were bearing away and getting set to launch the kite when they took an unexpected knock and sailed right into the path of P.I.G. whose sprit interlocked with their racks sending the crew of PINK into the drink.

It was a day of attrition and determination. And even though they are much heavier than their more modern counterparts, and lack the modern sails and rigs, the never say quit attitude of the Skiff Sailing crew managed to keep it together and put some numbers on the board. As James Clappier, Bowman on the P.I.G. stated, “With all the boats blowing up around us, were more determined than ever to finish the races.”

Wednesday is a lay day and action resumes on Thursday with the legendary Bridge to Bridge in the late afternoon and three additional races on Friday.

For more shots of the carnage, go to the Australian Sailing Facebook page.

Watch the video by Christophe Favreau: