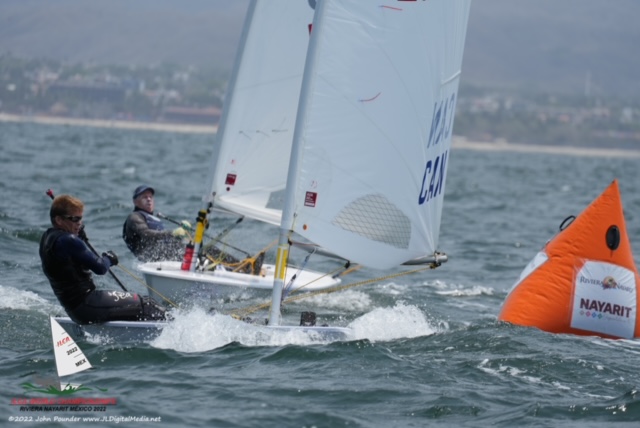 The sailors took to Banderas Bay in about 16 knots of wind for the first warning signal at 12:30. In 10–12 knots of shifty wind, there were some UFDs, some capsizes, but overall, a nice day of racing.

In the Apprentice fleet, Charles Baillie Strong of Luxembourg leads the way ahead of Argentina’s Andres Heredia and Adil Khalid of United Arab Emirates. In the Master’s fleet, Greek Adonis Bougiouris secured two first-place finishes to sit ahead of Americans Peter Hurley and Ernesto Rodriguez who are tied with both a second- and third-place finish each.

In the Grand Masters fleet, Great Britain’s Mark Lyttle finished with a second and first place to sit in first overall. Australians Brett Beyer and Steve Gunther are close behind in second and third, respectively.

Once ashore, the sailors could enjoy the on-site buffet and post-racing beers provided by the event hosts, Paradise Village and Vallarta Yacht Club. Two races are scheduled for tomorrow with the skippers meeting at 10:00 and the first warning signal at 12:30.

For the full results, see: sailwave.com/results/vyc/ILCA7Masters2022.htm