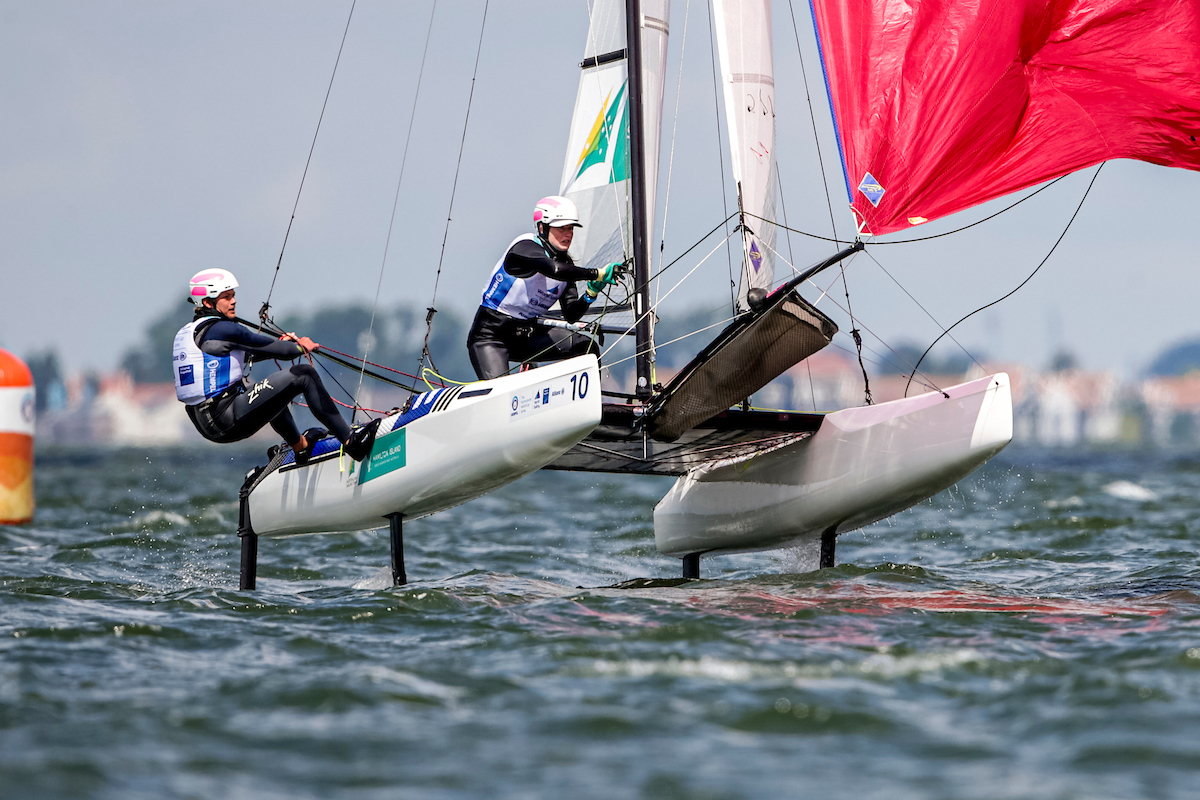 The racing in Almere at the Hempel World Cup Allianz Regatta has been described as diabolical as big wind shifts and pressure changes meant sailors needed to have their head on a swivel to spot the next opportunity on the racecourse.

The erratic eight to 15-knot winds and 40-degree wind shifts were attributed to the westerly breeze having to navigate the city of Amsterdam on its way to the five racecourses.

2012 Olympic silver medallist, Olivia Price, came out firing in today’s racing. Price put together a consistent day placing her and crew Evie Haseldine first in the overall rankings. Price returns to the FX this year after a six-year hiatus from Olympic sailing.

“It’s been a great experience getting back into FX sailing after almost six years off,” Price shared. “It’s obviously a steep learning curve in the competitive fleet but I’m loving being part of the Aussie squad and working hard together.”

Despite sitting in first place it was a challenging day for the 29-year-old, “Today was a tricky day all round,” Price admitted.

“Big shifts and pressure changes across the course made for eyes out sailing. We had a strong focus on our start positioning today, which we were able to execute more than we could in previous regattas, and there were opportunities out on the race track too.”

The racing was just as tough on the ILCA 6 course with Australian ILCA 6 coach Carolijn Brouwer commenting that wind direction and course location meant that it was challenging for both sailors and the Race Committee.

“It was a very tough day as the ILCA 6 fleet was out on the water for over six hours and only sailed two races, so it was all about keeping warm and staying focused during the long waiting.

“Mara had the best day with a 13th and sixth. She has been quite conservative so far but went for a bolder strategy in the second race which paid off.”

Consistency in the 49er fleet has put Australian Sailing Squad members Jack Ferguson and Max Paul in fourth overall after five top-six finishes. The remainder of the Australian 49er squad had promising results placing them all in the gold fleet for the Final series.

The 49er class will split into gold and silver fleet for tomorrow’s racing with the top twenty set to battle it out in the gold fleet over the following two days. All other classes are racing a one fleet series before the top ten are decided for the Medal Race on the weekend.

Two-time 470 Olympic Gold Medallist, Malcolm Page, is guiding the new Australian mixed 470 teams as they embark on new combinations for the 2024 Games. Page is relishing in the role and sees the smaller fleet at this week’s competition as a chance for the teams to earn their stripes.

“It an opportunity to help them grow up, to become leaders and to learn to play at the front of the fleet,” Page said.

Conditions were just as erratic on the 470 course, however Page has described it as a lot of fun rather than just a tough day.

“It was really shifty, it was really cool,” remarked Page. “You had to go in with a never say die attitude, no matter what happens when you get the bad end of the stick you could end up with the good side of the stick on the same leg.

“I have to admit I was a bit envious today, I would have loved to have had a crack at that racing.”

NSWIS athletes Jake Liddell and Lucy Copeland find themselves in sixth overall after four races in the Nacra 17. Liddell commented, “It was nice to get some good breeze today. Our course got moved around the corner to where there is less seaweed, which made for really nice conditions.”

Racing resumes tomorrow at 11:00 local time with the Race Committee reverting to the regular schedule with two races planned for ILCA 6 and Mixed 470 and three races on the cards for 49er, 49er FX, and Nacra 17.