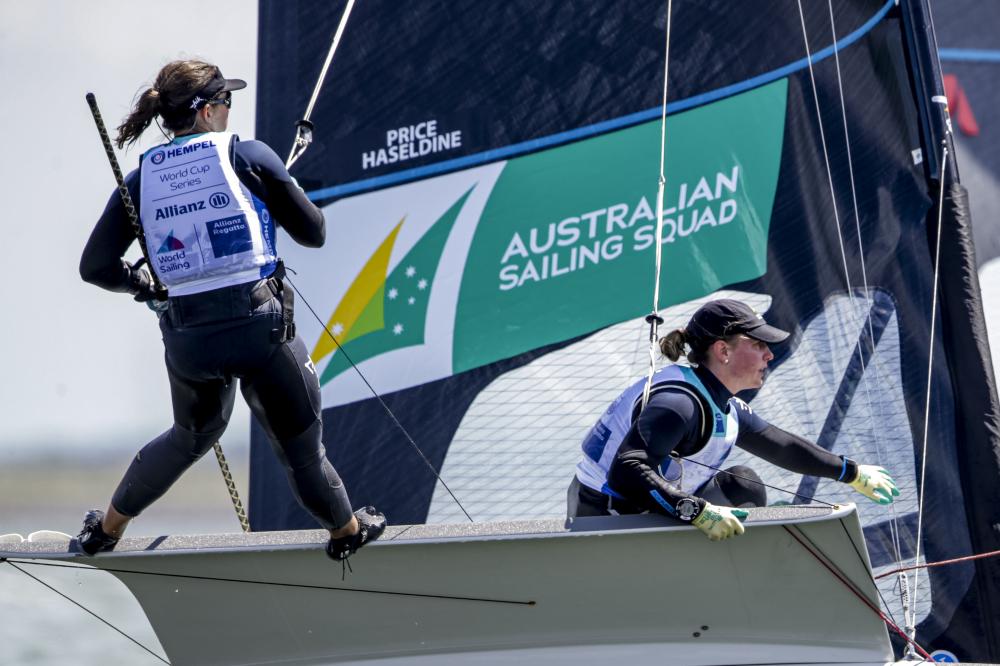 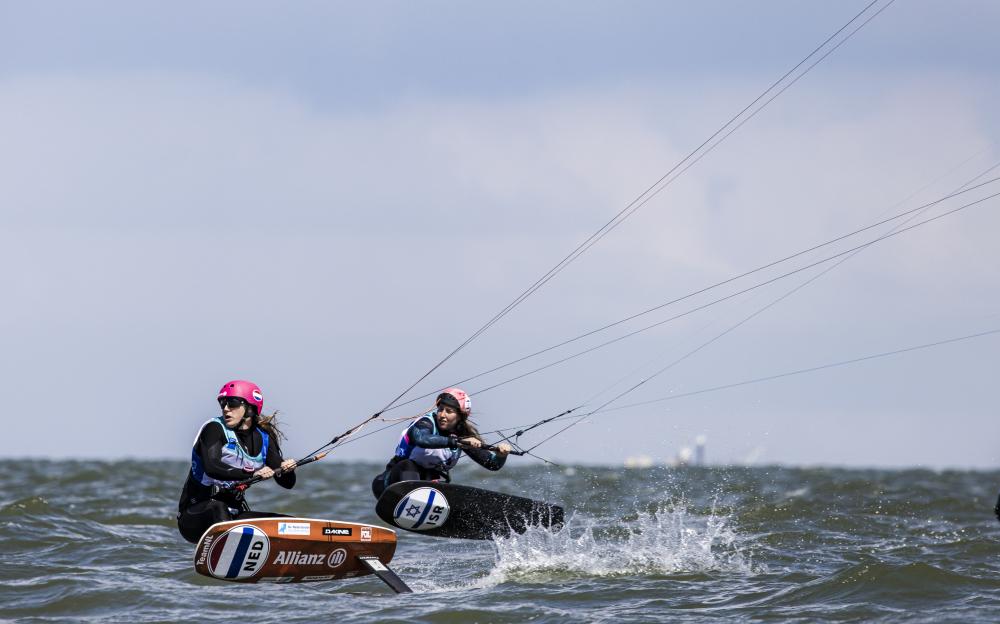 Almere, The Netherlands: Odile van Aanholt and Annette Duetz (NED) started the Hempel World Cup Series at the Allianz Regatta as they were expected to in the 49erFX, winning three of the four races in the 23-boat fleet.

However, they were later judged to have not sailed the proper course in the opening race, giving the Dutch team an NSC score, effectively a disqualification.

The course error dropped the Dutch to second overall, moving the top Australian crew of Olivia Price and Evie Haseldine into the top spot. It was a good day all round for the Australian squad, with Aussie crews holding first, third and fourth overall.

Having just formally announced their partnership through to the Paris 2024 Games, van Aanholt and Duetz were pleased to have begun the campaign on such a strong note whilst identifying plenty of room for improvement. “We’re pleased we managed to keep it clean today,” said van Aanholt, before becoming aware of the NSC penalty that hit them later in the day. “There’s lots of things we could be doing better, we felt a bit all over the place and there was a bit of confusion.”

Considering the wind was gusting from between 8 to 16 knots and shifting up to 40 degrees, it’s understandable that the reigning World Champion (van Aanholt) and the Tokyo 2020 Olympic bronze medallist (Duetz) were struggling with their teamwork. “There was lots happening all the time and the chop really built up when the breeze was up,” said Duetz, herself a double World Champion. “It definitely kept us on our toes.”

Aussies on the escalator

It’s almost exactly 10 years ago since a 19-year-old Olivia Price won Olympic silver as skipper of Australia’s women’s match racing crew at London 2012. The youngest ever female medallist in sailing, she narrowly missed out on gold to the Spanish team skippered by Tamara Echegoyen who since went on to win two 49erFX World Championships. After six years away from FX campaigning, Price is back in the boat with 19-year-old Haseldine who is on her first European tour of the Olympic circuit.

“It’s been a long time away from competition,” said Price, “But today was really good and makes all the effort back home worthwhile. We’ve got a good squad back home in Australia, getting seven or eight boats on the start line and all working together. The training has helped us kind of replicate some of the tighter situations that you get when you come back to Europe.

“This week our focus is on better starts and we did plenty of those today, a couple of general recalls and the races themselves. Racing in a 30-boat fleet, it was intense, and it doesn’t get much better than that.”

470 racers Elena Berta and Jacopo Izzo (ITA) were among the winners from an intense second day of the Hempel World Cup Series at the Allianz Regatta.

The Italian crew scored 1,9,1 to come out ahead in the Mixed 470 fleet racing in Almere, not far from the Dutch capital Amsterdam.

“It was very shifty and gusty,” said Berta, “and the key was always to try to read the wind on the water.” The two race wins came from starting strongly and defending position against the fleet while trying to keep an eye on the ever-changing breeze.

Berta and Izzo, along with the rest of the Italian squad, are coached by Gabrio Zandona who won the 470 Worlds back in 2003. The Australian squad are coached by one of Zandona’s former rivals, the multiple 470 World Champion and double Olympic gold medallist Malcolm Page.

“Gabrio and I were watching that racing today and wishing we were out there,” said Page. “It was just perfect, full-on conditions – 40 degree shifts, big pressure changes, always having to be on the lookout for the next threat or opportunity, maybe pushing your opponent into a clump of weed as you tack away,” he smiled cheekily.

The weed has been a talking point among the five fleets based in Almere, but today the racing took place further away from Amsterdam in the deeper part of Markermeer further to the north, and that seems to have solved the worst of the weed problem.

While it was a good start to the competition for the leading Italians, the 470 looks like it will be tight fight all the way to the weekend. The other race win went to Keiju Okada and Miho Yoshioka of Japan, who sit in fourth place overall behind two teams from Swizerland and India in second and third, respectively Linda Fahrni/ Cyril Schüpbach and Uma Chouhan/ Ravindra Sharma.

On the first day out for the foiling classes in Lelystad, it was a stellar outing for Annelous Lammerts (NED) won all four races in In Formula Kite Women, with Israel’s Maya Ashkenazi and Gal Zukerman in second and third.

In the Formula Kite Men,  Benoit Gomez (FRA) won all four heats of Blue Group. In Yellow Group it was two wins each to Dor Zarka (ISR) and Riccardo Pianosi (ITA), with Israel holding second overall ahead of the 16-year-old Italian.

iQFOiL Men – Max Castelein (NED) came out ahead of the first four races against Louis Giard (FRA), the Dutchman winning three heats and the Frenchman the other.

The forecast is looking light for Thursday, but the plan is for more qualifying races in all nine Olympic fleets.

By Andy Rice for World Sailing