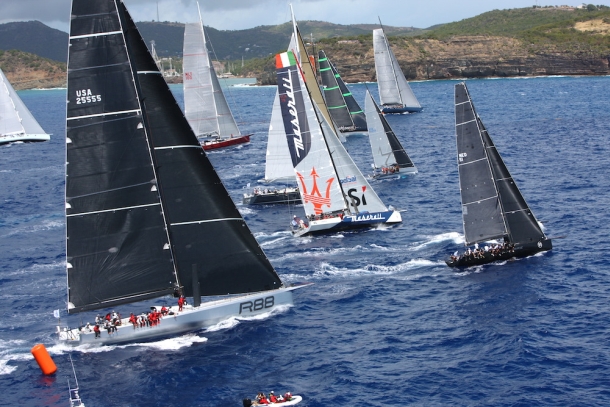 66 yachts started the 7th edition of the RORC Caribbean 600, with hundreds of race fans watching the impressive fleet from Fort Charlotte and Shirley Heights. Thousands more are now glued to the tracker and social media feeds. After a classic start in 15 knots of easterly trade winds, the fleet powered past the Pillars of Hercules, heading for Green Island where they will bear away and accelerate towards Barbuda, the only mark of the 600-mile course around 11 stunning Caribbean islands.

Lloyd Thornburg's MOD 70 Phaedo3, with Michel Desjoyeaux and Brian Thompson on board, had a conservative start with Petro Jonker's cruising catamaran, Quality Time crossing the line first. Phaedo3 lit the blue touch paper at Green Island, blasting through the surf at well over 30 knots. The lime-green machine reached Barbuda in less than two hours, well ahead of record pace and eight miles ahead of Peter Aschenbrenner's Irens 63, Paradox.

In the second start, 19 yachts in IRC Two and Three started the 600-mile race. For most of the crews racing in the smaller yachts it will be three or four days before they complete the challenge. Ed Fishwick's Sunfast 3600, Redshift, skippered by Nick Cherry, got a great start at the pin-end with Ross Applebey's Oyster 48, Scarlet Oyster, judging the inner distance mark to perfection. Andy Middleton's First 47.7, EH01 and Scarlet Oyster were the first yachts in IRC Two to reach Green Island and it is likely that these two will be neck-and-neck for the duration of the race. In IRC Three, Peter Scholfield's HOD 35, Zarafa was leading on the water at Green Island. However the Two Handed team racing Louis-Marie Dussere's JPK 10.10, Raging Bee was the leader in class after time correction.

Jonathan Bamberger's Canadian J/145, Spitfire and Joseph Robillard's S&S 68, Black Watch got the best start in the 15 strong fleet racing in IRC One. However, Jose Diego-Arozamena's Farr 72, Maximizer,revelled in the upwind start to lead on the water at Green Island. Oyster 625, Lady Mariposa, sailed by Daniel Hardy had a great leg to Green Island as did James Blakemore's Swan 53, Music which was leading after time correction.

The penultimate start featured 21 yachts racing in IRC Zero and Canting Keel, arguably the best fleet of offshore sailing yachts that has ever been seen in the Caribbean. A highly competitive start saw Piet Vroon's Ker 51, Tonnerre 4, win the pin, while Ron O'Hanley's Cookson 50, Privateer took the island shore route to perfection. Farr 100, Leopard sailed by Christopher Bake, also had a great start, controlling the boats to leeward heading for the Pillars of Hercules.

Hap Fauth's Maxi 72, Bella Mente had a sensational first leg of the race, rounding Green Island first out of the IRC Zero class, but all eyes were on George David's Rambler 88, as the powerful sled turned on the after burners. George David's new speed-machine could well break his own monohull course record; at Barbuda Rambler 88 was almost five miles ahead of the ghost track of the record set by Rambler 100.

Two of the world's most magnificent schooners were the last class to start. Athos and Adela started their match race in the pre-start and there is no doubt that the battle of the titans will continue throughout the race. Athos won the pre-start in some style, chasing Adela downwind and away from the line, before rounding up onto the breeze and crossing the line over a boat length ahead of her rival. However, Adela was far better suited to the beat up to Green Island and led as the two schooners continued their rivalry towards Barbuda.