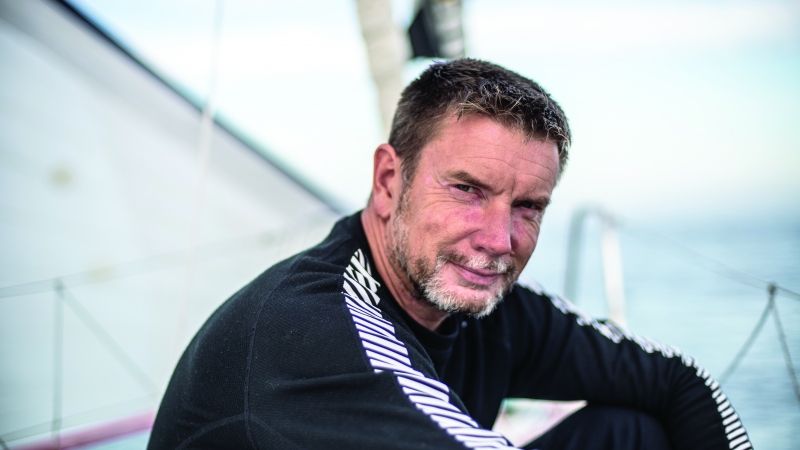 The Route du Rhum-Destination Guadeloupe has historically been a predominantly French affair – even if the first race was won by a Canadian in Mike Birch – but the 40th anniversary staging of the event features the strongest contingent of international sailors in the race’s history.

Among the 123 skippers taking the start at St Malo for the 11th edition of the race starting next Sunday, will be 23 non-French sailors making up some 20 percent of the fleet with entrants from the USA, Australia, Belgium, Britain, Finland, Germany, Italy, Sweden, Switzerland and Japan.

The strongest contingent is from Britain with five skippers in the Class40 fleet and two in the IMOCA division. In the IMOCAs the British challenge is led by Alex Thomson, the runner-up in the last Vendée Globe, who will be racing in the Route du Rhum-Destination Guadeloupe for the first time. The stampede to Pointe-à-Pitre will be his final outing for his current Hugo Boss before his new boat hits the water next year.

Also taking the fast route to Guadeloupe on a foiling flyer will be Thomson’s fellow countrywoman, Sam Davies, at the helm of Initiatives Coeur. Now 44-years-old and a veteran of the 2008 Vendée Globe, when she finished fourth, and the 2015 Volvo Ocean Race, Davies wants to do well in what will also be her first Route du Rhum-Destination Guadeloupe.

Based in Lorient, the British skipper has taken time to get used to her boat formerly sailed by Jérémie Beyou – a VPLP-Verdier design equipped with the latest generation of foils. “You have to learn how to deal with the stress and violence of the boat,” she said. Among Davies’ rivals will be her husband – the French sailor Romain Attanasio who will be at the helm of the IMOCA, Pure-Famille Mary.

The British contingent in Class40s is powerful with four skippers in the class led by the experienced Phil Sharp and Sam Goodchild who should be in contention to win this huge division of 53 boats. Sharp at the helm of Imerys Clean Energy brings an impressive record to the start line, having won this race in Class40s in 2006 and finished third in the class in both The Transat Bakerly in 2016 and the Transat Jacques Vabre in 2017.

But Sharp is under no illusions about how tough this contest is going to be. “The level has greatly evolved,” said the Briton who is now based in La Rochelle. “The standard of competition promises to be very high and there are more than 50 boats so you might even say it is shaping up to be an extraordinary challenge.” Sharp has proven he is a determined competitor who will keep hard driving against all odds.

Goodchild too is an impressive sailor with an enviable record and a decent boat, a Mach40 named Narcos : Mexico with backing from Netflix.

“Single-handed sailing is what really gets me fired up, but I’ve tried as many other things as possible to rack up the maximum variety of experience,” said Goodchild, who is from Falmouth but spends much of his time in Lorient. He will be going for the podium. “There are no excuses – my goal is to reach Guadeloupe with no regrets.”

Britain’s Jack Trigger at 24 years old represents the best young, non-French hope in Class 40 and starts his first solo transatlantic race in a radical Jason Ker design which has yet to fulfill its potential. He is part of the British Team Concise program which owner Tony Lawson has backed for more than 10 years with a goal of helping to nurture young British ocean racing talent.

Trigger says: “I want to finish, obviously, as it’s my first solo transatlantic race. But I want to be competitive. The aim of the campaign is to be competitive. I am on a much smaller budget than many of the teams. But I have the boat and we have made some smart decisions on where we have spent our money, time and resource.”

There are three American skippers in the race, all in the Class40 fleet. John Niewenhous in Loose Fish is a professional pilot who at 60 is relatively new to solo ocean racing. His goal is to get to Point-à-Pitre in one piece and inside the top-23% of the fleet. His fellow Americans in the class are Michael Hennesy on Dragon, an Owen Clarke design launched in 2008 and Donald Alexander a 60 year old property investor who races The Power of One.

Hennesy is the Class40 representative in the States and holds down an important role in banking when not on the water. “My goals?” he asked. “The first is to make it to the start line and the second is to make it to the finish line. Between the two, I hope to sail an honourable race.”

There is only one Swede in this nautical contest and it is Mikael Ryking on Talanta. The 47-year-old from Stockholm has been sailing all his life having started in Optimists at six. But after a successful career in the telecommunications industry he was looking for a new challenge and found it in the Route du Rhum-Destination Guadeloupe.

“I was one of the best in my field but I’d got to the point where I didn’t really feel like it was challenging me anymore,” he said.

“I lacked inspiration and energy so I decided to turn my life around and participate in the most spectacular races on the planet.” Self-funded, Ryking will be looking to make a respectable passage to the Caribbean. “It’s not easy, but I’m heading in the right direction,” he said.

Finnish skipper Ari Huusela competed in the 2014 Route du Rhum Destination Guadeloupe on a Class40 yacht but, in line with his ambition to compete in the next Vendée Globe in two years’ time, he now races in the IMOCA class. A full time FinnAir Airbus 350 pilot, Huusela has moved up the classic ocean racing pathway from Mini Class to Class40 and to IMOCA.

Also with one entrant is Japan, but Hiroshi Kitada has the benefit of considerable experience in this field. He is a veteran of the Rolex Fastnet Race in 2017, the Transat Quebec-St Malo in 2016 and The Transat Bakerly in 2016 when he finished seventh in Class40s.

Based in Lorient but hailing from Aomori in Japan, the 54-year-old company director first discovered sailing when he was looking for a little wooden boat to put in his swimming pool. After sailing single-handed in a Mini6.50 and then a Pogo S3, he stepped up to Class40.

“Initially I introduced myself as a 51-year-old beginner,” he said. “Today I am three years older,” continued Kitada who explained that he first got to grips with solo offshore sailing in The Transat Bakerly, a race which – like the Route du Rhum-Destination Guadeloupe – is owned and organised by OC Sport.

“That’s where I learnt what offshore racing really meant,” he said. “I really love the simplicity of single-handed sailing. It’s impossible to blame someone else if you make a mistake.” His boat, Kiho, is named by combining the initials of his wife and daughter and signifies “precious sails” in Japanese.

There is a strong German contingent with two skippers in the IMOCA fleet, among them the Franco-German sailor Isabelle Joschke on Monin. Aged 41 and also based in Lorient, Joschke has previously impressed in Class40s. Having bought Yann Elies’s VPLP-Verdier designed 60-footer, she has prepared well for her first Route du Rhum-Destination Guadeloupe.

“I’ve done a lot of sailing with the aim of making the boat as accessible as possible in solo configuration,” she explained. “What matters most is that the boat sees it through on a technical level. I’ll have a bit of pressure on my shoulders as the first section may be tough, but I’m not going to pressure myself about a result as I know I’ll be flat out,” added Joschke.

Hamburg’s 37 year old Boris Herrmann has already finished two round the world races, winning the Global Ocean Race in Class40s and finishing fifth in the Barcelona World Race. This will be his first big solo race in the IMOCA fleet with Malizia which is a modern VPLP-Verdier design which raced the last Vendée Globe as Gitana. Herrmann has backing from the Monaco Yacht Club which will take him through the next Vendée Globe.

Herrmann said: “I don’t really know what to expect. I have a great boat, one of the best boats. I have been happy with the speed of the boat when I have been training in Port La Foret. I hope to be able to stay in the leading pack.

“I am not under the same pressure as some of the others here because my sponsorship commitment with the Yacht Club de Monaco is through to the Vendée and the expectation of the people who support me is to bring the boat across in a safe way and to learn for the Vendée Globe.”

So there are some foreign raiders to watch out for in this Route du Rhum-Destination Guadeloupe and, who knows, a non-French sailor could take the spoils in the Class40 or IMOCA fleet.