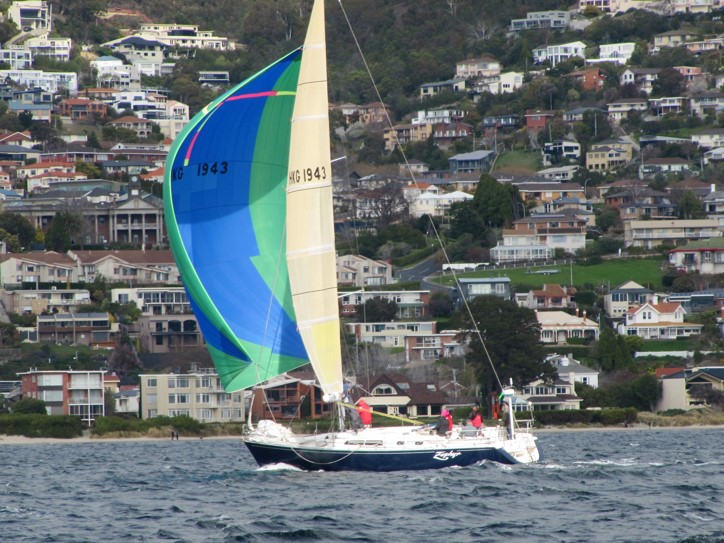 Winter yacht racing on Hobart’s River Derwent came to a lively end on Sunday, with the Derwent Sailing Squadron/Cascade Winter Series fifth and final race being sailed in a strong 25 knot+ nor’wester that created some havoc among the fleet.

The sports boat Temptation (Steve Harrison) had a man overboard situation and several other keelboats and SB20s suffering sail and rigging damage in out-of-control rolls during some spectacular downwind sailing.

Temptation’s MOB reportedly happened as the Division 1 fleet ran down to the Nutgrove Beach mark, with the remaining crew unable to drop their spinnaker and return for a pick-up.

Fortunately, nearby club rescue boat quickly retrieved the sailor and returned him to the DSS, apparently without suffering any harm.

Despite its retirement from the final race, Temptation still finished third overall in Division 1, with winter pennant going to Ian Johnston’s Zephyr on a net 8 points, with the Jock Young-helmed 8-metre Juana second on 11 points and Temptation on 15 points.

In Division 2, a second place to Another Toy (Latham Syndicate) yesterday was sufficient to give the J24 the pennant, scoring a net 5 points to Vasco (Graeme Harrington’s Vasco’s 9 points. Third overall was Wildfire (Jon Ettershank) on 11 points.

Kerry Boden’s Nirvana won the final race for Division 3, its best result of the Winter Series, from Dynamo (Stephen Davidson) and Serenity (Graham Hall). That third place gave Serenity the Winter pointscore by one point from Dynamo. Third overall was Kharis (Terry Dalby).

In the SB20 Winter Series, Andrew Blakney’s Wicked had a big win in the one-design pointscore, clinching victory with a third in race 9 and then retiring from race 10.

Difficult Women, with champion Moth sailor on the helm, crashed out of contention with a DNF in race nine, apparently due to mast damage, and a DNC in race 10.

Under PHS handicapping, the overall winner of the SB20 fleet was Foreign Object, by half a point from Big Ted (Tom Steanes) and another half point to Wicked.