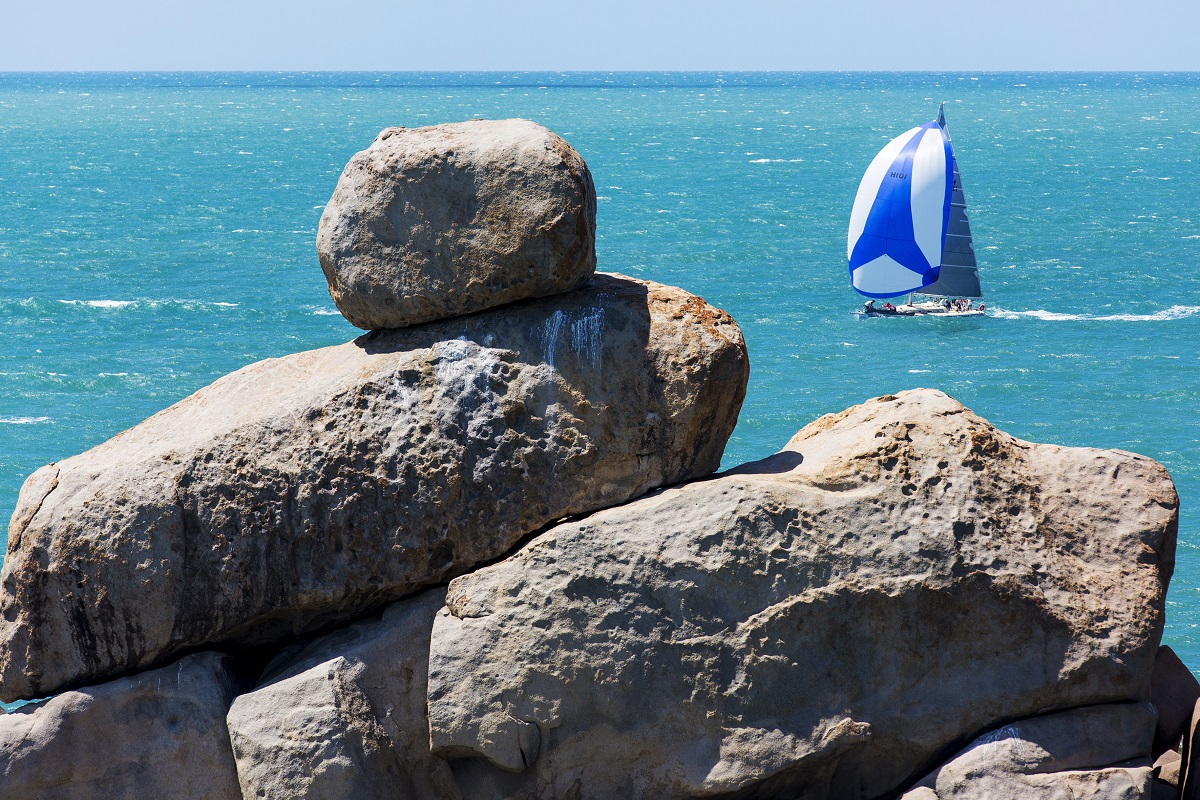 The 71 crews taking part in Sealink Magnetic Island Race Week had their best day yet, a race around Magnetic Island in winds of up to 20 knots – it just does not get any better, according to competitors when they returned to Peppers Resort to berth this afternoon.

Townsville Yacht Club’s 10th anniversary regatta is just getting better and better. Lumpy seas and a 12 knot breeze sent the fleet on its way, but before you could blink, they were back.

Before the race got underway, a crew member on Tristram Denyer’s Iseulta was returned to dock with a suspected broken arm. Iseulta returned to race after dropping her ashore.

Port Douglas sailor Mal Richardson port-tacked the multihull fleet with his Nacra 36c, Malice, coming in with speed, leaving the rest in his wake. Richardson and his carbon cat set a new benchmark speed record when they contested this race in 2011, completing the course in 80 minutes. He was a touch slower this time, finishing in one hour 36 mins 13 seconds.

Crew member Mick Guinea said breeze was lighter than expected at the start. “But when we got around the corner we had a nice wind angle, although the sea was a little sloppy,” he said. “We got into the groove and two-sail reached to the corner and then carried a screecher (a spinnaker reacher combo) all the way to Bay Rock. We gybed too soon, looking back, but what can you do?”

Malice did not have it all her own way today. Graeme Etherton’s Crowther Windspeed 32, The Boat (from Townsville) won the multihull division overall from Ian Johnson’s Lightwave designed Salacia. Dennis Coleman’s Corsair Sprint MK1, Mistress, was third.

After claiming honours in Cruising Division 1, David Currie, owner of the Farr 40, Ponyo described the race as “A soldier’s course. We reached round the top, set a kite, reached to the next corner and beat to the finish.

“It was quite gusty – we saw 20 at the top end and hit 15 knots of boat speed. The race with all its reaching doesn’t suit our boat, so we’re hoping for something different tomorrow,” the Melbourne yachtsman said, despite beating Elena Nova and Zoe for the top spot.

On the Farr 40 Guilty Pleasures, Townsville co-owner Leon Thomas commented, “We had very close racing and good tussles with Ponyo and Zoe (Wayne Millar’s Murray 41 from Townsville). There was lots of reaching in the race, which is not to our taste, but you take what you get, and it was a lot of fun.”

Today’s pearler comes from Phil King’s Last Tango – no names, no pack drill. A crew member met an attractive young lady at yesterday’s layday festivities. He invited her back to the boat to see his etchings. She accepted, climbed aboard and had a look around. On leaving, the young lady miscalculated, missed her step, and into the water she went.

The crew member, being gallant, hauled her out and she went on her merry way, only to return with a diver, crying, ‘I’ve lost my purse, keys and things’. The crew member went to the navigation station and returned with a purse. ‘Is this it’, he enquired. ‘Yes’, the red faced lady replied. It will be her last tango with that boat.

And the crews who dress up in theme each day thought they had all the fun!

King said the Last Tango crew made the best of the day. “We had a great start and some close racing. The breeze was lighter than expected, but that was to our advantage. We rounded the top in front of our main competitors, but then had a couple of issues, like a wrap on our winch, and after setting a Code Zero, we were behind.

“But back on the wind, our extra weight (he said pulling at his stomach) and the fact we have so many wily old foxes on board helped us pass the competition again. By the time we got to the reef mark, it was a beat and a couple of tacks to the finish. I calculate that Wine-Dark Sea (Peter Lowndes) got us by about 20 seconds.”

Racing comes to an end tomorrow, with the final race expected to commence from 11am.