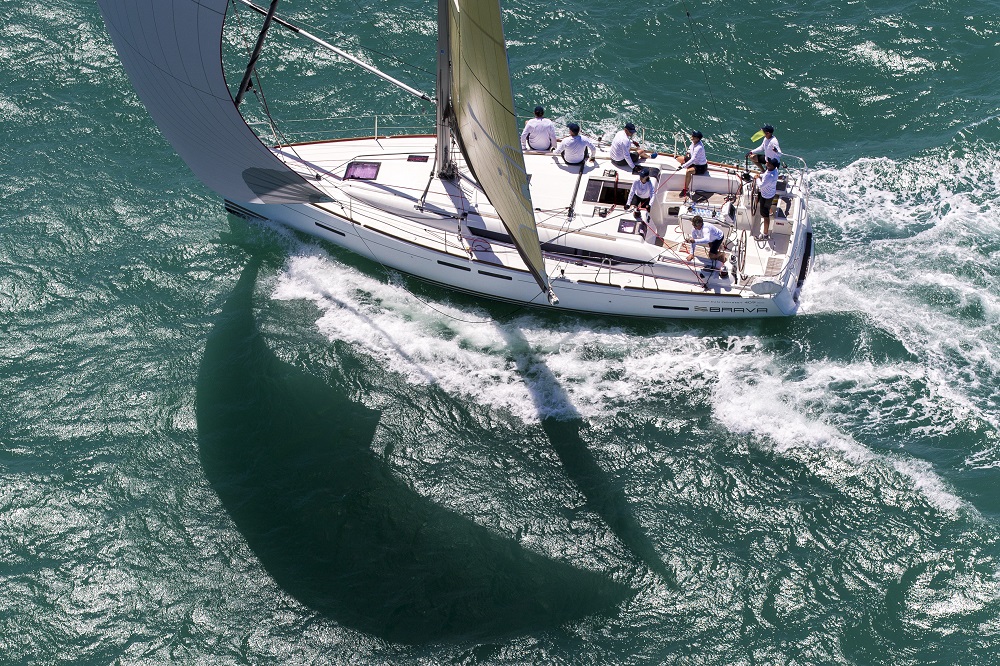 Unique is the only way to describe Sealink Magnetic Island Race Week which wrapped up today after the record 71 entries concluded their courses – some halfway around Magnetic Island to pretty Horseshoe Bay return, the rest on a shorter course to White Rock return.

Townsville Yacht Club has come up with the right recipe for those who make it this far north and are tired out from serious grand prix racing. It should be proud of the event which celebrated its 10th year in 2016.

Event Chairman and Club Director Mike Steel and his co-organisers have done a wonderful job from the ground up, this year taking over running the event from sponsor, Sealink.

The Club invited competitors heading here from Hamilton Island to a barbecue on the beach at Cape Upstart. Inaccessible by land, and totally unique to this event, around 100 people attended and dined on seafood donated by the Club.

“Competitors supplied the drinks. It was a wonderful night with a big fire on the beach. The seafood was fresh and it was really beautiful gesture enjoyed by all,” said Fair Winds owner, Mark Chew.

The location and setting is unique too. Conducted from Peppers Resort where the majority stay, a one minute walk from the Nelly Bay Ferry, Peppers has it all. Everything is within a one minute walk – the marina, restaurant, rooms, pools, a local IGA store and cafes. There is no need to wander far – only on lay day to experience the rest of the compact picturesque island.

Mike Steel, owner of the yacht Boadicca, along with Rear-Commodore, Tony Muller (owner of Brava), also support the event by racing at it, as they did again in 2016. TYC board members and general members are behind the event 100 percent, supported this year by entries from other parts of Queensland and as far flung as Victoria, NSW, South Australia and Tasmania.

“I am very happy with how it’s gone. It’s rewarding when skippers come up to you and shake your hand and thank us for what the Club has put together.

“When you walk around, everyone has a smile and is having fun. The whole mood we have tried to put into place – it’s a party, it’s fun – has caught on. I thank the 20 people on our team who help put Sealink Magnetic Island Race Week together and to our many volunteers who have worked so hard this week. We’re all looking forward to doing it again next year.”

Sealink Magnetic Island Race Week started with 21 entries 10 years ago; that’s equates to a 30 percent increase over a short period of time.

And the conditions and courses could not be complained about. It’s warm and mainly breezy. The opening day eased competitors in with 6 to 13 knots of breeze, enough to keep everyone interested and active. Day 2 was very light, but sunny and warm, and the final two days, after a lay day delivered the quality in easterly winds of up to 20 knots.

Elena Nova, chartered from Craig Neil by Andrew Pearson found the groove early on to claim first overall in IRC, counting four wins from five races. It is the fourth time he has attended the event and is just as enthusiastic as ever, despite an 'oops' in the windward/leeward race today.

“It (fourth) was our worst result – a result of too much Pommery champagne last night,” Pearson said. “We had to haul the spinnaker out of the water, but we didn’t hit the start boat. The rest was good. After all the effort Craig Neil (boat owner) has put into the boat, it has reached its potential.”

On the event as a whole, Pearson said: “I still believe what Bob Steel said last year; it is the best regatta on the eastern seaboard.” His crew concurred, as did those moored next to them on Champagne.

“Denis and his team did their usual great job – we had great racing and great conditions.”

Denis Thompson and his race management team set daily courses to suit the conditions, allowing yachts to return to the dock in time for the afternoon festivities, where it became one big party. On the penultimate evening, guests were ferried to TYC for a cocktail party.

Poppy’s owner Michael Phillips, who has come all the way from South Australia commented: “It’s a fantastic regatta, but we should have done better. The average age on our boat is 66 and we’ve all had a great time and we’d love to come back.”

Well known Sydney sailor, Peter Sorensen has done the regatta a few times. “We’ve enjoyed ourselves thoroughly, despite a few mishaps, including running into Middle Reef yesterday and breaking a jib halyard today.

“We’ve loved the entertainment and particularly enjoyed the MC (Scott Hiller) – he made the regatta for me – kept us entertained – he lifts the whole entertainment,” said ‘Sorro’, who chartered IRC third placegetter Botany Access Cocomo.

After a day on the water, it’s back to Peppers for the daily prize giving over drinks and barbecue food, or dinner at the restaurant, right in front of the action, where you can view the daily racing and dockside antics on the big screen.

It’s a fun regatta, and a few crews dressed up each day. Stanley Barnes’ Librian crew kept us guessing with different dress. Goddesses one day, Disney characters the next and on the final day it was the Supremes. Librian has attended every Sealink Magnetic Island Race Week since its inception and will be here again next year.

Because it is such a unique event, the prize giving is a buffet dinner in Peppers Restaurant for all competitors. Remember when we used to do that at regattas years ago?

For the first time there is a Perpetual Trophy – the winner of each division will have their yacht’s name engraved on this inaugural trophy. In another first, each crew of a division winner will receive a gold medallion.

Overall top three in each division: