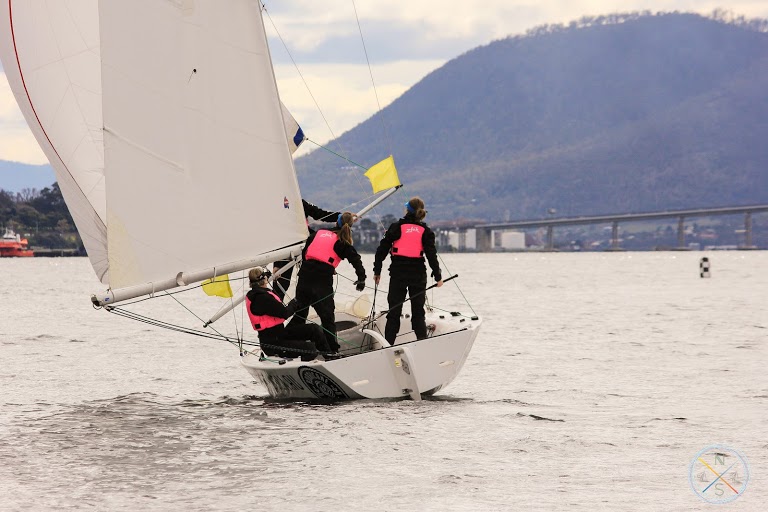 Light and flukey winds, at times none at all, on Hobart’s River Derwent, curtailed competition today in the Australian Women’s Match Racing Championship.  Only half the second round-robin could be completed.

Cruising Yacht Club of Australia’s Caitlin Tames was in good form in the light and flukey breeze which required smart tactical sailing.  She and her crew had three wins from four matches for a total of seven wins.

Fourth in standings with five match race wins is the Royal Yacht Club Tasmania/Athena Sailing crew of Samantha Bailey (helm), Jill Abel, Kirsty Gray and Amelia Catt.  However, they could score only one win today to add to their three wins on Friday.

Vanessa Dudley (Middle Harbour Amateur Sailing Club, NSW) and Clare Brown (RYCT/DSS) each had two wins today for a series total of four wins, as did Alison Dale (Sandringham Yacht Club, Victoria) who now has a total of three wins.

Kirstin Norris, who has entered for the CYCA/South of Perth Yacht Club, had one win today for a series total of three wins.

Race Officer Nick Hutton is confident of completing the second round-robin tomorrow morning and then conduct finals for the championship in the afternoon.