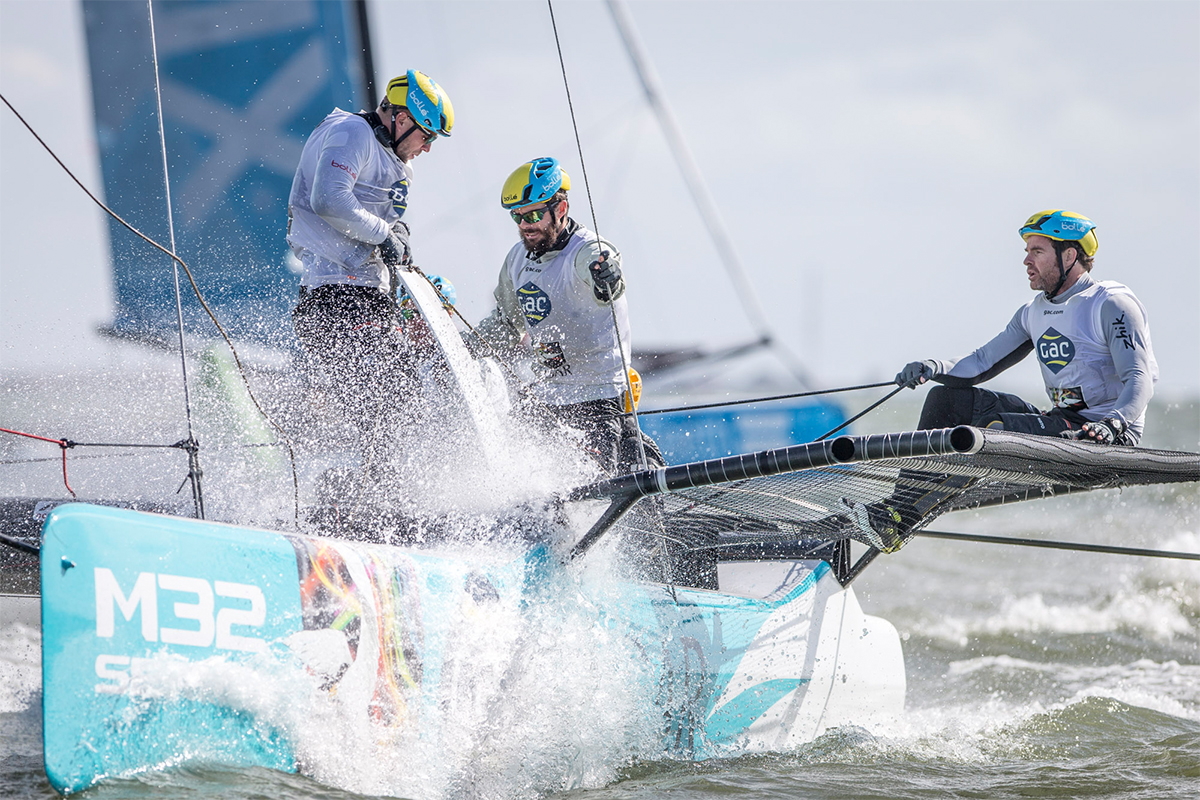 The fast and furious M32 catamarans had another perfect day of sailing in the “Battle of Helsinki” on Friday. The fresh breeze picked up towards the end of the day and last two races were sailed without guests on the hot seats. Mainsails were lowered to a reef through the whole day.

Ian Williams at the helm of GAC Pindar gave no room for speculation by winning all seven races of the day. The British team worked their way up to the top in every race, even if the others had their random moments of glory at the early mark roundings of the races. GAC Pindar has built a solid 24 points lead before the closing day on Saturday and other teams have to step up their pace to catch up.

The battle for Friday’s runner-up position was as close as it can get. Only two points separated the three contenders, Typhoon X Racing, Flux Team and Essiq Racing Team. Swedish skippers Måns Holmberg (Typhoon) and Nicklas Dackhammar (Essiq) got two points and a single point penalty respectively as a result of a collision in race 2. The M32 class rules strictly support clean sailing with the fast boats. Artemis Youth Racing skippered by Rasmus Rosengren had to pull out with a rudder damage just before race 4.

Before the final day of M32 Battle of Helsinki, Flux Team holds the second place only two points ahead of their closest rivals Typhoon X Racing. Also Essiq Racing Team is still fighting for a podium position just six points behind the leaders. Artemis Youth Racing was showing great pace in the early races of the day and they are hoping to have their boat fixed again for Saturday and a final fight on the water.

Local hot shots had their opportunity on the hot seats also on Friday. Two-time Laser Radial world champion, multiple Olympic contender and member of Finnish Parliament, Sari Multala, was all smiles after the winning experience on the water with Ian Williams and GAC Pindar. “That was supercool, next time we must have a Finnish team on the water”, said Multala on her return to the race village.

The last day of M32 racing in Helsinki this year will be kicked off at 2pm on Saturday at Hernesaaren Ranta.