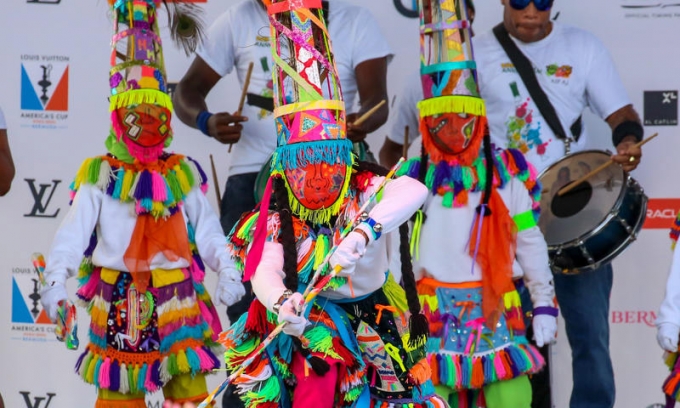 In the Opening Ceremony, Bermudian musical legend Gene Steede will be joined by the band of the Royal Bermuda Regiment, the H&H Gombeys and Gombey Evolution, Live Wires and the cast of “Proud to be Bermudian”. These acts combine to mark the Opening Ceremony as a truly Bermudian celebration in the home of the 35th America’s Cup.

The Opening Ceremony will be produced by David Durham of Yhoshi Productions and the Musical Director will be John Woolridge, both with huge experience of staging shows of this caliber in Bermuda.

After the opening acts have performed, 4-Forty-1, the official band of the 35th America’s Cup, will take to the stage to continue the party that will end at 10.30pm with a spectacular fireworks display. Red Bull skydivers will also be making an appearance, dropping in from the skies above Bermuda to join the party that will be taking place in the America’s Cup Village.

Before the Opening Ceremony starts at 8.30pm, the first day of racing in the Louis Vuitton America’s Cup Qualifiers will begin at 5.00pm with Jimmy “Pitbull” Spithill and ORACLE TEAM USA taking on Franck Cammas and Groupama Team France in race one, with the on-water action scheduled to end at 7.00pm.

Tickets to the opening day of the 35th America’s Cup are available now from www.americascup.com/tickets and start at just $10 for Bermuda residents. The full range of spectator experiences are available via the ticket website for 26th May and give access to the Opening Ceremony and the on-water action which starts that day at 5.00pm. Tickets are also available for all dates the America’s Cup Village is open between 26th May and 27th June and full details can be found at www.americascup.com/tickets.

On 26th May, the America’s Cup Village will open for business at 3.00pm and will close after the Opening Ceremony and party ends at 10.030pm.

EDITOR'S NOTE: It is to be hoped that ACEA has learned from the woeful opening ceremony in San Francisco which was frankly an embarrassment for such a prestigious event. More than half the audience had left before the end. Most, including me, still cringe at the truly amateur production that launched with a whimper what would become one of the legendary events in sailing history.