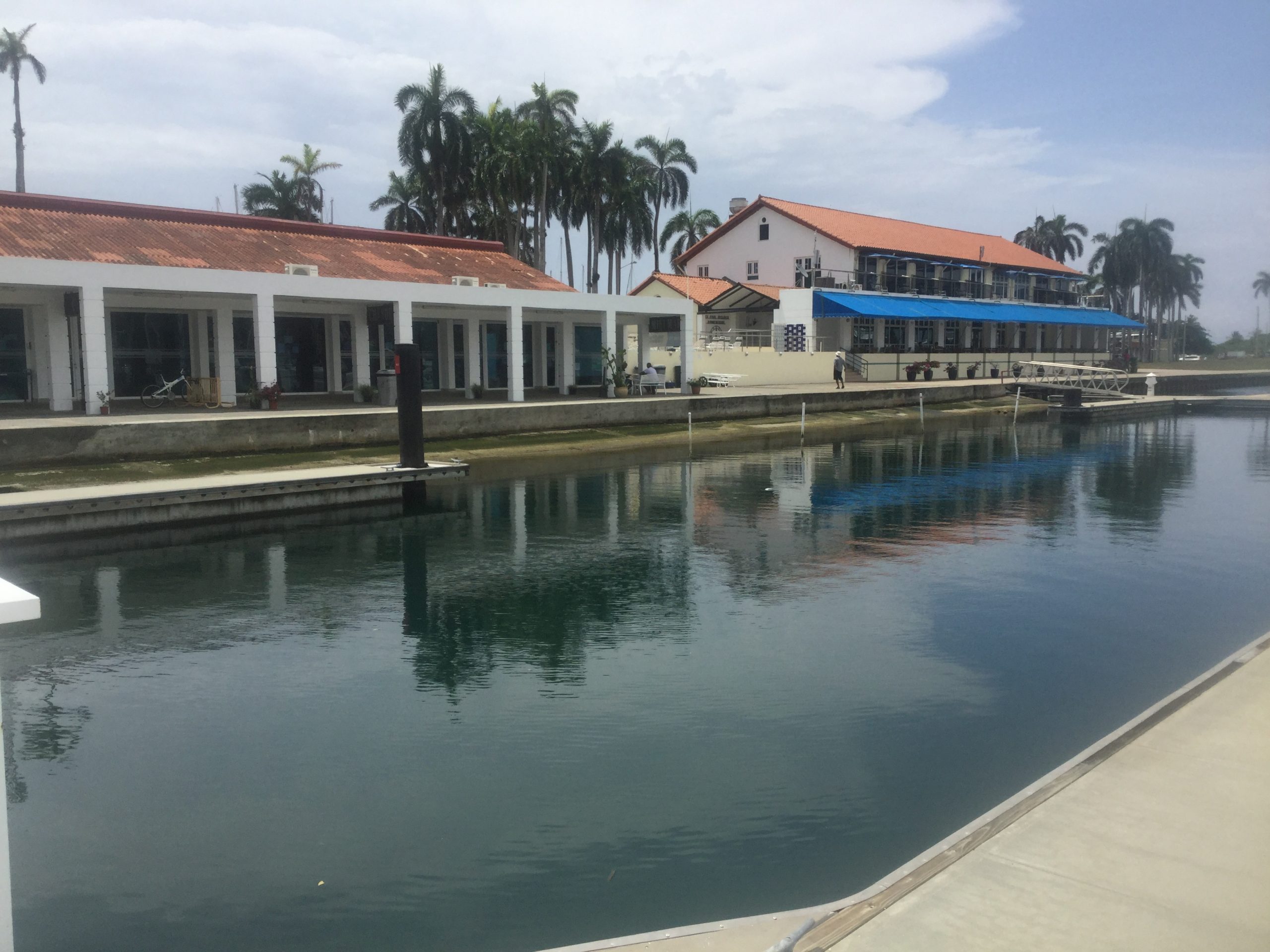 Building in the distance is the former US military barracks - Southern Command. Photo Jon Sanders.

I am back on the high seas.

In quiet weather, sailing, motor sailing, or motor boating I can clip the tiller on (quick easy). Then clip the Simrad electronic tiller pilot. Then I steer electronically.

Lots of buoys for overnight hiring. (Free during the day). Norman Island.

Because it is tropical hot getting the boat ready, plus I had to go to town to do clearance. Me thinks I will grab a buoy for the night. Cool down in the evening breeze, then continue in the morning.

There wasn't a single buoy – Not one. All taken up. Chock-a-block and my anchor stowed below. Bummer.

I will just have to tie up Shelter Bay Marina Colon Panama. 1060 NM distant.

As I write, still getting there.

Norman Island is uninhabited except for a super nice Beach bar restaurant.

Anchored close to the sandy beach, not far away is the “Willi” floating bar restaurant, good food & drink.

Young ones from Puerto Rica and the US Virgin Islands come in power boats. I could not possibly afford the fuel. Others are professional crew (girls and boys) from the charter boat fleets and still others come in yachts and fast boats that didn't (or don't) sink.

So it is the fashionable beach wear, beige or fawn cargo pants with white or dark shirt with boat's name on pocket or other casual attire.

It's just as the night wears on, (for some) everything becomes the opposite.

Comfortable all night broad reach. That is wind just aft of the beam.

Whilst passing 25 NM south of Puerto Rico the north east trade wind became stronger. With the current in the region made the sea lumpy, not so good.

Day 3, going on day 4, wind 25 kts NE, current doing everything to make the sea all over the place and everywhere.

One needs to be an octopus to make coffee.

Between 10 am and 3 pm very tropical humid. Bit Yukky.

All sorts of things happen on the high seas.

One throws biodegradable food scraps overboard. But they hit the rail. Worse they get stuck on the rail.

Can you imagine some person sitting in a deck chair on a Norwegian Cruise Liner looking at food scraps on the rail.

That would be enough to make the parliament of Norway spill a motion.

Finally it is drying in the cockpit, the seats dry, the floor dry. I throw the cockpit hatch open so I can stand on the step and have a good look around. But then a dumping wave lobs aboard and gushes down the hatch.

I didn't know whether to be frustrated, or satisfied, by my instant cool down.

I keep a bucket in the cockpit with a lanyard.

I fetch water out of the ocean and do the washing up then throw the grey water into the sea.

Oops I just threw out a spoon and a scrubber – the last of the greenies. Hope they sell them in Panama.

If one had a slice of bread and jam and dropped it. It would land jam side down.

Some of you would say that's Murphy's Law.

The more intelligent of you would say. “The idiot” (that's me) “put the jam on the wrong side of the bread”.

Anyway I had some more fresh following wind, which was good. Then moderate to mild all the way to Colon Atlantic end of the canal.

75 NM I did a slow zig zag so I could arrive daylight on the morning Sunday 30 April 17.

From 30 NM out I discovered ships, then more ships, then lots and heaps – most anchored. Some coming, some going and some not bothering to stop at all. They were coming from somewhere and going somewhere else.

At. 8 30am I cleared the heads into a wide calm flat harbour.

I was able to stop the yacht, take down the mainsail, put the cover on, mooring lines out and fenders over the side.

Royal Perth Yacht Club advised the Marina “I was coming” and I arrived.