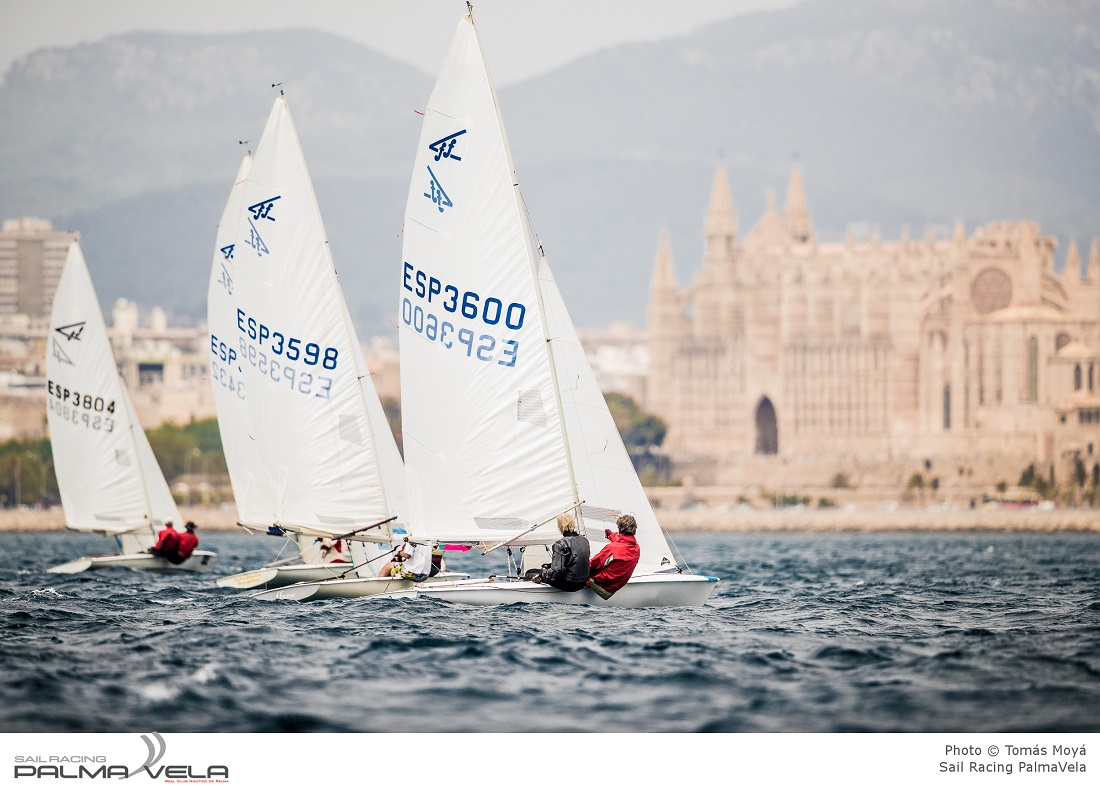 A trio of Rio Olympic gold medallists today worked a particular alchemy in order to win the one and only race for the 12 strong Wally class on the second day of Sail Racing PalmaVela on the Bay of Palma in Spain.

Croatian 470 heroes Sime Fantela and Igor Marenic, who clinched their nation’s first ever Olympic sailing gold medal in August in Rio are joined on Nahita by Argentina’s Nacra 17 gold medal winning helm Santiago Lange. Together they conspired to win a shifty, challenging windward-leeward race and take the overall lead for the Wally fleet at their first major circuit regatta of the season.

A clear start and the ability to hold a prime early lane out to the preferred Palma Bay left side of the first upwind was one component of their success. But extra speed and power from their new rig and sails – as well as a radical ‘diet’ for the Wally 80.6 to lose a little weight – has rendered Nahita even more competitive, particularly among the four Wally 80s which are their closest rivals. Two Wally 80s lead the class, Nahita sharing the same 5pts aggregate as Philippe Ligier’s Wally 80.

“It is great to have Santi on the boat as well. He is a great sailor.” Smiled Fantela.

“The first important thing was choosing which sails to take with forecasts showing everything between five and 25kts. We had these decisions sorted and prepared the race plan pretty well. We could then stay close to the big boats and we were even ahead of some 93s but most importantly all the Wally 80s. Our main goal is the 80s fleet which is very, very competitive. We rate one point ahead so we are paying the most.”

Patience was a virtue required all the way through the Sail Racing PalmaVela fleet of close to 130 boats racing on three course areas in 18 different classes today. Conflicting breezes on the Bay of Palma left the winds too unstable to get racing under way and long delays were required to wait for equable racing breezes.

The ORC, IRC and Classics raced a coastal passage planned to be between 18 and 32 miles while all the other fleets raced in the bay. Most of the bigger boat classes only managed one windward-leeward contest.

Principal Race Officer Gaspar Morey reported: “We started the coastal with a wind from 65-70 degree, but we had to shorten the course. On the Delta race area, for the Wallys, Maxis and Swans, they did one windward leeward but they started really late, because the wind was very shifty, then the transition arrived and the conditions were not good enough for a second race. On the Bravo race area we managed to complete three races for the AICO J80 and two for Sotheby's Dragon and Flying Fifteen. Overall it was a tricky day, but happy because all classes could complete races”.

After Momo won both races for the Maxi72 Class on the opening day, Hap Fauth’s Bella Mente wriggled clear after positioning themselves best for the shifts and big changes in pressure on the first beat. They lead Dario Ferrari’s new Cannonball at the first mark and went on to win by one minute and 16 seconds – almost the same time margin as Momo earned yesterday. Bella Mente’s tactician Terry Hutchinson pointed to their better start today as the one thing he felt they did better today:

“You know the reality is we sailed the same way yesterday as we did today only we got a better start.

“There is so much in the starting and yesterday Momo executed a nice start. In Race two they were quite slippery upwind. It was quite fluky today. Tomorrow and Sunday will be challenging too.”

Pre regatta training on their home waters made a winning difference today for the Mathilde crew in the debuting ClubSwan 50 fleet. Tactician Sacha Pelisson, a French 470 Olympic dinghy sailor, ensured that Mathilde made their best start yet and were able to control their rivals from early on.

But after four races it is still Earlybird – which finished second today – which leads the class.

Tactician Pelisson recalled:
“Conditions were quite challenging. We are still discovering the boat as I think everyone is but I think we have good speed. We had a great start and really from there it was about managing the risk and staying ahead. The team is quite new but we have a core group which sailed together on a Mumm 30 and another Wally.

“We received the boat a month and a half ago and had a week's training out of Saint Tropez and then a regatta in Marseille. We are still learning. In Marseille we raced against three TP52s and were close to them on handicap so we had close racing with them. We had windy conditions and pretty much pushed the boat to the limit. It is a lot of fun and exciting. Mast tuning and crew weight are very important as is crew coordination.”

But the only team with a perfect scoreline from their four races so far remains Christian Plump’s Elena Nova which also won their class at this regatta last year. Although they lead early in the windward-leeward race, the breeze shut off and left five boats compressed, fighting for the line together. Elena Nova managed to glide across to keep their tally of all wins intact.

Tactician Sten Mhor said:
“It was very, very tricky. Our boat is going well even with some older sails we are using. It is good and I like that we can sail with sails from 2013 and 2014 and are still competitive. We have a couple of boats missing here but it will be full on for the Copa del Rey with a few good Italian boats here for example.”
In the ORC fleets Class A’s coastal race was won by Audax Energia, the Barcelona based TP52. Class B saw the Grand Soleil 43 Il Corvo winning the 20 strong division. Other ORC Class winners were Airlan Aermec (ORC 1), Just the Job (ORC 2), Yabadaba (ORC 3) and Diafreo Mallorca (ORC 4).