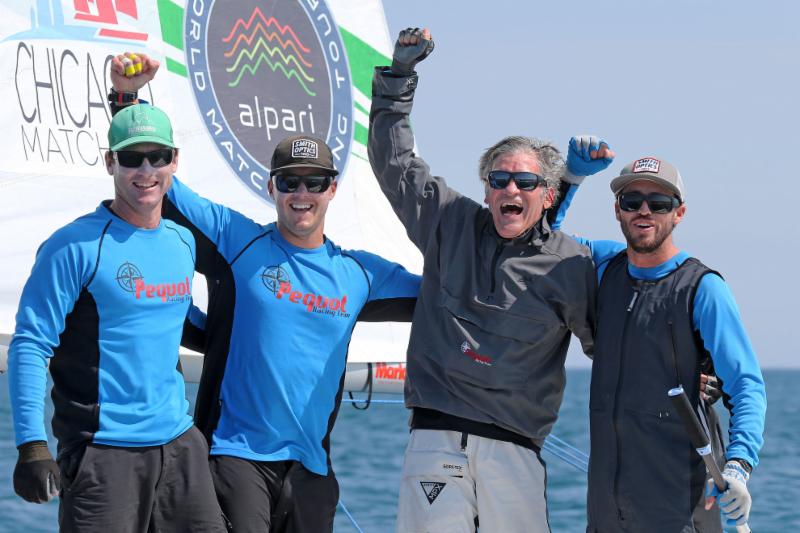 David Storrs and his Pequot Racing team of Taylor Canfield

Chicago, IL — Connecticut-based David Storrs and his Pequot Racing team of Taylor Canfield, Andy Escourt, and Hayden Goodrick have won the ISAF Grade 2 Chicago Match Cup Grand Slam. Storrs and team were undefeated today, beating Chris Steele and his 36 Below Racing team from New Zealand, the top-ranked team at the event, on a definitive score of 3-0 in the Finals, after also defeating CMRC's Don Wilson 3-0 in the Semi-Finals.

“This is the most exhilarating feeling in my life in sailing,” said Storrs. “At age 71 there are not many things that can get my excited any more, but this was certainly the best sailing regatta I've ever had. The team work was phenomenal, like a well-oiled machine, and Taylor and I were in sync so that our moves were smooth because we were anticipating situations and not just reactive. This was really great!”

In the two remaining Quarter-Final matches from yesterday, both went to a fifth match to conclude, with the two teams under must-win pressure to win Match 4 doing so and then going on to win their final match to advance to the Semi-Finals. Thus Don Wilson defeated Chris Poole 3-2, and Sam Gilmour also came back to defeat fellow Australian Matt Jerwood 3-2.

In the Consolation round, Jerwood then went on to lose also to CMRC's Steve Lowery, but then defeat Poole for 7th place, while Patrik Sturesson from Sweden first defeated Poole and then Lowery to win 5th place.

And in the Petit Final after losing to Steele 1-3 in the Semi-Final, Gilmour defeated Wilson 2-0 to take third place.

Storrs had high praise for the event, the boats and match race sailing in the US: “This was outstanding for us to have this opportunity to compete among the top teams in the world. Between here, Oakcliff Sailing Center, and other facilities in the US we have so many ways to get people into this thrill of match race sailing. I wish to see more people take this up, as it really is exciting. I also really like it here in Chicago because these TOM 28's are great boats to sail in all conditions.”

Topping a field of 12 teams from five nations, this is Storrs's best result yet at a Chicago Match Race Center event and in this year's 2015 USA GRAND SLAM series, where he now takes the runner-up position on 185 points. The current GRAND SLAM leader is Sam Gilmour and his Neptune Racing Team from Australia, who by placing 3rd here in Chicago now has 210 points in the series.

The next stop in the GRAND SLAM series is the Detroit Cup at Bayview YC, with racing starting on Thursday, August 27 and proceeding daily through Sunday, August 30th. Ten teams will be on hand, with seven coming from Chicago coming to join the competition in Detroit.

The top team in the series will be determined in Detroit, and will receive an automatic invitation to the oldest match race event in the US, the 2016 edition of the Congressional Cup next spring in Long Beach, CA.