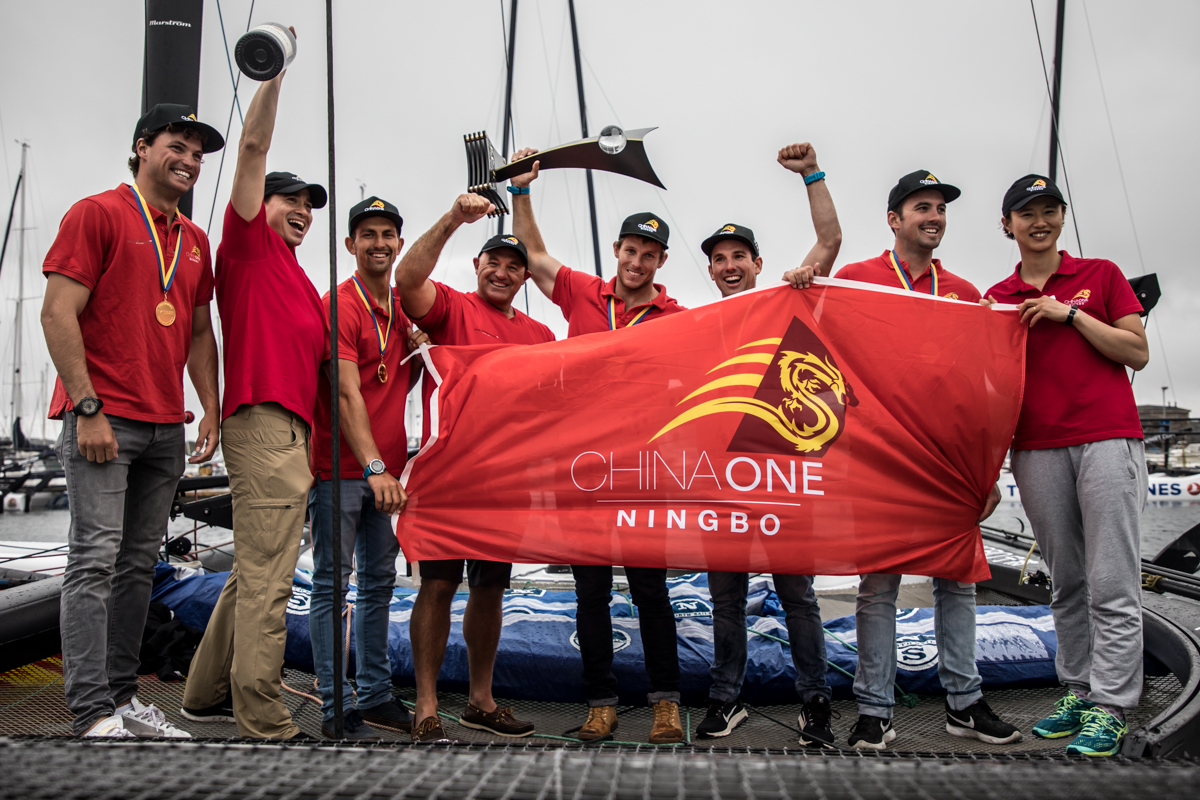 Phil Robertson and the crew of ChinaOne Ningbo have won the M32 World Championship in Marstrand, Sweden. With rain squalls gusting up to 40 knots, principal race officer Mattias Dahlstrom was unable to hold any racing on the final day, and Robertson’s nine-point advantage on the leaderboard meant the New Zealander becomes the winner of the first ever world championship for this lightweight 32-foot catamaran class.

Robertson said he’d rather have raced but added: “It's part of sailing, you're dictated to by nature, and I think that's the beauty of the sport. You've got to take whatever comes and unfortunately it's ended like this. Too windy to race, it would have been nice to go out there and seal the deal on the race course, but I guess Mother Nature did it for us.”

The driving rain of Sunday came in stark contrast to the previous three days of glorious, sunny days in Marstrand. “The racing here has been incredible,” said Robertson, who competes across a number of Grand Prix circuits in the sailing world. “A fleet of 15 M32s racing on one course is spectacular and it's also very challenging. Reaching starts are very tough to get into the right position with that many boats. It's very easy to be swallowed up by the pack. You're fighting for every inch you can grab and every boat you can pass. Marstrand has really delivered, and Cape Crow Yacht Club and all the volunteers have put on a great event.”

The battle for second, third and fourth place was very close but it was Jonas Warrer who came out on top of that fight. The 2008 49er Olympic gold medallist enjoyed the frenetic reaching starts in these carbon-fibre speed machines. “It’s definitely something different to what I’m used to, a new experience for everyone. The adrenalin is really pumping for those first 500 metres. It’s really close racing but because everyone’s on starboard tack, I think it’s maybe less dangerous than a traditional upwind start.”

New Zealander Chris Steele steered CFA Sport Racing to third overall, just two points ahead of top Corinthian skipper Don Wilson at the helm of Convexity. “It would have been great to make the podium, but we’re happy with our performance,” said Wilson whose Chicago Match Race Center will host the next M32 World Championships in September 2018. The owner-driver makes no secret of his desire to beat the professionals on home waters next year, and his performance in Marstrand proves his goal is not just a pipe dream. “We weren't that far off here. With slightly better starts we might have done it. I think our speed and our crew work around the course was good enough to win.”

Håkan Svensson may have finished second from last in the 15-boat fleet, but for the Swede this regatta was another major milestone in establishing the M32 as a powerful international class offering the best possible racing. “To get from a dream just five years ago to where we are today makes me very happy,” said the owner of M32 World, “and now to pass on the baton from the Cape Crow Yacht Club to the Chicago Match Race Center is great, because Don has been a big supporter of the class from the very early days.”

While the M32 class has certainly attracted professional sailors of the highest quality, the ongoing drive is to bring more Corinthian sailors into the fleet. Wilson hopes to see more owner-drivers on the start line in Chicago next year. “The M32s look a lot more scary than they are when you’re actually sailing them. The thing about them is you go very fast but you can also stop very quickly. I find the boats are just a ton of fun to sail, a lot more interesting than the traditional boats I've sailed in the past.”

Robertson echoed those thoughts. “The boat's a beauty, super simple, easy to set up, all one-design, equal as they can be. It's man against man. I think that's what the sailors want. If you're a purist and want to do some proper competitive sailing, that's what we've had this week. I can’t wait to do it again.”