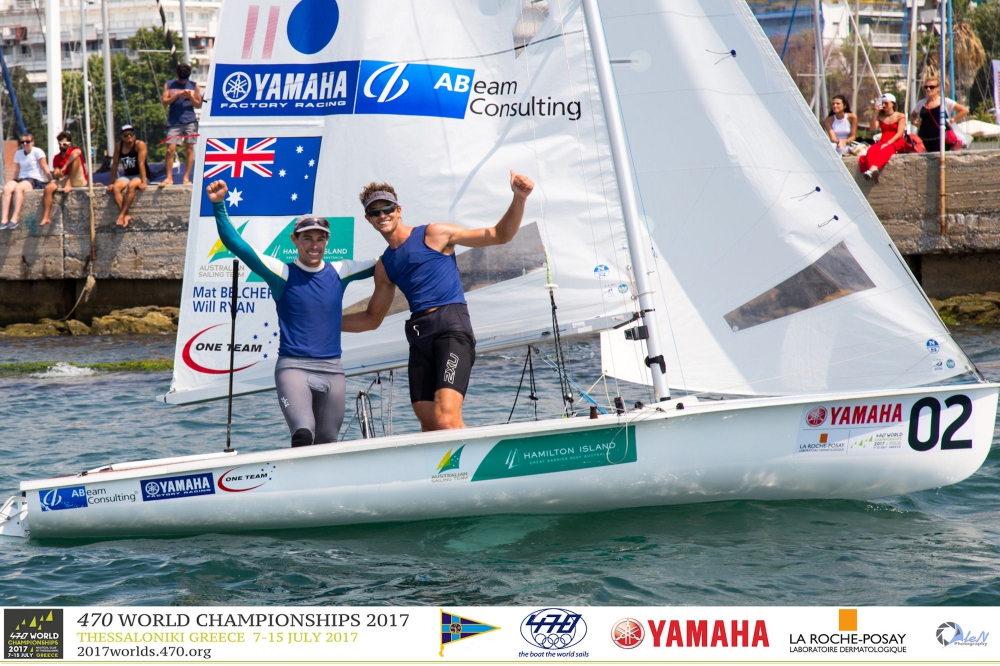 In the 470 Women, any one of the top four going into the Medal Race had a punt at a medal, with the series leaders Agnieszka Skrzypulec/Irmina Mrózek Gliszczynska already guaranteed gold or silver, while the three boats behind would tussle for silver and bronze.

In the 470 Men the podium chancers were more clear cut. Series leaders, Anton Dahlberg/Fredrik Bergstrom were guaranteed either gold or silver in a ‘who dares wins’ first to the finish face off with Australians Mathew Belcher/Will Ryan. The battle for bronze was between David Bargehr/Lukas Mähr and Deniz Cinar/Ates Cinar.

The 470 Women got off first at 1415 hours for their short, sharp twenty-five minute windward/ leeward race, followed by the 470 Men.

470 Women
Gold to Poland in a stunning delivery of performance from Agnieszka Skrzypulec/Irmina Mrózek Gliszczynska. The pair finished the Medal Race in 7th place to take their first ever World Championship medal with a 6 point margin.

Mrózek Gliszczynska grinned, saying, “For me it is unbelievable. I had said to myself I would not waste time and would come back stronger, but I didn’t know we would come back this strong,” in reference to the injury that kept her out of the boat for seven months.

“I am World Champion, I am so happy, I cannot describe my feelings. I can’t believe we are the best team in the world, what can I say.”

Describing the race, Mrózek Gliszczynska said, “At one point Hannah was second, and we could have lost, but we were careful.”

Skrzypulec continued, “I wanted to fight with Hannah at the starting line, but it was very risky, as there was a black flag flying, so one small mistake and we could lose the race easily. So there was a moment when I gave up fighting with her hand in hand and just tried to find my own way. I was cooling myself down the whole race, because we had nerves and the weather was mixing all the time and I knew I had to protect my position.

“This is a dream come true, nothing more nothing less,” added Skrzypulec. Today, Skrzypulec makes Polish sailing history for the second time, building on her and Poland’s first appearance in the women’s 470 event at the Olympics in 2012, and now becoming the first Polish team to win gold at a 470 World Championship.

For Polish sailing, their gold medal is a huge triumph for Olympic dinghy sailing, and a feat last achieved by the renowned Mateusz Kusznierewicz in 2000 at the Finn Worlds, four years after he won the nation’s first Olympic Gold.

“I think this is a good example for the next generation,” continued Skrzypulec, “and now they can have some hope they also can achieve it if we did it. This is really important. For me it was always my big dream after winning Trofeo Princessa Sofia last year to win the 470 Worlds. I have watched other teams win Worlds, and finally I now have the feeling of what it is like.”

Silver to Hannah Mills/Eilidh McIntyre and bronze to Tina Mrak/Veronika Macarol (SLO).
“It’s been really good fun and the racing was super tight, especially when we got into gold fleet the racing was a real battle,” explained Mills.

Hugely experienced independently, the 470 Worlds is only the second event they have raced together. Whilst Mills already counts a World Championship title alongside her Rio 2016 Olympic Gold, for McIntyre today’s silver medal is a career best achievement.

Mrak/Macarol also return to the race track after an absence due to injury. Their highest leaderboard position at any previous 470 Worlds was 5th, although they picked up the silver medal at the 2015 470 Europeans.

To secure bronze, today they had no option but to cover the Dutch pair of Afrodite Zegers/Anneloes van Veen, and hold them at the back of the fleet.

“We really wanted to win a medal, so we are really happy for the week and especially for these light wind conditions where normally we are not so strong,” explained Mrak.
“We had all our concentration on the Dutch and just followed them through the whole race course.”

470 Men
An epic medal fight in the 470 Men meant teams had no choice but to hunt each other out.
Australia’s Mat Belcher/Will Ryan crossed the finish in first place and wrapped up gold, the seventh World Championship victory for Belcher, and fourth with Ryan.

The team is invincible, and continuously manage to dig deep, take control and fight through a fleet whatever the mountain they face.

“I think it is down to our unique partnership and personalities,” reflected Belcher. “We go to each of the events trying to be the best we can and we often find ourselves in tough positions and we try to find any opportunity we can. I am really proud of Will as the conditions here have been tough and really physical.

“We found a small opportunity yesterday,” he said in reference to their 7,1,4 scorecard which dialled them to 1 point behind the Swedes. “Full credit to the Swedish pair as their performance all week has been amazing.”

Series leaders going into the day, Anton Dahlberg/Fredrik Bergstrom were assured of gold or silver. Not the ideal Medal Race though, as believing they were over the line at the start, re-crossed and fought hard to climb their way back through the fleet to finish 6th.

An unnecessary choice, as even with a penalty score in the Medal Race the silver was guaranteed and today’s the focus was all about gold. By the time the Swedish re-crossed the starting line, the rest of the fleet were 150 metres ahead, and they had effectively handed the Gold to Australia.

“I will remember that for the rest of my life, that’s for sure,” grimaced Dahlberg. “You know that margin of a second when you have to decide, Freddie and I looked at each other, ‘was it us, maybe we said,’ and we went back. We most probably should have discussed this more before the start.

“It was really, really bad. We gave it away a bit too easy. These conditions really suit us and we were up for a really good battle and it could have gone either way. We were in a really good starting position, to windward of them and in control.

“We were really pumped up and enjoyed the race, but we wanted to win. This will be instrumental for our future training.”

“I am super proud and we have sailed really nice this week,” added Bergstrom.
Ninth in the Medal Race gave David Bargehr/Lukas Mark of Austria the bronze medal.
“I feel amazing, not just for us but because it is the best ever result for Austrian 470 men, as no-one else has ever won a medal,” smiled Bargehr.

“We have worked really hard, and we had a lot of setbacks with injury last year and we had to do a lot to recover.”

Mahr added, “This is the most important event of the year as every country sends their best sailors here and it is why we focus on this event a lot. We were in a good place at this Championship and were in third after day 2, which gave us some pressure, but we tried to stay there and now it has worked out.”

Turkey’s Deniz Cinar/Ates Cinar opted not to go back at the individual recall, led the fleet around the track to the finish, but were over the start. Taking the penalty score meant the pair missed out on the bronze medal and finished 5th.

Of note was the success of China’s Zangjun Xu/Chao Wang who achieved the nation’s first ever appearance in a Medal Race line-up. They crossed the line in 5th to finish 8th overall.

Ahead of them, two of the fleet's junior teams, Hippolyte Machetti/Sidoine Dantes (FRA) and Giacomo Ferrari/Giulio Calabro (ITA), showed they are knocking on the door of the big names. They will next face each other at the 470 Junior Europeans in three weeks' time.