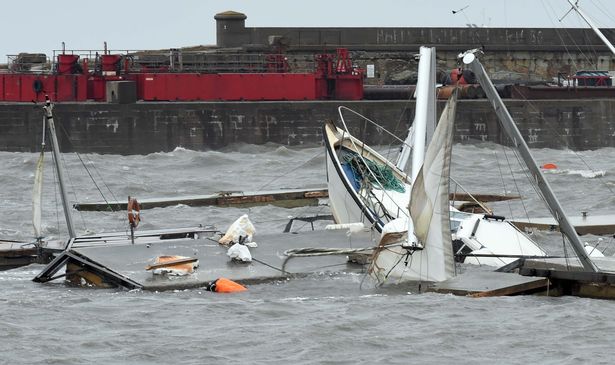 Boats have sunk and a marina has been damaged because of severe gale force winds caused by Storm Emma.

The winds have caused huge waves at Holyhead Marina damaging many boats.

p:nth-of-type(2)”,”sizes”:[[8,8]],”hideOnSensitiveArticle”:true,”relativePos”:”after”,”additionalClass”:”in-article”,”name”:”div-gpt-ad-vip-slot”,”type”:”VIP”}” data-response-start=”3978.1600000000003″ data-type=”gpt” data-requested=”6069.78″ data-google-query-id=”CLbApYXk09kCFQ4vlgod7gcMeA” data-timer-slot-rendered=”7753.06″ data-rendered-width=”8″ data-rendered-height=”8″ data-response-end=”10566.32″>
Up to 80 boats are believed to have been sunk or wrecked. One of the boats that has sunk was 30ft long.
Shocking images revealed millions of pounds worth of destruction as boats were smashed against rocks by massive waves during the early hours of Friday. Around 70 private vessels and 10 commercial boats are believed to have been affected.

Pontoons were also damaged, as was the marina itself with witnesses saying it looks “completely destroyed”.

Fuel has leaked into the water and the coastguard is now looking at how it can best protect the area from further damage.

Nobody has been hurt in the incident but the coastguard and police urged people stay away from the marina for their own safety.