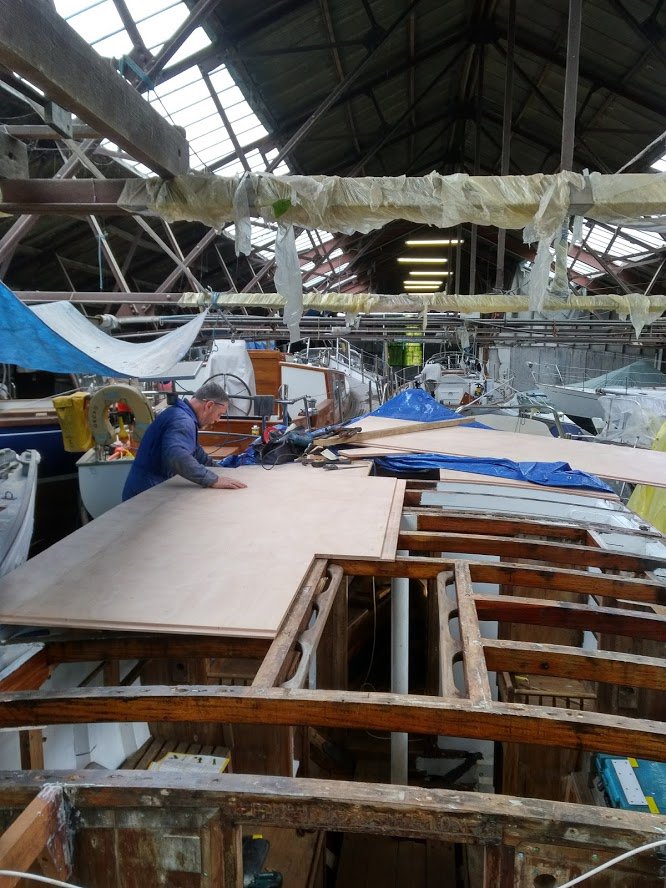 Lively Lady undergoing restoration work. Photo Around and Around.

A local entrepreneur and philanthropist has taken the helm of Around and Around, the charity that looks after Sir Alec Rose’s Lively Lady.

Mark Smith, from Old Portsmouth, has become the new Chairman of the Charity, which looks after the boat on behalf of Portsmouth City Council.

The a former Royal Navy sailor and businessman will drive forward the seven month renovation project, that will see the vessel restored to her former glory in time for the 50th anniversary of Sir Alec’s epic solo circumnavigation.

Mr Smith commented: “It is an honour and a privilege to become the Chairman of Around & Around, which is the custodian of Lively Lady. The yacht is a true icon of the sailing world, but more than that, she is an important part of Portsmouth’s maritime history and our City’s story.

“The voyage by Sir Alec showed that so-called ordinary people can do the most extraordinary things. It inspired a generation of young people and sailors to get out on the water and I hope as we approach next year’s important anniversary we can reach the next generation and encourage them to do the same.”

The announcement of Mr Smith’s appointment was made as work continues to restore the yacht. The historic sailing boat, built in 1948, was moved last month from the Camber Docks in Portsmouth to the Hayling Yacht Company, which is overseeing the work to repair, refurbish and repaint the vessel by a team of volunteers.

The restoration project is being supported by ocean racing legend Alan Priddy, the founder of Around and Around and outgoing Chairman and skipper of Team Britannia. He sailed the yacht around the world in 2006-08 with a group of young people and adult volunteers from Portsmouth. Following the voyage he agreed to become the custodian of the vessel in a deal with Portsmouth City Council.

As part of the agreement Around and Around promised to refurbish the 70 year old vessel, replacing the deck and undertaking some minor modernisation work to the galley to ensure she meets modern health and safety rules.

Mr Priddy commented: “I want to wish Mark the very best as he takes the helm of Around and Around and the stewardship of Lively Lady. She is an incredible yacht, which has sailed twice around the world. The last time she did this was just a decade ago, giving more than two-dozen young people from our area the opportunity to experience a voyage of a lifetime. Our ambition for Lively Lady, once refurbished is to mark the anniversary of Sir Alec’s return 50 years ago and to continue to provide opportunities for young people from Portsmouth and Hampshire to experience sailing.”

Lively Lady has been lifted out of the water and placed under cover to allow an experienced shipwright to oversee the work that will see the deck replaced, engine refurbished and the wheelhouse rebuilt, before she is repainted in the distinctive sky blue that makes her so recognisable. Already much of the damaged wood has been repaired and replaced, while new keel bolts have been fitted and work has started on the deck substructure.

In total the work is expected to take up to seven months, when she will be refloated in time for the celebrations being organised by the charity and local community. It is hoped that these celebrations will include sailing along Southsea seafront recreating the return of Sir Alec, with a member of the Rose family taking the helm.

Mr Smith concluded: “We are incredibly lucky in Portsmouth to be home of the Royal Navy, a thriving dockyard and the base for both an America’s Cup Team and Team Britannia the round the world powerboat record attempt. But too many people think sailing is an elite pursuit – it is not, as Sir Alec showed.

“Working with, the community, local sailing clubs and hopefully the Outdoor Centre we want to encourage, inspire and drive greater participation and who knows, perhaps we might find the next Sir Alec.”