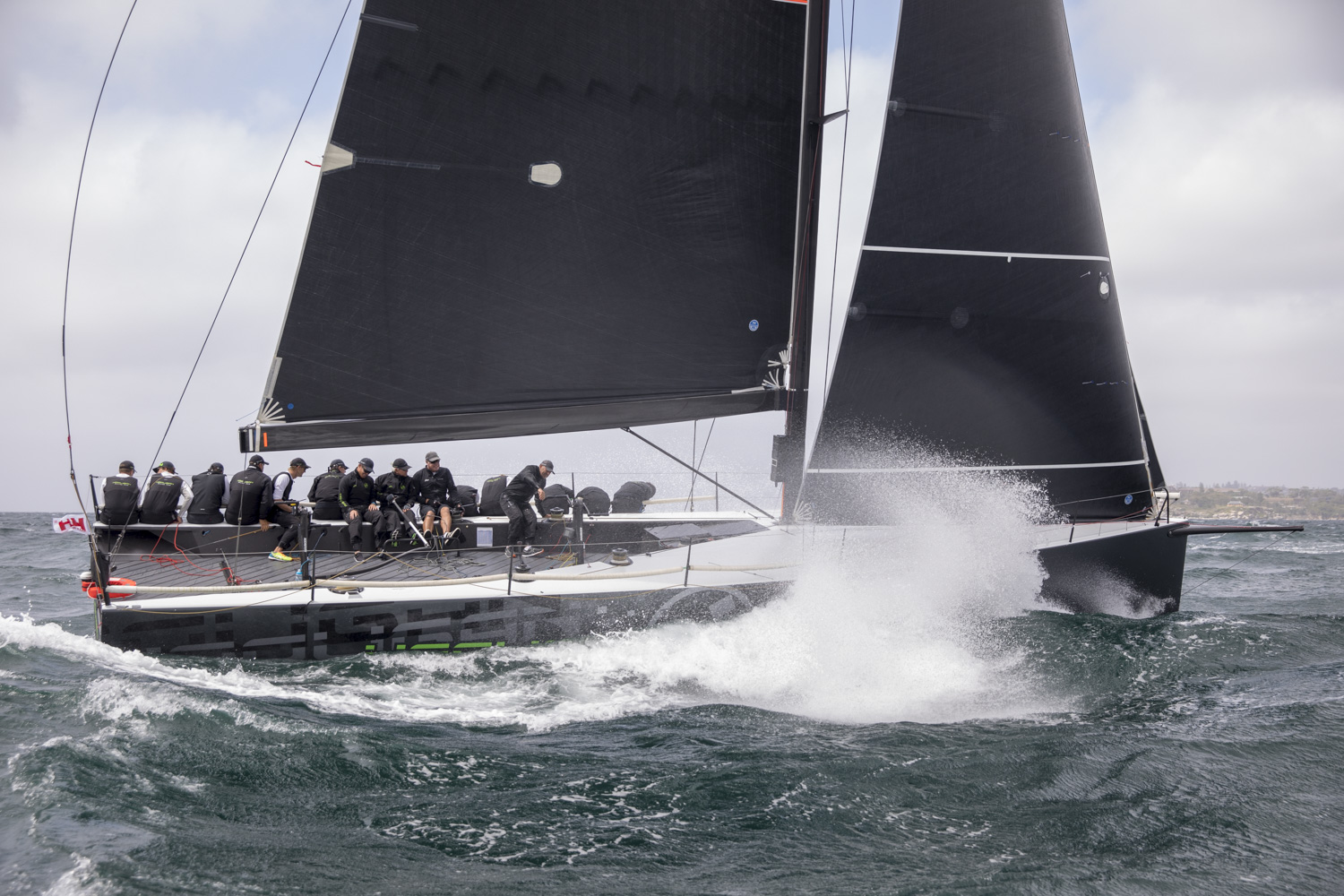 The final day of the Sydney Harbour Regatta was more than it was cracked up to be as the forecast strong southerly, contrasting with yesterday’s ideal nor’ easter, meant abandoning racing on some courses, while the remainder were tested to the max.

David Staley, Sailing Manager for Middle Harbour Yacht Club which hosts the event, explained: “The wind was all over the shop and varied on different parts of the Harbour. We recorded 28 knots gusting into the mid-30s at the Wedding Cake, 18 to 20 knots on the Sound and 15 plus at Rushcutters Bay.

“It was choppy on a big swell off the Heads, so we brought the Open (IRC/ORCi) divisions and the Sydney 38s inside to do one race on the Harbour – and got them away on time. We managed to get in as much racing as we could with what we had,” Staley said.

“We rely on our experienced Race Officers to give us feedback from which we can make good decisions. In the case of the Cavalier 28s contesting the NSW Championship, their Association decided to abandon for the day.”

Based on their One-Design result, Craig Mitchell’s Centaurus is the well-deserved NSW Cavalier 28 champion, following a trio of bullets yesterday, with Flying Circus second and Scuttlebutt third. Under PHS, for which the SHR component is decided, Stephen O’Halloran came out on top with Blind Justice, Scuttlebutt in second and Flying Circus third.

“Three of us were very close; Flying Circus (Peter Donnelly), Scuttlebutt (Greg Purcell) and us. Yesterday was a great day, beautiful weather, the wind came in late and it was novel for us having swell – a bit of a challenge,” Mitchell clarified.

“Based on where the course was, we weren’t keen to go out, so we’re happy the decision was made to abandon and happy for our win,” he said.

Among the abandonments was the Yngling class, also contesting its NSW Championship. What it means is that yesterday’s leader after three races, Miss Pibb (Hamish Jarrett) is the 2018 NSW champion. Triple Olympian, Karyn Gojnich (Evie) crew finished runners-up.

“We were looking forward to today – one of my crew, Max Hayman, was going to steer. We were disappointed, but I guess the weather has rules of its own,” Jarrett said.

“That’s the first time I remember racing being cancelled for the day in 12 years of the Sydney Harbour Regatta. It had to happen sooner or later. Credit to the race committee for making the decision when they did, rather than have us sitting around all day.

“It’s good to win the Championship, thanks to my crew Max and Chris Pearson. We’re now looking forward to the festivities tomorrow night (prizegiving) at Middle Harbour,” he ended.

Only one race was held to decide the new NSW champion in the Sydney 38 class and the Open class (IRC/ORCI Divisions 1 and 2.

Following an incident in the Sydney 38s Race 1 yesterday, second placed Conspiracy’s one point buffer became three points after an arbitration hearing. It did not remove her from second place, as Zen dropped down the board after being disqualified from Race 2.

But the Conspiracy crew was able to turn their fortune around, winning the regatta by one point from yesterday’s leader, Challenge (Greg Croak) after taking today’s race which Croak finished fifth in, to win, ironically, by one point from Challenge.

Conspiracy is owned by Peter Byford and David Hudson (the latter steered), who must have had nerves of steel to snatch victory from the jaws of defeat.

And being hauled inside the Harbour to race did nothing to dampen Marcus Blackmore’s enthusiasm either, as he and the crew sailed his recent purchase, Hooligan, to their fourth win from four races in the Open Class Division 1.

It was Blackmore’s first outing with this two year-old champion TP52 which formerly raced in Europe as Azzurra. And he was as pleased as punch with his star-studded crew and their result.

“We just did a bit of training the day before. I’ve got a very talented crew – and Victor Kovalenko as our coach He said as a team we went really well – and I think that’s half the battle. We got our spinnakers up and down more quickly than on our previous TP52. We had a wonderful run – 24 knots downwind today. This boat is easier to steer, doesn’t dig the bow in like the last one did. We’ve got a good boat, no doubt about that.”

On board, Blackmore said, is “Tom Slingsby, one of the world’s best tacticians. Don Cowie – part of Team NZ, he’s been sailing Dragons with me and sails Sled in the Super Series. Will Ryan (Olympic 470 silver medallist) is a gifted young man and it’s a pleasure to have him sail with us. Will Oxley, Richie Allanson, Tim Wiseman, Billy Merrington – a good crew.

“It was a masterful display of sailing considering it was our first regatta, but we can always improve,” he said, going on to throw down a challenge: “There are nine new TP52s being built in Europe, so if anyone wants to give us a run for our money – there’ll be a few boats on the market.”

Ed Psaltis too, is having a ball with his Sydney 36 Midnight Rambler. Purchased last year to replace his ocean racer of the same name, Midnight Rambler won four from four, sharing the Race 3 win with his closest rival, Jack Stening and Colin Gunn’s Stormaway.

“We had a great weekend. I can’t compliment my crew enough – they were fantastic. We set kites and did what we usually do, but we sailed a good conservative race. The boat is going really well; I’m very happy with it. Credit to the other guys – Stormaway and Philosophers (Peter Sorensen) – they kept us honest. We are pleasantly surprised with how well we did, but we worked hard to do it.

“I have to finish by thanking the starter’s boat for Course H, They were fantastic, the communication was very good, we knew what was happening all the time,” Psaltis said.

The Adams 10 class slugged it out both days over six races. It seems winner, Mitchell Miller, named his ‘Rock Solid’ with some foresight. He and the crew, representing the host club, won four out of six races to defeat Kicknchase Rob Clarke by five points.

And although he was disappointed with the cancellation of racing today, ‘Dr Darryl’ Hodgkinson was thrilled to win the Super 12 series with the Carkeek 40, Victoire, purchased six months ago to supersede his 2013 Sydney Hobart winner of the same name.

Up against the likes of MC8’s, a Farr 400 and a Rob Shaw 11 Metre, Victoire won two from three races to beat second placed Lightspeed, the MC8 owned by Stephen Barlow.

“It was a good strikeout at this regatta against some tough competition,” Hodgkinson said. “We enjoyed it – the Super 12 is a great concept – all these different designs made for racing inshore. You go upwind and downwind very quickly in this class and we’re looking forward to more of the same,” he said.

Winners will be recognised at the official prizegiving cocktail party to be held at Middle Harbour Yacht Club tomorrow (Monday) evening.