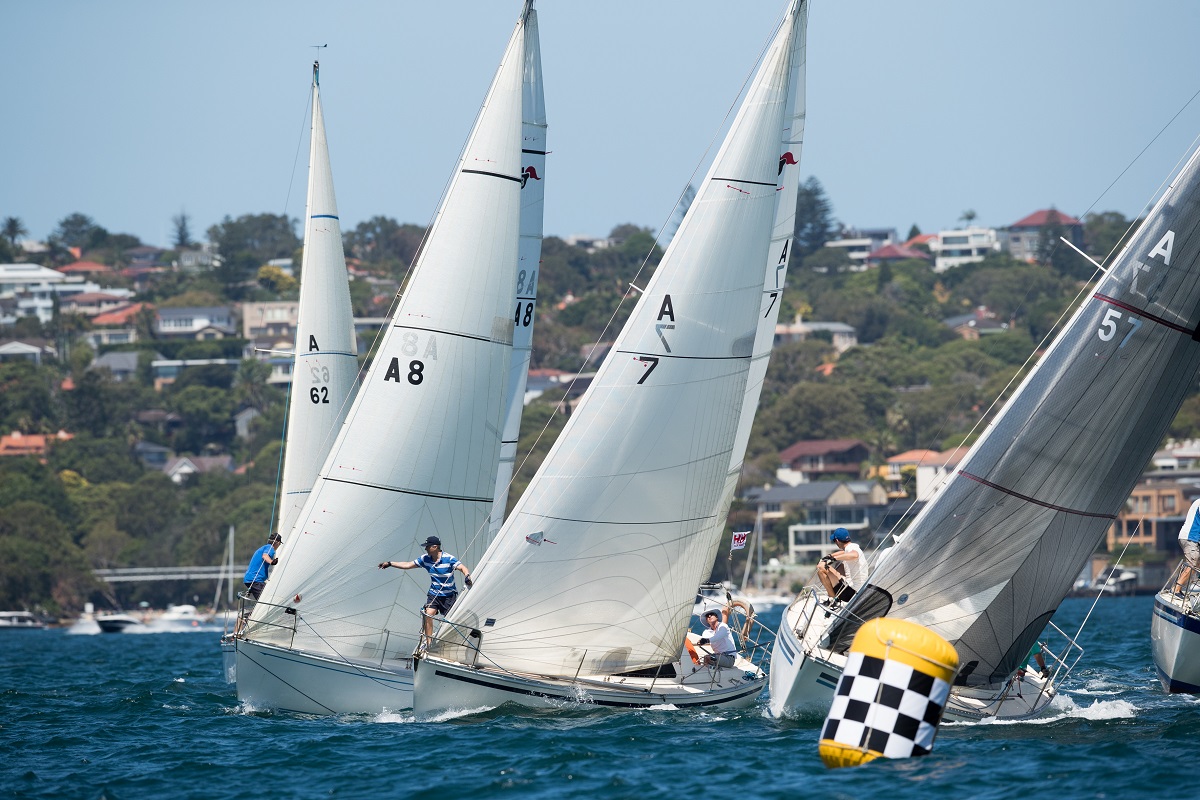 You would be hard put to find a more beautiful day on Sydney Harbour, although most competitors in Middle Harbour Yacht Club’s Sydney Harbour Regatta would no doubt say the breeze was a bit light on early, but the nor’ easter built and the multitude of sailors across the many classes on various courses enjoyed every minute.

By mid-afternoon the sea breeze was on the incline, 11 knots reported at midday and by 3pm 17-20 knots hit the wind dials on board the 190 plus boats taking part in NSW’s largest keelboat regatta.

Hamish Jarrett and his Miss Pibb crew are leading the charge for the Yngling NSW Championship at this event and could not have been more pleased with their day. “What a beautiful day on the Harbour,” he said, “it was a bit choppy with all the boats in the regatta, but the building nor’ easter turned into the perfect breeze – 18-19 knots.

“The racing was close. In the second race, the whole fleet was within a couple of minutes on the windward/leeward track. We won two and Evie (the defending champion) won one, so they are in second place right now – Ruth sailed the boat very well last year.

”Last year everything that could go wrong did for us, but this year, we have it all out of the way,” Jarrett finished.

Evie is triple Olympian Karen Gojnich’s boat which Ruth McCance skippered to win the Championship last year. This time, Gojnich is back on the helm with McCance crewing.

The Sydney 38s are also holding their NSW Championship and Greg Croak from Lake Macquarie had sailed Challenge into the lead after winning Races 1 and 3. There is only a one point buffer between them and David Hudson’s Conspiracy which took out Race 2 and nabbed a pair of second places.

Fairly new to the class, Croak was thrilled with their opening day on the offshore course. “No swell, very flat. The first race was around 9 knots and the breeze slowly built to 15-16 knots – near perfect,” he said.

“I’ve never been in a closer race than Race 3 with Conspiracy today – we wouldn’t have beat them by more than a metre – the lead changed between us all race. And the race we came second in, they won.

“We were comfortable that we’d sail well in flat water, but we’ve had little experience offshore, so if there had been swell we might have been in trouble, but yes, I’m surprised we’re at the top of the leaderboard. The pressure will be on tomorrow, because we’re expecting more breeze and swell,” he ended.

The PHS spinnaker divisions always create the most colour on the Harbour and today was no exception, with a trio of large divisions. Lee Dorrington sailed the Davidson 52, Prime Example, to a Division 1 win in Race 1 from Ray Parrott’s popular Miss Minx.

“Fantastic racing – beautiful conditions,” Dorrington commented. “It was very close racing in the first one, shame we missed the start of the second race by four minutes while we adjusted our settings. Oh well, helps the handicap for tomorrow,” said Dorrington, excusing himself to go back to the fun on the beach at Middle Harbour Yacht Club.

Not unexpectedly, even though this is his first outing with the recently purchased TP52 named Hooligan (all his boats are so named), Marcus Blackmore is leading Open Class Division 1 with three clear and neat wins in IRC this afternoon.

The rest did their best, but there was no stopping the irrepressible Blackmore, local yachtsman Bob Cox coming closest with a pair of second places with his DK46, Nine Dragons, but a drop to fourth in Race 3 means he is five points off the lead.

In Division 2, the end result was almost as clear-cut in a battle between three Sydney 36s. Ever-competitive Ed Psaltis sailed Midnight Rambler to three wins, although the third one he shared with Jack Stening/Colin Gunn’s Stormaway when the two finished with the same corrected time. A fifth in the opening race leaves Stormaway five points off the pace, with Matthew Hanning’s Supernova just half a point behind. Tomorrow will be a doozy.

Andrew York has come out on top of the pile in the Sports Boat division with three straight wins aboard his Reo 7, REO Speedwagon. York’s nearest rivals were the Tyler Ratcliff steered Viper 40, Heat, and Kevin Nixon’s Melges 24, Accru.

‘Yorky’, who was enjoying the festivities with his crew back at Middle Harbour Yacht Club, was succinct: “Very pleasant, a bit of a nor’ easter. A few holes in the breeze, especially under the lee of North Head, made it tricky and we had to dodge a few yachts. But it was a lot of fun. We had a bit of close racing with Kev Nixon, but we’re quicker off the wind, but they made up uphill.”

York, an acknowledged speed freak, added: “A southerly of 20 plus knots is expected tomorrow, and we look forward to that…”

For full results in all classes and divisions, please go to: www.shr.mhyc.com.au