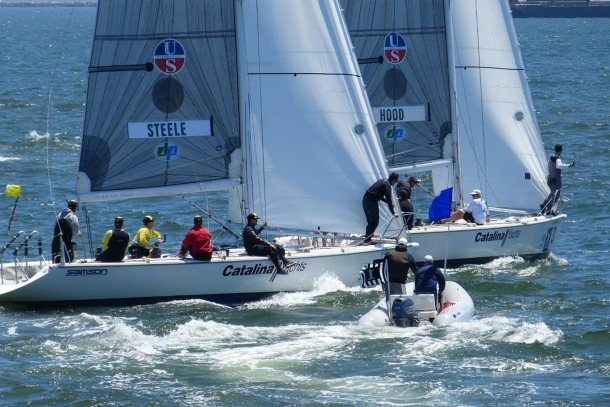 Steele lifted the Ficker Cup trophy following a nearly flawless regatta, surrendering only two races over the course of three days; and winning a spot in next week’s Congressional Cup regatta.

And while all eyes now turn now toward next week’s big event, the honor and prestige of the Ficker Cup itself cannot go unnoticed. This respected Grade Two regatta was established by Long Beach Yacht Club in 1980 to honor Bill Ficker, winning skipper of the 1970 America’s Cup, and world class Star boat champion. Etched on the trophy are the names of sailing greats like John Kostecki, Scott Dickson and Sally Barkow; plus Terry Hutchinson and Simone Ferrarese – both of whom went on to win the Congressional Cup in subsequent years.

Steele had been hopeful for a spot on the 2015/16 World Match Racing Tour – but when denied a card, he said he wanted to “prove a point” and come to the party anyway. The much-coveted WMRT card guarantees the eight chosen competitors a place at each event on the World Championship circuit – including Congressional Cup, now the season opener for WMRT.