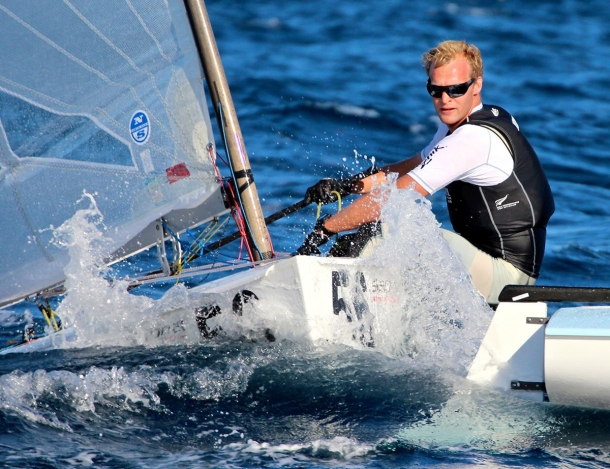 Josh Junior (NZL) has got off to a perfect start at the Finn European Championships in Split, Croatia after two race wins on the opening day. Egor Terpigorev (RUS) is in second while Arkadiy Kistanov (RUS) is third, as well as being the leading junior.

As expected the day started windless and hot, so an early postponement was hoisted as the fleet waited for the sea breeze. When it did arrive, it was later and weaker than predicted, though plenty strong enough to run two great races, with wind from 10-14 knots through the day.

Race 1 almost belonged to Arkadiy Kistanov (RUS). He led at every mark, and only lost the race shortly before the finish. It took three attempts to get the fleet away in the shifty wind, and when they finally got off the line cleanly, the left was clearly the favourite. Kistanov rounded the top mark with a sizable lead from Egor Terpigorev (RUS) and Josh Junior (NZL). Kistanov was setting the pace and he looked to be in control as he held his lead at the second windward mark. However, Junior had other ideas and took the lead towards the end of the final downwind to be the distinctly non-European winner of the first race of the 2015 Finn European Championships.

Race 2 took even longer to get away with the pin end being very popular as the breeze continually shifted left. The start was postponed in the final moments several times as the pin was dropped back slightly to meet the new wind, and after another two attempts the race was underway with six boats pulled out under the U flag. Unfortunately for Martin Robitaille (CAN) it was his second of the day.

Terpigorev continued his good form to lead round the top from Junior, but Junior was soon in the lead and extended all the way round the course for a huge race win. Terpigorev maintained second place through the gate and just held off a strong challenge from local favourite Ivan Kljakovic Gaspic (CRO) on the final downwind, with a photo finish to decide between them.

Kljakovic Gaspic, who placed 26th in the first race, said, “It was a tough call on the first race today. I was sure about the left hand side, but then I got some input from one of the local coaches, and it created a suspicion in my mind, and unfortunately I went right. I realised soon after the start that it was the wrong call but I couldn't do anything about it by then. I tried to recover but it was impossible as the fleet on the left hand side was just lifting into pressure. Then in the second race, I just kept calm and got on with the work. I had a decent start, and I had to fight until the end, for a very tight finish with the Russian.”

On the conditions, “It was strange today. I was hoping for a little bit more breeze, and this big lefty was quite a surprise. It normally happens but not that radical. I guess it's still the beginning of the season and the sea breeze is not so steady yet, so still quite flukey.”

Kistanov followed his second place with a 10th to sit in third place overnight. On race 1 he said, “I thought the left would be better and I had a great start. So good that I thought I might have been over, but it was OK. Then it was easy. I just went to the corner and tacked. It was nice. I just had to control the second placed boat. The second downwind was a bit tricky. I went too far to the left, but I should have stayed in front of Josh on the right so I could get the gusts as well. But he had better position, he got a gust and passed me.”

On the great performance of the Russians today, he said, “Over the winter we have been training in Russia, and then in Miami and Palma, but this is the first time I have been really fast. I am using my old mast again, and it seems to go much better.”

Second overall, Terpigorev added, “For me today was a great day. First of all, today I was lucky. I had very good speed, and it was a very good wind for me. I like the medium conditions and I think I am stronger on the downwind when we have free pumping. I am also not so bad on the upwind. Before I had upwind speed problems, but now it is OK and I am much happier with that.”

“I am surprised to be doing so well, but I hope the next races will be the same and I will stay lucky.”

Regatta leader Junior was also surprised to be doing so well. “Very good day, very happy. I haven't sailed like this in a long time. To win two races in a row is fantastic, especially with such good sailors around. So I am very pleased and surprised.”

On the first race, “I went left on the first beat because of the bias on the line. I think there was about 10 degrees bias towards the pin, so I took the bias and it was looking pretty good, so I kept on going for a while and when I tacked back we were ahead. On the second beat the Russian kept tacking on me. He was sailing really well. He had quite a big lead at the top mark, but I slowly clawed him in and we had a really good battle going into the finish, but just passed him 100 metres from the line.”

In the second race, “I started in the middle of the pin end and got a good lane, and then went all the way left and was second at the top and then I was really fast downwind and took a huge lead by the bottom mark.”

“I always knew I could win races, but to get two in one day is pretty good for me. I am going pretty fast and going the right way.

And on the next day, “Tomorrow's another day. You don't have days like today every day so I have to start again and keep going.”

Kistanov is also leading the juniors, with all the top three inside the top 10 overall. Defending champion Jake Lilley (AUS) in sixth overall after an 11, 7 while last year's Silver Cup bronze medalist, Nenad Bugarin (CRO) is in third after a 4, 23, and also the top Croatian.

Two more races are scheduled for Wednesday, with the same conditions expected. The opening series of 10 races concludes on Saturday, before the medal race and the final race for the rest on Sunday.