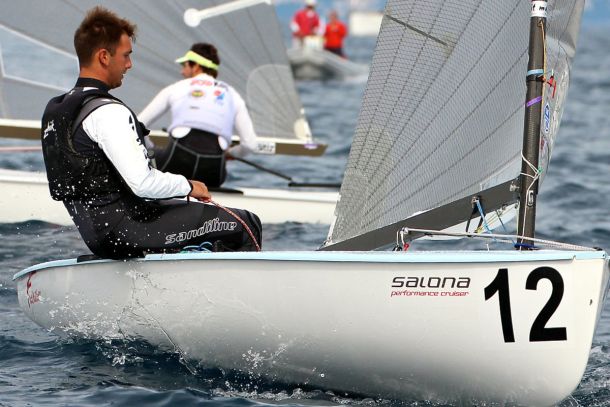 Arkadiy Kistanov (RUS) has taken the lead on the second day at the Finn European Championship in Split, Croatia, after only one late race was sailed in light winds. Andrew Murdoch (NZL) took the race win from Ivan Kljakovic Gaspic (CRO) and Ioannis Mitakis (GRE), who moves up to second overall, with Ed Wright (GBR) up to third overall.

The scheduled start time had already been put back to 13.00 with the forecast showing similar conditions to Tuesday, but a postponement followed at 11.00 with the race area remaining windless. The AP was dropped around 13.30 for a 15.00 start, however the wind was shifting 70 degrees so a further wait afloat ensued until the wind finally steadied around 16.00 allowing one race to get away.

After the left hand corner was favoured yesterday, some tried that gambit again, and lost. Some also tried the right, and lost. The leaders emerged from the middle playing the pressure bands. First round the top was James Hadden (GBR) from Andrew Murdoch (NZL), Ed Wright (GBR), Alejandro Foglia (URU) and Nenad Bugarin (CRO).

Murdoch sailed into the lead on the run, while Wright got swallowed whole by a hole and dropped to tenth. Hadden was still second round the gate, but pressure on the right on the second, shortened, beat allowed some new faces to claw their way back. Murdoch still led but Ivan Kljakovic Gaspic (CRO) and Ioannis Mitakis (GRE) came down the run in second and third for a close finish behind Murdoch. Arkadiy Kistanov (RUS) crossed in fifth to take the overall lead, displacing Josh Junior (NZL) who had won both races on Tuesday, and dropped to fifth overall after placing 28th today.

Murdoch's race win means all three races so far have been won by Kiwis. “There's always some good rivalry between team mates so it was good to come back and respond with a good race today. There's still a long way to go though. I entered here pretty much at the last minute and I am still getting over the jet lag.”

“I was sailing in pressure for pretty much the whole first beat. Looking at the race course before the start it wasn't super clear what to do and after the left was so favoured yesterday it was tricky knowing how far to go. I started hitting left from mid-line and I was one of the first ones to tack out. But I was checking over my shoulder for the guys on the left.”

“On the downwind, there were veins of pressure and I gybed away from Ed and he lost heaps. It was brutal. There was a lot of traffic going into the gate and because the breeze was soft it was pretty tricky getting out of there. I went round the right hand gate but there was a general turn to the right on the second beat, and also pressure wise, so the boats on the right came into it a bit more. I kept the same distance on the next boat, but it was a different boat.”

Kljakovic Gaspic has moved up to sixth overall. “It was a tricky day, quite patchy and a not very steady breeze. On the first upwind I was fine out of the start and then I got into a big lull in the middle of the course and got overtaken by half a dozen boats, and it didn't look so nice. But on the first downwind I stayed calm and the rest of the race I knew I had to fight until the end and got back to second pace, so it ended quite good.”

“I've had top three at the first mark but have never led at a big event. After yesterday it was kind of needed really. I was pretty relaxed and I was just enjoying myself. Looking back and seeing everyone else behind makes it a lot easier.”

Second overall, Mitakis, said “Today the weather was really tricky. It was hard for the race committee to set the course but finally we had a pretty good race. I passed the first mark in the top 10 and found a good way downwind to pass the gate top five and then moved into the top three. It was a pretty good day for me.”

“Today was more about finding the pressure and playing with the current. There's a lot of current out there, but I sailed very well today. My speed was OK, but I have done some good preparation in the course area.”

The new leader, Kistanov, was somewhat surprised to find he was leading the 70 boat fleet. “Before the start I wasn't sure which sure which side was better and finally it was pretty similar. I started in the middle of the line and just went with the shifts and then I could cover the fleet. Downwind I was happy with the way it went. It is a surprise to be leading now. I hoped I would make good races and it would be like this but I didn't really think it would happen.”

Kistanov is now leading both the seniors and the juniors while a seventh from Nenad Bugarin (CRO) moves him up to second junior and seventh overall. A 22nd from defending junior champion Jake Lilley (AUS) drops him to ninth overall.

Three more races are scheduled for Thursday from 12.00, with the some new conditions expected – wind from the south-east. The opening series of 10 races concludes on Saturday, before the medal race and the final race for the rest on Sunday.

First two races of Day Two and an interview with Josh Junior: