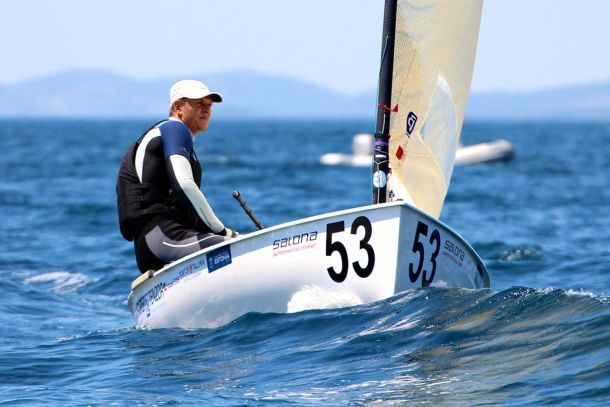 Once again only one race was sailed at the Finn European Championship in Split, Croatia. While Deniss Karpak (EST) led at every mark to win the race, Arkadiy Kistanov (RUS) extended his lead at the top to 11 points. Josh Junior (NZL) moved back up to second while Ioannis Mitakis (GRE) drops one to third.

After a short postponement race 4 got away under black flag following one general recall. Like yesterday the corners didn't pay again with race winner Deniss Karpak (EST) leading round the top mark, after playing the middle, with a narrow lead over Michele Paoletti (ITA) and Ioannis Mitakis (GRE). Karpak extended on the first downwind to hold a lead of more than a minute at the gate as the wind became lighter. Ondra Teply (CZE) rounded second from Oliver Tweddell (AUS).

Not much changed on the second upwind, but then on the final downwind, pressure from behind and the right allowed a few boats to make up places. Karpak almost lost his lead, on the wrong side of the course. However, he just held on to win from a fast approaching Zsombor Berecz (HUN) after some last minute tactics to cross in front of the fleet. Teply finished in third. Josh Junior (NZL) made up a few places on the final approach to climb to seventh and move up to second overall, while a 14th from Mitakis was just enough to stay in the top three.

After the finish the wind all but died and just over an hour later the fleet was sent home for the day. With four races sailed, the championship is now valid, but one more is needed before a medal race can be sailed. Kistanov has maintained his overall lead and extended it to 11 points. He said, “It was a tight race for me. I had a nice start. I went the wrong way on the first upwind, going too much to the left, but after that I made a good comeback to finish eighth.”

Third overall Mitakis, said, “I managed to find a good way upwind to round in the top 3, then I had a penalty on the first downwind, but I got back to seventh on the second upwind. On the last downwind I lost about 10 places, but it was OK for me as it was a lot worse for some guys. There were a lot of up and downs. Everyone thought the wind was going to turn right, but in the end the puff was from the left so some guys got past.”

After winning both races on the first day, Junior is back up to second overall. “I had a bit of a lucky race today. We had 7-8 knots at the start and a pretty square line. I got away to a good start and then it was really tricky up the first beat with the middle right paying, which is where the leaders came from. On the downwind I chipped away, and then on the second upwind, the wind went really funky, quite light and the pressure came out of the left. I ended up really deep and had to catch up and got back to about 15th at the top mark. Then there was an opportunity right before the finish when the front guys just dropped into no pressure so I made a bold move to try and sail round the outside. I went hard right looking downwind and managed to get round six or seven of them to cross in seventh, so I am happy with that. I came away with a good race.”

“The Russian junior is sailing really well so far. It's definitely going to be windy tomorrow. Heavy weather sails, a bit of a hike off. Bit of a change.”

Anders Petersen (NOR) is sailing his first full season in the senior fleet after winning the Junior World Championship last year. He will keep the title for just a few more weeks before the 2015 Finn Silver Cup takes place in Valencia at the end of June. His main opposition from last year, and one of the favourites this year is Kistanov.

“I wish I was still a year younger so I could do the Juniors again. In most races we sail with the seniors so it's not that much difference, but at the youth championship everything is easier and there is more room at the start. In the seniors there are many more guys pushing. I think this year's Silver Cup will be pretty tough though, especially with Arkadiy in first place here.”

“I had a very good race today. The start was OK, but then I got rolled by NZL 16. I attacked my way into the course and I was lucky on the first beat to catch some wind and rounded the top in tenth. I had a good downwind and on the second beat I was far out to the left and got up to ninth, and then I managed to go round some guys on the downwind to finish sixth.”

Race winner Karpak mused on his race win after a disastrous race on Wednesday. “Yesterday was a pity. I was ninth at the first mark, then touched the mark, got a penalty, did my turns, but they were too late, so hopefully I got all the bad things in one race.” He later retired from the race.

“Today, I had good speed and the first upwind was great. The middle was the way to go. There were too many shifts to go to one side. I wasn't in first place 200 metres from the mark and then a few tacks later I was leading.”

“On the downwind I went left and got away to a lead of more than one minute at the gate. But I almost lost it. I finished just metres ahead of the Hungarian. There was no wind at the finish, and everyone came back at me with more pressure. At one point I gybed and crossed at almost 90 degrees to the course to catch the Hungarian. If I had continued to go straight to the finish I would have lost the race. Then the wind died after we had finished.”

“Tomorrow will be a hard day as the forecast is windy.” Three more races are now scheduled for Friday from 11.00, with the some strong winds forecast to be arriving overnight. After one more race the discard comes into effect, which should change the leader board somewhat, though perhaps not as much as three windy races. It should be a big day for everyone if the forecast is correct.

Kistanov still leads both the Seniors and the Juniors and has not only extended his lead on the seniors but also the juniors, after both Jake Lilley (AUS) and Nenad Bugarin (CRO) had results in the 20s. In the Seniors, only 10 points separates the next seven places, so Friday will be a crucial day for some.

The opening series of 10 races concludes on Saturday, before the medal race and the final race for the rest takes place on Sunday.