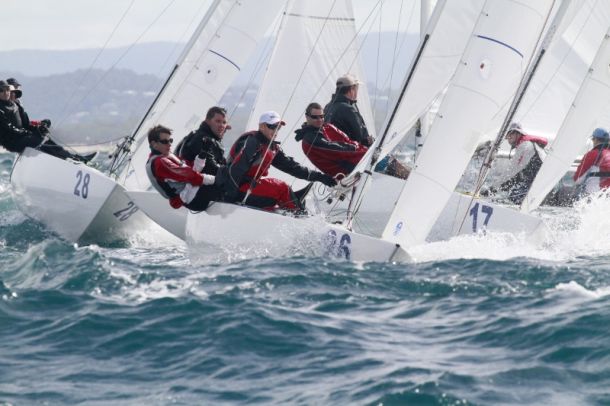 The flow of entries into this year’s 19th Marinepool Etchells Australasian Winter Championship, to be held on the weekend of June 4 to 7, has Mooloolaba Yacht Club’s organising committee happily planning for a sell-out event.

Organising committee chair and early entrant Trevor Martin said that with nearly two weeks to go to close of entries this year’s fleet is looking like another year of quality competition with an outstanding final entry number.  “I am still working towards 45 to 50 boats with many of the regulars still not entered yet

“It’s a testament to the strength of the class that there is again a strong line-up for the Australasians.  Mind you, it could also be the venue since the guys are guaranteed great and often testing racing conditions off Mooloolaba. Then back on shore they are spoilt for social distractions,” Martin said.

At the start of the week entries were at 31 ahead of close off on Friday May 29th. “We are still expecting entries from GT, Tom King with a charter boat, two more from Hong Kong, Jake Gunther, Noel Drennan, Cameron Miles, Noel Paterson, just to name a few. If they read their names in this story, maybe that will get them moving sooner.  John (Bertrand) can’t make it this year as his job as head of Swimming Australia is taking him elsewhere, however he says he is still very keen to add the Australasians to his trophy list; not saying he hasn’t tried very hard in the past to do this,” he added.

In among the fleet are entries from Hong Kong, West Australia, South Australia, Victoria, New South Wales and Queensland.

The youngest helm looks like being Brisbane Fleet’s Josh Willis. At 24 the young sailor is already an old crewing hand in the class having raced in the National Championships in Adelaide and then the World Championships in Melbourne in 2009 as well as competed in several Australasians. This will be his first time on the helm at a major regatta.

“It was actually Dad’s choice. He said he would stay in the middle and I could move back to the tiller. I've always wanted to steer, but never had the opportunity until Dad purchased Joe,” Willis said.

Two strong women helms in Pittwater Fleet’s Jill Connell, who finished third in the recent Brisbane Fleet Championship, and Sydney Fleet’s Jeanne-Claude Strong, who won this year’s Milsons Silver Goblets in January, will also be in the mix.

“After the recent Brisbane titles where he finished second overall I think Chris Hampton with his team of Ben (Morrison-Jack) and Barney (Ian Walker) are going to be the ones to finally step up the podium. I reckon they will paint a target on the back of (Mathew) Chewie and peg him back early in the event. They may even decide to take me out before the official regatta when we race in the Australasians Rum Runner knock-out event on the Thursday afternoon before the regatta starts as Ben was one of the instigators of that challenge,” Martin tipped.

The Notice of Race and online entry to the Marinepool Etchells Australasian Winter Championship, being conducted by Mooloolaba Yacht Club from June 4 to 7, are available from www.mooloolabaetchells.com.