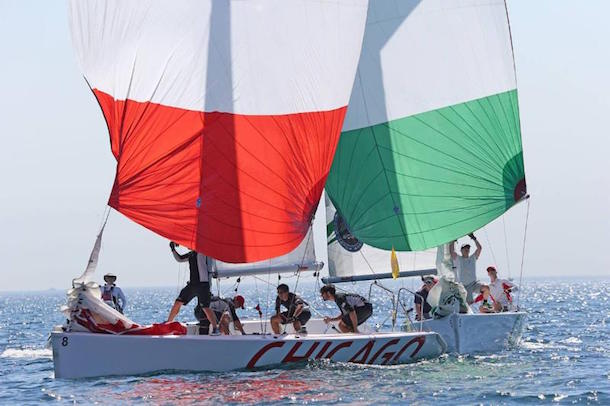 A southerly breeze that started light and shifty built to a perfect 10 knots today, making for perfect match racing conditions and close results at the Chicago Match Cup Grand Slam. Top-ranked Chris Steele and his 36 Below Racing team from New Zealand has taken the early lead in the standings on a 5-1 record.

The Kiwi team cannot rest on these results, however, as right behind them are no less than 5 teams on 4 wins each: David Storrs, sailing with last year's champion, World No.2-ranked Taylor Canfield and his Team US One, is runner-up now on a record of 4-1. The team sailed well today, with good speed in all conditions and steering clear of penalty problems despite the generally aggressive nature of the pre-start action in most of today's matches.

There is a four-way tie for 3rd place in the standings, with the young Swedish talent Patrik Sturesson earning an impressive 4-2 record for his debut appearance at CMRC, as did Matt Jerwood from Australia, fellow Australian Sam Gilmour, and Chris Poole from New York.

In contrast, CMRC regulars Don Wilson and Steve Lowery were off to a mediocre start, tied on scores of 2-3, and Nathan Hollerbach struggling on 0-4. The winner of the CMRC Summer Invitational A-B in July, Nevin Snow, was also struggling on a record of 0-5, an indication of the tough field at this event. Both will have to have strong results tomorrow to climb up to the top eight who go through to the Quarter Finals.

Racing resumes tomorrow at 09:00 with the completion of the Round Robin and the start of the Quarter Finals, with a promising forecast of a solid southerly breeze all day.

Preliminary Results after Day One: