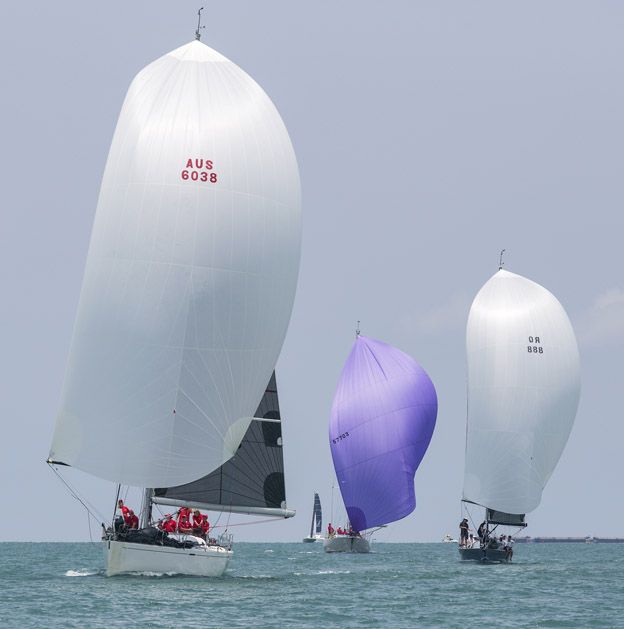 PATTAYA, Thailand – Yesterday's storm didn't reappear today and steady winds of 10-12 knots delivered some close racing across the fleet. Today was the first day for the keelboat and multihull classes and with the series being just four days in total they wasted no time in getting started.

Denis Thompson and his race management team got two races in for the keelboats and multihulls, with three windward/leewards for the one-design Platus.

Enjoying his first competitive race on his recently acquired TP52 'THA72', Kevin Whitcraft and his crew made up for a slow start to reel in Ray Roberts' TP52 Millenium Racing (AUS) on the first upwind leg, sail straight past and extend their lead to the finish taking both Line Honours and the win on corrected time in Race 1. Things, however, didn't go to plan in Race 2 as THA72 pulled out soon after the start with a backstay problem leaving Millenium Racing to trot around the course to their first win and the top of the leaderboard.

The owner quartet of Sorensen, Ketelbey, Tilden and Brown on Fujin (AUS) steered a clean race in IRC 2 to score first blood with a win in Race 1 by less than one minute on corrected time from Roland Dane's Jessandra II (THA). The tables were turned in Race 2 with Jessandra II getting the better of Fujin and sharing the spoils at the top of the standings at the end of their Day 1.

The Thai/Swedish crew on Amanda, lead by Lennart Fahlgren, scored two bullets today and stamped their authority on IRC 3 while in the Cruising class it was an all Thai affair at the top with Pote Suyasintu's Le Vent making it two from two while Nukool Pothi's Seim Samathi 1's 3,2 scoreline was enough to hold onto second spot overall.

Scott Duncanson and his Kingdom Property team are looking to make it three Platu Coronation Cups in a row after winning in 2014 and 2015, but a fourth in the first race today wasn't the start they were looking for. Despite leading round the course, Rolf Heemskerk lost out by just two seconds on the line to fast finisher Chris Way (AUS) and his crew on Easy Tiger IV. Duncanson bounced back and made it two from two in the final races of the day and shares top spot overall with Chris Way.

With just two entries in the Ocean Multihulls class, Kirati Assakul's Sonic and Radab Kanjanavanit's Cedar Swan, were trading places. The first win went to Sonic while in Race 2 Cedar Swan were victorious by a mere six second margin on corrected time.

It was a busy and tiring day for the windsurfers competing in the RS:One Asian Championship. After just a single race completed on the first day, race management finished five races today to get the series back on schedule. In the Men's division, it was consistency from I Nyoman Suartana (INA) with three wins today that sees him four points clear of Leung Pui Hei (HKG) with Geylord Coveta (PHI) in third. Thai top placer at the end of Day 2 is Natthaphong Phonoppharat who sits in fifth.

Leading the Women's division having dropped just two points from six races, is Thai star Siripon Kaewduangngam who together with Sarocha Prumprai and Krongkaew Sakulfaeng make it a Thai top three.

On the dinghy courses it was three back-to-back races for all bringing the series standings to six races so far with one day to go. Due to the large size of Class 9 (Single Monohull Dinghy Class) it has been split into 9a (Laser Standard and laser Radial) and 9b (Laser 4.7).

Two yellow flags in the first race for Keerati Bualong saw him score a DNF and despite a 1,2 scoreline in the final two races Keerati dropped to fifth overall. One race tomorrow, however, will mean a discard for all and likely see Keerati shoot back up the standings. In the meantime, at the end of Day 2 Asri Bin Azman (MAS) leads from Apiwat Sringham (THA).

There was a change at the top today in Class 10 with the nine 420's enjoying some tight racing. Leaders at the end of Day 1, Navee Thamsoontorn and Kittiporn Kumjorn (THA), slipped down to second overall today behind new class leaders Tengku Mohd Muslim an Hassan T and Amikul Mukminin (MAS), with Sutida Poonpat and Gunyaporn Bueangbon (THA) in third.

Following the first day of racing in the Optimist class, the fleet has been split into A and B, and after three races today it is Royal Hong Kong Yacht Club sailor Duncan Gregor, who leads the standings one point ahead of Muhammad Izzuddin (MAS) with Thai girl Chanokchon Wangsuk in third.