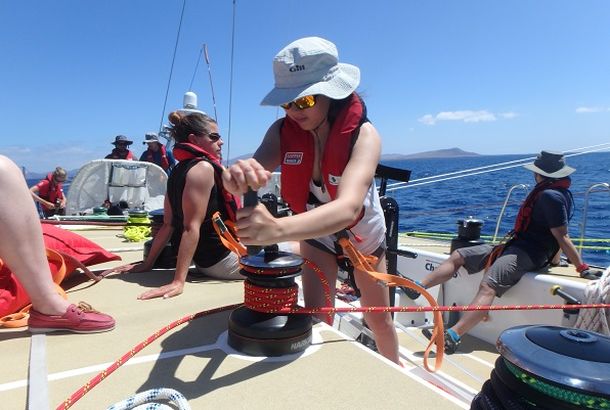 On the winch on board Qingdao. Photo Clipper Ventures.

All eyes are on the skies as the teams monitor the clouds for squall activity, gusts, strong winds and thunder and lightning in the Inter Tropical Convergence Zone (ITCZ).

Meticulous trimming and helming is key as conditions become more unsteady and tropical as the crews make their way south towards the Equator.

GREAT Britain, in second, declared its intention to start to motor-sail at 1023 UTC in the Doldrums Corridor for a period of 60 hours or until it reaches 6 degrees North or, whichever occurs first. Race leader LMAX Exchange is 32 hours into its motor-sail phase as it gets closer to the Equator. For more information on the Doldrums Corridor, click here.

Garmin and Qingdao have been duelling for large parts of the race to Rio. The yachts’ courses have converged once again enabling them to resume the epic battle near the Cape Verde Islands after they had gone separate ways after the Canaries. Igor Gotlibovych, Skipper of fifth-placed Qingdao, describes the last 24 hours:

“While heading south towards the island of Santiago, we spotted lightning and towering thunderstorm clouds ahead. Deciding that we will find more consistent conditions further west, we gybed and spent another day sailing in perfect Trade Winds.

“Garmin kept disappearing and re-appearing all day, at one point crossing merely a few boat lengths away. By evening, both yachts had settled for a southerly course towards the Doldrums Corridor, steering between bands of ominous clouds with an occasional lightning flash in the distance. So far, while the winds have been variable overnight, we have not seen more than a few drops of rain, but we are in an area known for sudden squalls with strong winds and torrential downpours, so we are ready to batten down the hatches any hour!”

Garmin Skipper Ashley Skett said that after nearly 3,000 nautical miles of ocean sailing and despite different tactics more recently, the teams crossed each other within two boat lengths, with Garmin giving the Qingdao crew a friendly wave as it just squeezed ahead to grab fourth place.

“Holding on to it is going to be hard work but the crew have worked amazingly hard over the last few days to make up some lost miles, they deserve it and I know that we are up to the task,” he added.