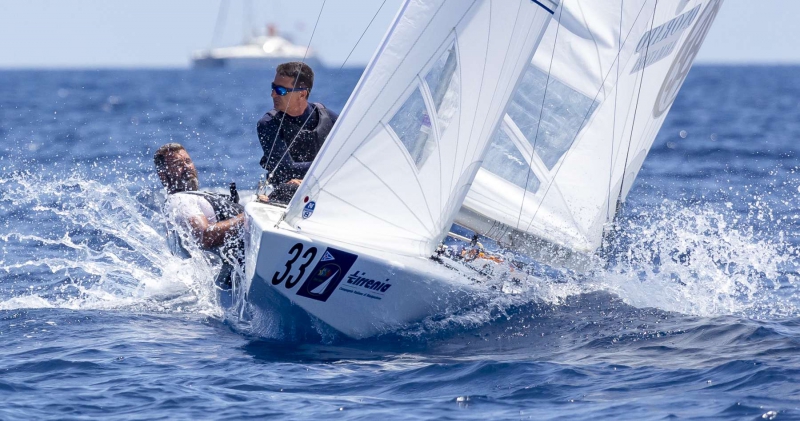 Porto Cervo, June 17th, 2019. The Star Class World Championship is off to a good start with today's race run as scheduled despite light breeze. The Championship, which has returned to Porto Cervo after thirty years, is organized by the YCCS in collaboration with the International Star Class Yacht Racing Association (ISCRYA) and the support of Main Partner Audi and Technical Partners Quantum Sails and Garmin Marine.

This morning at 12.00 sharp the 63 competing teams from 20 different nations were at the start, ready to race in the waters off Porto Cervo. Just as the Starting Procedures were getting underway a wind shift forced the Race Committee to hoist the AP flag and wait for the breeze to settle. After about an hour a northerly breeze from 7 to 9 knots kicked in and the Star fleet could begin their World Championship. The course was changed along the final leg when the breeze shifted to the northeast and dropped to 4/5 knots.

At the end of the day there are two Italian teams in the lead followed by a Spanish team. Enrico Chieffi, the Star Class World Champion in 1996, and his bowman Manlio Corsi captured the lead right from the start, rounding the first mark in first place and lengthening their lead right to the finish. The second placed team today is also Italian and sees Diego Negri – silver medallist at the 2016 Star European Championship – with Sergio Lambertenghi aboard. Thanks to a recovery along the last leg of today's race they finished ahead of the Spanish team with Roberto 'Chuny' Bermudez De Castro and Miguel Fernandez Castro aboard. Chuny is an oceanic sailor who has won the VOR and sailed for Spain in the Star Class at the 2004 Olympics in Athens.

At the end of the day's race skipper Enrico Chieffi said: “We couldn't have gotten this World Championship off to a better start, maybe we should quit while we're ahead and go home,” he joked. “It was a great race, very technical and hard, especially towards the end, but luckily the breeze held right to the finish. The last time I participated in a Star Class World Championship was in 1996 in Rio de Janeiro, Brazil, where I won it, I'm very happy to be here competing again. Who knows how the next few days will go.”

“I'm very proud to be back here racing again after 30 years,” said Hubert Merklebach, ISCYRA President. “I was here as a competitor in 1989 when the last Star Class World Championship was held in Porto Cervo and I'm happy to be back in my new role as President of this Class that I love so much in such a happy and enthusiastic moment. Today we managed to place in the top ten and I hope to keep sailing at this level. But above all I hope that all of the 63 teams that are competing here will have the time of their lives.”

Tomorrow, June 18th the first Warning Signal is scheduled for 12 noon. The forecast calls for westerly breeze at 7-10 knots.