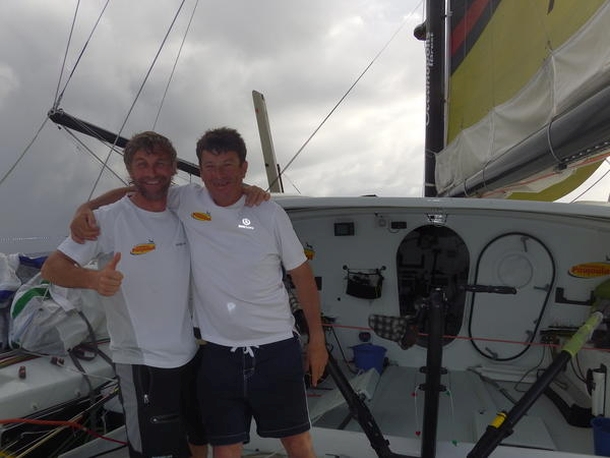 Stamm and Le Cam during the final days of the Barcelona World Race. Photo Race Media.

With less than 220 miles left, and at times today making just two to three knots towards the Barcelona World Race finish line, Bernard Stamm and Jean Le Cam were taking nothing at all for granted.

This Tuesday morning their song remains resolutely the same, once again pledging to remain in full race focus aboard Cheminées Poujoulat until they can finally hear the winning gun in front of Barcelona's iconic W-Hotel.

Their last few hours of racing will still be very challenging. At the Balearics and north they will have strong NE'ly winds, gusting to 30kts, with awkward seas. This is in sharp and sudden contrast to this morning's drifting conditions in the Mediterranean. The 'winners elect' have made just 126 miles in the 24 hours to 1400hrs UTC this afternoon and their ETA was sliding into Wednesday afternoon, but Swiss skipper Bernard Stamm revealed his steely determination to simply complete the job:

” I think those ashore see it differently from us. We don’t feel like we have arrived, it’s something that is still ahead of us. The race isn’t over. And we still have to keep going. We’re not likely to have any damage sailing at two knots, but there could still be some strong winds ahead. No wind at all makes it just as complicated, as you just have to try to keep moving.”
” We’re taking care of ourselves first. For the boat, we mustn’t think that it’s over yet. There is still some strong wind ahead. All the equipment could still get soaked. We’re not going to start putting things away as if it is over.”

Ahead of the finish Stamm revealed that their race has, at times, been a battle to keep going suffering numerous incidents causing damage to sails, their mast track, halyards and locks, confirming that they have completed much of the course with no wind information:

” We had a few major technical problems. We still have our mast, keel, rudders and there are no holes in the hull. We did have some nasty problems with the mast track, no wind info for half of the passage around the world, we lost an important sail at the start, and there were some other things too. We are still suffering from those problems with our hooks and halyards. To get the genoa up requires us to climb to the top of the mast. And it’s a sail that is useful in the Mediterranean. I don’t think we had a day without one problem or another. There were no structural problems and we managed more or less to keep going in spite of these difficulties. We were lucky to have transition zones with fairly decent seas even in the Pacific to be able to fix the track back in place and hoist the mainsail. It certainly wasn’t smooth sailing all the way.”

Stamm continues:
” I don’t know how many times I climbed the mast. During the first half of the raceI seemed to spend all my time up there. After that I had to go back up because of the mast track problem and for the wind instruments after the Doldrums. Things were a little quieter on that front by the time we got into the Pacific, but some things take ages to sort out.”

Comms Probs
In second place, Neutrogena have detailed the reasons for their non communication since March 5th. Skippers Guillermo Altadill and Jose Munoz report that a crash gybe on that date removed their stern mounted antennae. Their report to race direction and the fleet states that they have been unable to to use their Fleet Broadband or Iridium open port since that date.

Altadill explained: “In order to remain in the game we had to continue without being able to download weather or get the other boat’s positions. It is frustrating but there is no other option. Whilst we conserve energy we are focusing all our attention on sailing Neutrogena 100% efficiently. To communicate we are relying on our emergency Iridium to make ship to shore contact. All we can do is focus on sailing the boat fast with the conditions we have.”

They are racing just north of the Canary Islands still upwind heading in the NE'ly trade winds. Tw o of the fleet in the Atlantic are now temporarily in 'solo' mode following injuries. A fall for Anna Corbella, sustaining sprained knee ligaments, means that she is resting up now, leaving co-skipper Gerard Marín to do the majority of the physical work on GAES Centros Auditivos, just as Nandor Fa is still taking on the heavy work on Spirit of Hungary after Conrad Colman dislocated his shoulder a few days ago. Colman said today:

” During my watches I can still be useful by planning the navigation, easing sheets, controlling the pilot and now, after a couple of days of recovery, make a few hesitant turns on the pedestal with just my right arm. Normal use of the pedestal winch favours biomechanics in that you can be braced securely and balance the push of one arm against the pull of the other for maximum output. Now I can only grab it with one hand and try to whirl the handle as best I can.”

The battle for fourth and fifth continues as One Planet, One Ocean & Pharmaton and We Are Water emerge into the NE'ly trade winds. Aleix Gelabert and Didac Costa still lead We Are Water'sGarcia brothers by more than 80 miles.

The two pairs still in the southern hemisphere, Renault Captur are into the SE'ly trade winds and making better progress towards the Doldrums and the Equator, while Spirit of Hungary have a transition zone to negotiate with light winds.
With the spotlight on Barcelona tomorrow for the finish of Cheminées Poujoulat those duos still in the South Atlantic can be forgiven for feeling a little more detatched and remote from the finish line.