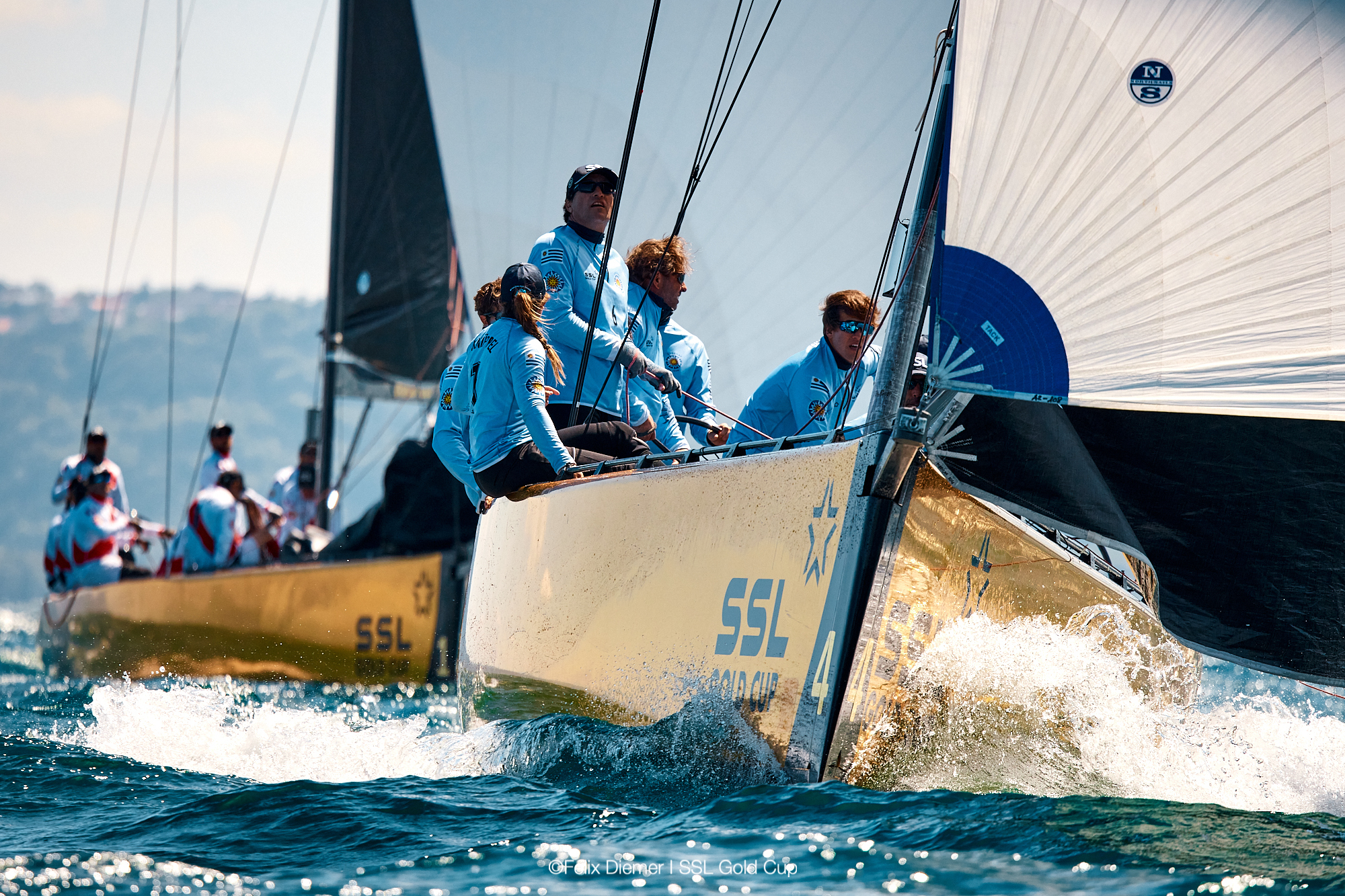 There were some close encounters

The ‘Finis Terrae Sailors’ of Chile led the fleet for the majority of the race but could not shake off the determined Uruguayans. La Celeste, led by captain Ricardo Fabini, made the decisive move at the turn into the final leg, and sailed downwind to glory.

SSL Team Peru were in contention early on but lost crucial ground when forced to tack by Uruguay close to Mark 1.

For Venezuela’s ‘Los Caciques’ it was a case of what might have been, holding 2nd place for more than half the race before conceding time to Pablo Lorca’s Finis Terrae Sailors in the third leg.

In the end, the chasing Paracas Warriors from Peru almost caught the Venezuelans, finishing just 7 seconds behind.

Coming to the top of the final leg, the race was firmly in the balance with all four teams still in the hunt for maximum points. But Pablo Lorca’s crew held their nerve to take maximum points, coming home with 15” to spare over hard-chasing Peru.

SSL Team Uruguay and Venezuela’s Los Caciques took turns trying to control each other in a busy third leg, but still trailed the leading pair at the final turn. Despite a final charge from La Celeste, they had left themselves too much to do.

After a full day of racing, SSL Team Uruguay and SSL Team Chile is in pole position to take the two available slots for the finals in Bahrain.

Stefano Peschiera’s SSL Team Peru will no doubt take heart from their performance in the last race and tomorrow may be their day to shine. Both they and group underdog SSL Team Venezuela know they are in a battle to stay in overall contention.

Dominque Knüppel, bow on Team Uruguay: “We had a great day of racing finishing with two wins and a third. Our speed is very good so far and so are our maneuvers. We feel confident in our team, but we know the coming days won’t be easy as we are in a very even group.”

Felipe Echenique, tactician, on Team Chile: “Conditions were absolutely amazing. Lake Neuchatel is such a great place for sailing. We had an incredible and solid day finishing with a pair of second places and a win.

“In Race 1, we were leading until the last upwind leg. We had problems with just one maneuver that made us lose our lead. The crew was amazing, except for that mistake, but I take responsibility for it.”

With only one race in Group 4 today, the crew on SSL Team Czech Republic once again brought their ‘A’ game. The imperious Czechs fought off SSL Team Portugal to secure their second win in the group and extend their lead over their European rivals.

The day started badly for Joao Rodrigues and his Portuguese ‘navigators’, docked one point in the overall standings for a late team declaration. Despite this setback, they started the race brightly and led at the halfway point.

The Portuguese looked in control until aggressive sailing by the Czechs in the third leg forced SSL Team Portugal over the layline and set up the victory for Ondrej Teply’s team.

SSL Team Turkiye sailed home in third place, always close to the top two but never quite able to bridge the gap.

Having won yesterday’s second race, SSL Team Bulgaria, captained by Yavor Kolev, won’t want to dwell too long on this one. Forced to the side at the start, they lost a lot of time and never recovered.

Looking ahead to tomorrow’s racing, the Czechs have established themselves as the team to beat. Behind, there is only two points separating second from fourth, meaning the battle for Bahrain is still wide open in Group 4.