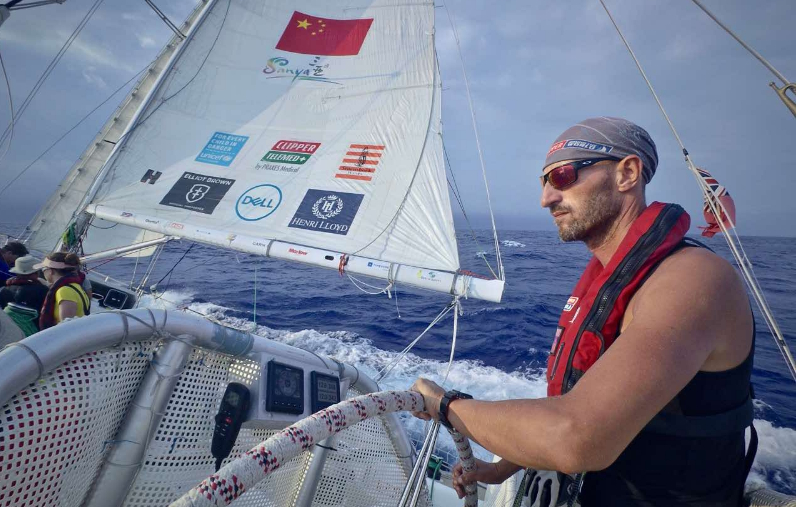 The Elliot Brown Ocean Sprint for Race 11: Nasdaq Race to New York is far from over, but already there have been some incredible duels between the Clipper Race teams.

Whilst the entire fleet is yet to complete the sprint, it currently looks as though Nasdaq and Garmin are battling for the maximum three bonus points on offer. Both made the most of the west-southwest winds off the US States of Georgia and South Carolina and had incredible runs over the last 24 hours. Garmin sliced 252 nautical miles (nm) off its distance to the finish line, whilst Nasdaq covered an impressive 246nm to take third place in the current standings.

And after not having too much success in past sprints, Nasdaq Skipper Rob Graham says: “Amazing – an Elliot Brown Ocean Sprint that actually felt like a sprint. No flopping around in wind holes, and no bashing to windward in the wrong direction. Just Nasdaq doing what a Clipper 70 does best – reaching along under spinnaker through a good strong breeze.

“We know that our competitors ahead and behind also sprinted very well, so the results will be close. But we're pleased with our own performance on board. As the wind strengthened and the sea state built, the whole crew worked together to switch from Code 2 (Mediumweight Spinnaker) to Code 3 (Heavyweight Spinnaker) via Yankee 1 in just 14 minutes. The Nasdaq crew James Cole, Kay Witte, and Loic Henuset drove it like they stole it, whilst we've set new standards of kite trimming.”

Confidence is also high aboard Garmin, with Skipper Gaetan Thomas commenting: “We had a good speed and we'll wait and see the verdict but I'm pretty sure it's gonna be a very close one. We were west of Nasdaq and on each position report our speed and course were quite similar.”

The performance of Nasdaq and Garmin during the Elliot Brown Ocean Sprint has not gone unnoticed by the rest of the Clipper Race fleet. HotelPlanner.com Skipper Conall Morrison says: “We have had almost perfect conditions for the Elliot Brown Ocean Sprint and are waiting to hear the results. Big shout out to Nasdaq and Garmin further to the east, the distances they have covered in the latest scheds are impressive and will be hard to beat.”

The bonus points for the three fastest teams in the Elliot Brown Ocean Sprint will be announced by the Clipper Race Office when the entire fleet has finished and crossed the northern gate.

The Elliot Brown Ocean Sprint hasn't been the only thing that has been keeping the teams busy, with the fleet also facing the first major squalls of Race 11. Sanya Serenity Coast Skipper Wendy Tuck reports: “The rain was incredible. It was so bad I needed goggles on in order to steer and see. Since then, we have had lightning all around us and the wind direction has been completely different from the forecasted wind.

“We had been tracking another lot of clouds via Mark 1 Eyeball and radar this morning. It looked like we had gone past it all when wind went from 14 knots to 35 in an instant.”

Whilst the top two – PSP Logistics and GREAT Britain – remains unchanged for a third straight day and third place is currently being hotly contested, the next 48 hours of the race will be quite tactical. Clipper Race Meteorologist Simon Rowell reports that until the next low takes over, winds will be patchy and unsteady. And with just days remaining in the 1,900nm race and Qingdao and Visit Seattle in Stealth Mode, there is still everything to play for.