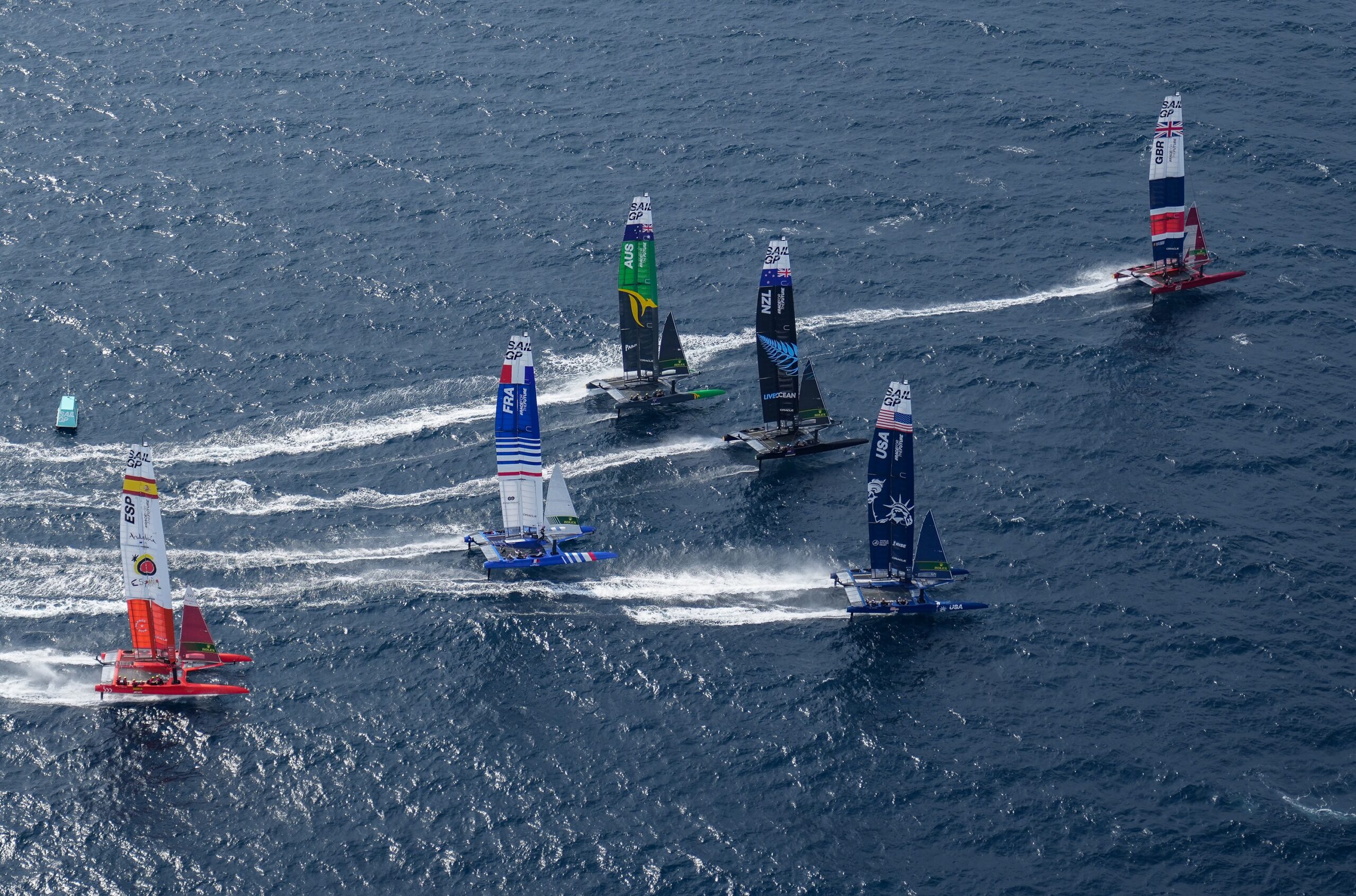 The spectator-lined seawall of Saint Tropez was matched by the dazzling array of superyachts surrounding the F50 racecourse for the opening day of the France Sail Grand Prix, where fair weather brought out large crowds for an adrenaline-fueled day of racing at the global championship’s fifth event of the season.

In light-winds – that saw the eight national teams reduced to three crew – Australian Jimmy Spithill and the U.S. team put in an impressive performance to claim two race victories.

The U.S. team finished the day at the top of the leaderboard, three points ahead of Peter Burling’s consistent New Zealand SailGP Team in second. Phil Robertson’s Spain SailGP Team rounded out the top three heading into Sunday a further point behind and tied on even points with Nathan Outteridge’s Japan team.

After an early onslaught of unfortunate spills, crashes and technical issues at the start of Season 2, the United States SailGP Team has seemingly pushed through the worst of times by taking a win in both the second and third race of the day.

Adding to its spectacular performance was the rapid return of the team’s injured wing trimmer, Paul Campbell-James. After a speedy, three-week recovery from a leg fracture – inflicted during an on-water maneuver at the recent Rockwool Denmark Sail Grand Prix – Campbell-James was back onboard, alongside Andrew Campbell.

Spithill said: “I was fairly pleased with the results today. The first one not so much, but the last two I thought CJ (Paul Campbell-James) and Andrew (Campbell) did a really good job. It was pretty incredible actually to see CJ running across the boat just weeks after snapping his fibula.

“We’ve had some changes to our current line-up. Rome Kirby is out for this event so Taylor Canfield has come in as our interim flight controller, but for the three-man position, we put Andrew Campbell in as tactician. Along with doing multiple roles, he did a great job today, especially for his first time.

“For us, now, it’s just one race at a time and if we can get through this event without damaging something, sinking or breaking another bone it will be fantastic!”

Heading into the final race day tomorrow, Spithill will be looking to solidify a spot for the U.S. in the podium final, with his eyes set on winning the team’s first event of the season.

Allaying doubts about the team’s competitive drive, the New Zealand team – with Burling in the driving seat – demonstrated the most consistent performance of the day with a fourth and two third place finishes.

Driving the Kiwis toward its first ever podium race on Sunday, Burling and his team were undeterred by the penalties received in the opening race, and put in a steady series across the remaining two races.

Burling said: “I wouldn’t say we had a consistent day; we gave ourselves plenty of opportunities but made a lot of mistakes as well. It would be much better to have more points on the scoreboard.

“We’ve got our strengths, but it would have been good to have the extra crew on board to make life a little bit easier. I think there’s a couple of boats that have an advantage with three up, definitely Jimmy (Spithill) and also Nathan (Outteridge).

“We are really excited by the challenges. We just haven’t had much time as a group, but we feel like we are doing a really good job of learning and improving.

“Even to be sailing three up today compared to the conditions we had in Denmark and how we sailed there, is already a stark improvement. We are really happy with that and we are just trying to keep on that steep learning curve.”

For the home team favorites it was a disappointing day and despite encouragement from the cheering crowds, Billy Besson’s French team struggled to put solid scores on the leaderboard and ended the day one off the bottom spot. However, the team remains positive and determined to delight the home fans in Saint-Tropez.

Besson said: “We are very happy to be here racing in Saint-Tropez. The SailGP racing is really close to the shore and we can hear the crowd which is really nice for us. I’m very proud to be here and see all the home support, and just hope we can make them proud tomorrow.”

Another team that surprisingly struggled in the light airs was Ben Ainslie’s British team. Despite coming out strongly to take the first win of the day, the British team couldn’t keep its form and finished the day in fifth.

Frustrated also was the overall season leader, Tom Slingsby’s Australia team. They were plagued with technical problems that meant spending most of the day without instruments.

“Right from the first fleet race we were faced with several issues. We had no software, daggerboards not going down and our entire system completely shutting down. We’d scramble to fix one issue between the races, only to find another issue pop up when we were racing.

Despite the technical issues, Slingsby and the team scored two sixth places. They are sitting seventh on the leaderboard.

Discussing Sunday’s racing, Slingsby said, “We need to try and minimise this loss, dust ourselves off and focus on salvaging some points that we lost from racing today.”

Sunday local time’s racing will air live on Fox Sports and on Kayo Sports at 9:30pm AEST. Kayo Sports are offering fans free access to both the live and replay racing, via it’s Kayo Freebies offer.