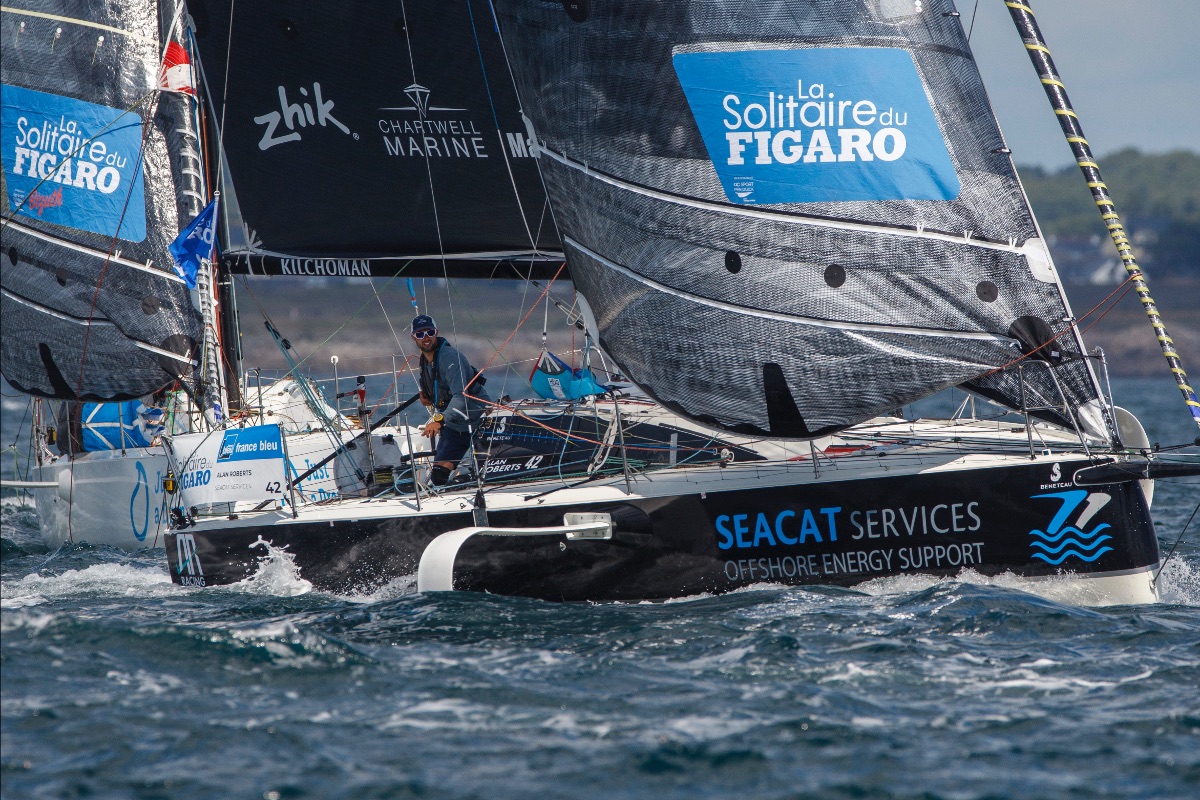 The final stage of the 52nd La Solitaire du Figaro promises to be a long, slow, complex finale 685 miles from the Bay of Morlaix around the Fastnet to a finish line off Saint Nazaire on the Loire Atlantic coast where the four-stage race started on Sunday 18th August.

Because of the light, unpredictable winds and complex weather systems, this longest leg of the race looks like it might take the already heavily fatigued sailors at least four nights at sea.

This will be one of the most challenging mental and physical finales to the race of recent years. An exceptional mental approach, rigorous self-management and clever analysis of the evolving, messy weather systems will be required.

The final stage starts 1600hrs local time on Sunday, opening with an eight-mile coastal course which should send the 34 skippers on their way in a forecasted 10 knot north-easterly. As they leave the Bay of Morlaix – which has produced so many of Franc’s recent great ocean racers – they leave the Est Astan to port and then the course is completely open, climbing 270 miles to the Fastnet which is the only mark of the course.

Weather was described in this afternoon’s skippers’ briefing by Météo Consult’s Pascal Scrivener as ‘very, very difficult, very complex’. There are numerous small, evolving, unpredictable depressions and windless zones. The 412 miles return stage back towards Saint Nazaire should be under spinnakers in light to moderate breezes. Race Direction have the option of shortening the course outside the channel into Saint-Nazaire.

At the top of the leaderboard the three leaders have a decent advantage and under normal circumstances on a more predictable finale would be hard to topple. Pierre Quiroga (Skipper Macif 2019) has 1hr 53 mins and 44 seconds in hand over Xavier Macaire (Groupe SNEF), who in turn is 39 minutes ahead of the third placed Tom Laperche (Bretagne – CMB Performance).

However, the trio occupying the podium places have a further 2hrs and 47 minutes back to fourth placed Alexis Loison (Région Normandie). But with this long, complicated finale anything could happen, and no lead is safe.

A first ever podium finish, third for Alan Roberts on this last stage, sees the skipper of Seacat Services promote himself to tenth, the same position as he finished in 2020. The English skipper has a lot to make up if he were to get onto the final podium – and he is in a good place mentally after the last leg – but he is 5hrs and 17 minutes behind Quiroga.

Roberts, though, is only 34 minutes off ninth placed Eric Péron (French Touch) but needs to make up 56 minutes on Gildas Mahé (Breizh Cola) if he is to realise his best ever finish, bettering the ninth place he finished in 2015 on the Figaro 2.

Ireland’s Tom Dolan (Smurfit Kappa-Kingspan) is 19th, 8hrs and 16 minutes behind the leader and almost three hours outside the top 10. What is surely hurting Dolan most is having been caught in the tidal current outside Roscoff for almost exactly those three hours, a fate which has befallen many racers in the past, indeed many with longer and better racing histories than his.

What is encouraging especially about this race is that although there are big time gaps, everyone has a target, a goal, a rival and no one is alone and out of touch. Jesse Fielding, the irrepressible American needs to beat David Paul by four minutes to get off the bottom step and indeed all of rookies at the lower end of the rankings were still pushing, still racing until the end of Stage 3.

Roberts (Seacat Services) is resisting the urge to stay up this evening and watch the young British tennis player Emma Raducanu compete in the final of the US Open, instead will look to get a good night’s sleep.

“The general weather picture is quite complex because there are a few systems around driving the weather. However, coming off these systems there are troughs, high pressure ridges and cold fronts. So, we have these three features all tightly packed together because they are blocked by a high pressure over Europe and the low pressure which is coming in passes over quite quickly.”

“This means there are a lot of shifty winds, the timings are hard to gauge, and not much pressure in between, so it could be anything.

“The longer the leg goes on then actually there is more chance all this pushes through.Overall, this leg is about dealing with it as it comes though. We have to get across the Channel to start with and either that means north through the TSS at Land’s End or west to the Scillies or down through Ushant.

“You cannot cover the fleet on this leg, we will lose a lot of people on AIS. Actually, you need to pick a strategy and stick with it. I think we will see little groups of boats with the same strategies or indeed we might get the whole fleet sticking together. But someone might go for a big one.

“Anyway, I will be a little more conservative I will sail the weather and what I see happening rather than the fleet. I will make decisions and go for it. That will be influenced by this being the last leg and this is the time to go for it.

“Once round the rock there might be some thermal breeze up off Ireland but still quite light.

Eric Peron (French Touch): “The stage will be long with pretty light conditions but really it is full of strategic opportunities so it will be great even if we will be tearing our hair out again. But it’s good for the sport. This will be a special stage for me, because it’s going to be my last one for quite a while, maybe the last Solitaire of my career and so I would like to finish in style.”

Pep Costa (Spain, Cybele Vacances – Team Play to B): “I really feel great. I got some good rest. Honestly, I expected to be really dead, and I am not, yet I did not rest so much during the stages much; I think it’s the first time I’ve slept so little while racing.

“I am very motivated for the next step. The Fastnet is a legendary racing mark, a bit like Cape Horn in the northern hemisphere. I’ve never been there and do it solo, and in Figaro, will be just great. It is true that it is a long course, it will be very demanding: I will give it my everything and continue to build my experience.”

Corentin Horeau (Mutuelle Bleue pour l’Institut Curie): “I’m still a little tired, I can’t wait to go but the last good night’s sleep to come will be a real pleasure because we are well toasted, However, it’s the same for everyone. It’s going to be a great stage with a lot of downwind stuff and so it will be fun.”