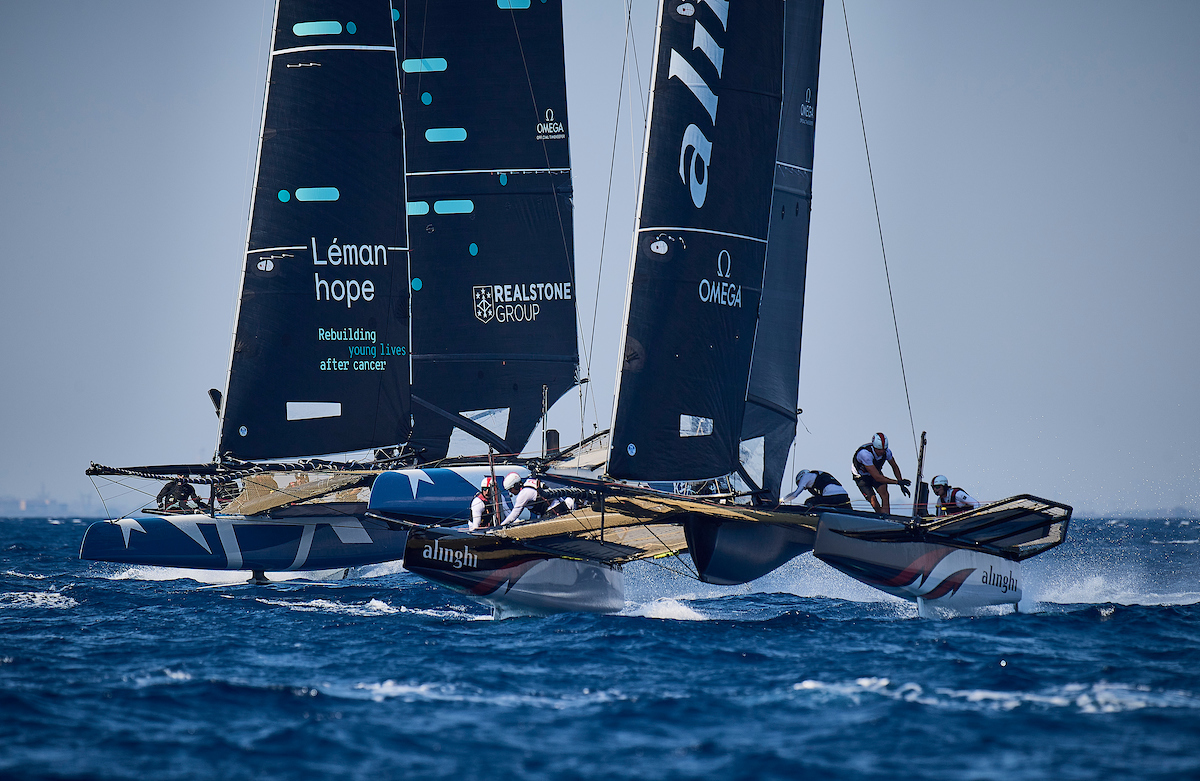 Realteam and Alinghi in the mix - Loris Von Siebenthal pic

TF35 Trophy Principal Race Officer, Benoit Deutsch, picked his moment well today to get two thrilling races in, with the boats foiling upwind at 24 knots in 16 knots of breeze, before the heavy mistral wind cut the day short.

The first race of the day started in a 10-knot breeze that quickly built to 12. In a change of playbook from the start of the regatta, today, the right of the racecourse was favoured. The whole fleet started on port apart from Realteam Sailing, who came flying into the start on starboard, crossed the entire fleet on the line and at the windward mark was ahead by the smallest margin – Alinghi and Spindrift chasing hard.

In the second beat, Realteam Sailing again went left alone, Alinghi and Spindrift right, but this time Ernesto Bertarelli’s Alinghi rounded the windward gate ahead by seconds, a position he held until the finish line.

“The competition is very tight. We are meeting Realteam frequently at the top mark and racing hard; there have been a few close calls for the umpires,” said a delighted Bertarelli at the end of the day. “They are strong in all conditions and have a solid upwind mode, so it’s pushing us to the limit.”

It was a quick turnaround for race two of the day as the wind started to nudge over 14knots. Again the whole fleet started on port apart from one; Team SAILFEVER hooked the Race Committee boat and flew full speed on starboard into the oncoming fleet, resulting in a scrabble onboard Realteam Sailing and Alinghi to avoid a collision.

At the first windward gate, the fleet was still compact despite the enforced split from the start, Spindrift Racing leading, followed in quick succession by Zoulou, Alinghi, Zen Too and Realteam.

As the boat speeds on the GPS tracking started to hit the mid-30s downwind and the mid-20s upwind in the second lap, the tension from the race officials was palpable. Shortly after Spindrift stormed across the line to win the race the AP over H flag was displayed and the teams returned ashore.

“We finished fifth and third, so it was a good day, but honestly, two races were enough,” admitted Zen Too helm Frédéric le Peutrec on the dock. “The last race was choppy with 20 knots at the top mark, but we had good fight, good speed, good coordination and no mistakes for the first time this regatta.

“On board, it is a question of concentration and coordination. It is a pleasure to be this focused on the racing as the boat is so powerful – the top of the mast is at 21m over the water, so with main and jib, it’s full power and really exciting.”

For the last day of the TF35 Scarlino 1 tomorrow the wind is again forecast to be strong. Follow the action live from the TF35.org homepage.

Results After 10 races and 1 discard: