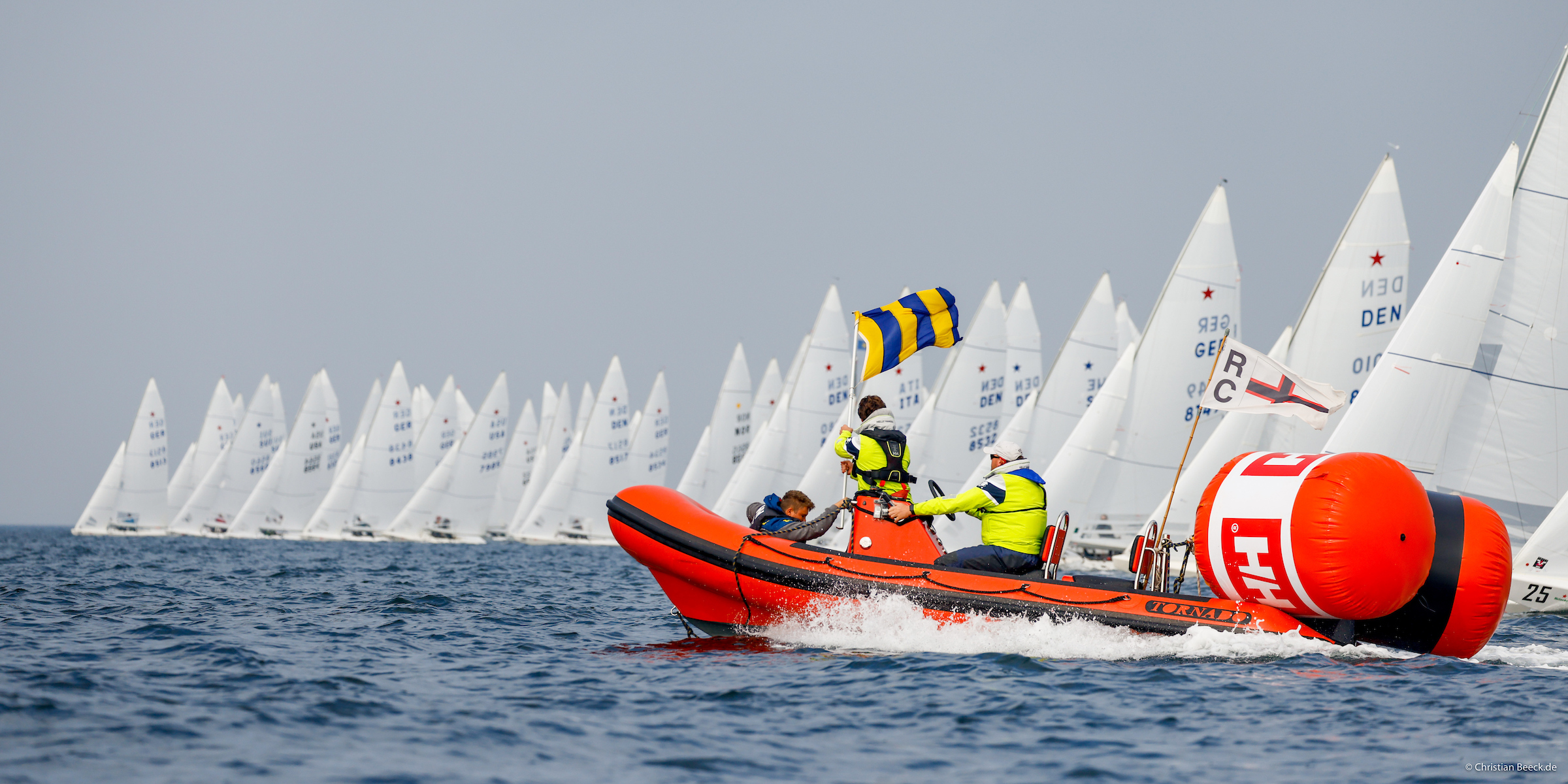 The Race Committee had their hands full - segel-bilder.de pic

The fog lifted, the wind picked up slightly, just in time for the final race of the Star World Championship during Kieler Woche in Germany, and while Frithjof Kleen and Diego Negri, who had already been crowned world champions stayed ashore, the remaining 82 crews from 18 nations were fighting for medals and placings at the host venue of the 1972 Olympics.

It was a tough fight for the podium places. At the end of the day, Tokyo Games Laser silver medallist Tonci Stipanovic and Tudor Bilic (CRO) in second, and Johann Spitzauer/Hans-Christian Nehammer (Austria) in third, celebrated their podium finishes alongside Negri/Kleen.

In the fight for the remaining podium places, the top crews were ready to take any risk. The pressure on the start line in the last race was enormous. Race director Mandus Freese had to call back the rash fleet three times. The third time it cost 18 crews the chance to continue. They had to leave the course with their early start disqualification.

The list of disqualified crews also included sailing celebrities; the defending champions Mateusz Kusznierewicz/Bruno Prada (Poland/Brazil) had emphasised before the race that they wanted to start cautiously, as they already had an OCS on Thursday. However, they were identified as early starters and taken out of the race.

Kusznierewicz did not agree with this. “We sailed for safety and from our point of view it was not a false start. We even had a boat ahead of us that was not disqualified,” he said.

His request for redress was granted by the jury in a long protest hearing, but the credited points were not enough to reach the podium.

The fight for the medals was decided between the Austrians Johann Spitzauer/Hans-Christian Nehammer and Stipanovic/Bilic . Past World Champion, Eivind Melleby (Norway) with Guy Thomas Avellon and Jörgen Schönherr, who has three-time European champion Markus Koy (Hamburg) on board, were also still in the game.

While Schönherr and Melleby got off to a good start in the race, Spitzauer and Stipanovic had to work their way through the field after a slow start. By the second lap, however, the Austrians and Croats had caught up to such an extent that they were already on course for the medal.

Schönherr/Koy led the field ahead of Melleby/Avellon and crossed the finish line in the same way, but the points gap in the overall standings was too high to make it onto the podium.

Spitzauer/Nehammer would have needed a top result directly behind the Croatians to win Silver in the final race. For a long time, they had the best cards in their hands, but then Stipanovic, in his first World Championship appearance in the Star, pulled off a winning move on the finish cross.

While Spitzauer/Nehammer went to the left side, Stipanovic/Bilic tacked to the right in the middle of the finish cross and found the right wind to pass the Austrians. Americans Benjamin Sternberg/Stuart MacIntosh tipped the scales; they were also overtaken by Stipanovic but had Spitzauer in their wake.

This result was enough for the Croatians to win silver ahead of the Austrians. Behind them in the overall standings were Jörgen Schönherr/Markus Koy (Denmark/Germany), Mateusz Kusznierewicz/Bruno Prada (Poland/Brazil) and Eivind Melleby/Guy Thomas Avellon (Norway/USA).

“We are very happy. It was a tough race. We had a good set-up, changed the sails a bit. At the start we went for safety. That paid off, because some competitors got caught,” Stipanovic reported.

“We were not satisfied with the first cross, but then we did very well on the downwind course. On the last cross I said to Tudor, ‘we have to push our luck now’.”

Seeing the cloud over the course and spotting a right turn of the wind in the leading duo, he set the tack. This saw the Croatian climb to third in the race. “With the changing wind, I was still a bit worried that the Americans would still be overtaken by the Austrians. But then it went exactly our way.”

The new medal winners were happy all around. And those responsible for the World Championships were also satisfied with the way things went. After the first two days of light and variable wind, Star Class World President, Hubert Merkelbach, had concerns that the Worlds might not be awarded at the end of his term of office, at the home event of all things.

“However, it did happen, and all the participants are happy. Kiel was a great host. It was fantastic.”

Following four years at the head of the class, Merkelbach’s task is to prepare the field for his successor. There is a high probability that Enrico Chieffi will be elected as the new president in the winter. The 58-year-old Italian won the Star World Championship in 1996 and is the reigning European champion. As a former Olympic participant, America’s Cup sailor and CEO of maritime companies, Chieffi is very well connected in the sailing scene.