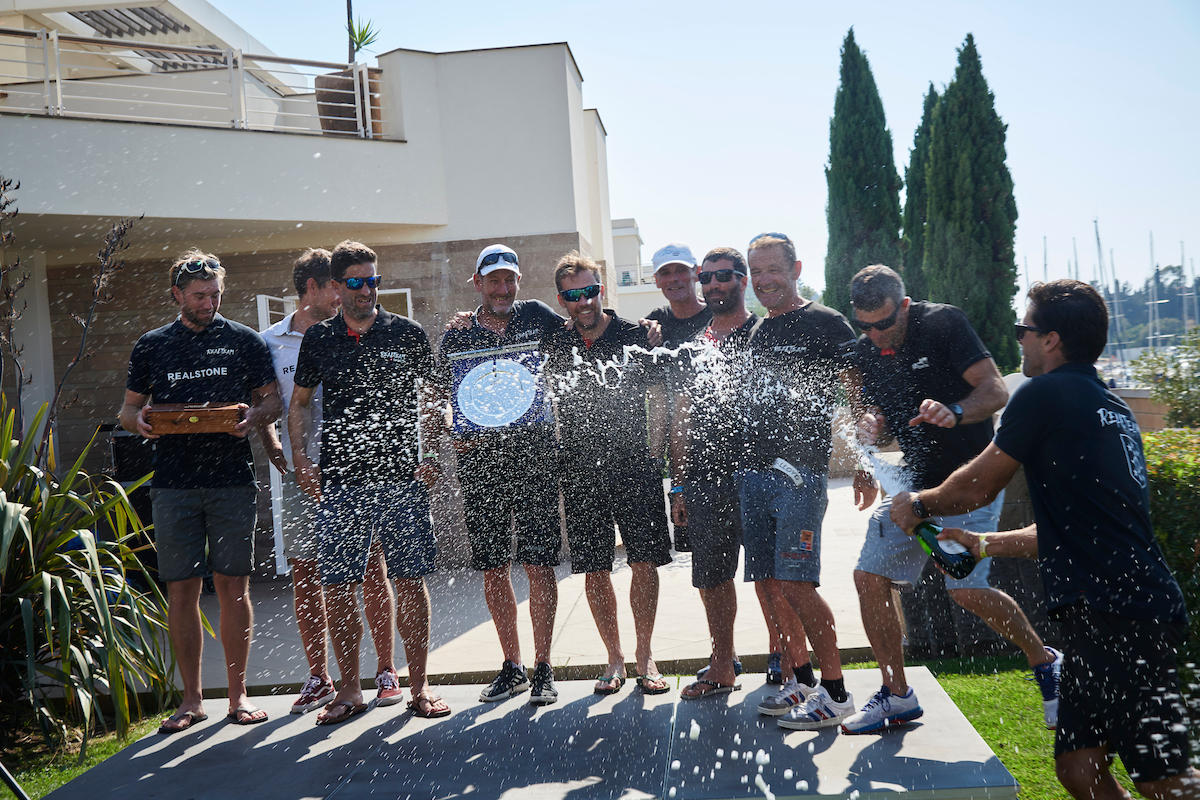 Esteban Garcia’s Realteam Sailing, co-skippered by Jérôme Clerc, triumphed at the end of a thrilling final day at the TF35 Scarlino Trophy.

After four days of racing, Clerc and the team were head-to-head with Alinghi until the last race in sparkling sunshine off the Tuscan coast.

“Alinghi sailed well, so it is hard to put points between the two of us,” admitted Clerc as the champagne was being sprayed to celebrate their win. “We fought until the end today; they won the first race, and we won the second. We are happy to be first overall, but it was a tough regatta.”

The TF35 fleet’s first experience of open water racing couldn’t have been more impressive. With blue skies and 25°C water, Scarlino, Italy, slowly ramped up the conditions starting with a comfortable 8 knots and flat seas on Thursday. But the event ended today with 16 knots and rolling waves at which point the Principal Race Officer, Benoit Deutsch, had to send the teams ashore after only two races.

While Realteam and Alinghi dominated the points on the leaderboard, it wasn’t without challenge on the water. Third overall, Spindrift claimed four race wins this regatta: “It’s been interesting to see how the TF35 behaves over the past two days when the wind has been up,” explained mainsail trimmer Duncan Späth. “When it reaches 13-14 knots, the decision onboard is to sail better, stronger and safer because you have to be confident when the boats are moving so fast – it can get pretty intense”.

After winning three out of a possible five regattas this year in the TF35 Trophy’s inaugural season, Realteam Sailing holds her position as the overall leader.

Two points behind, Alinghi has one last chance to claim the title at the season finale in Scarlino in just ten days. Mainsail trimmer Arnaud Psarofaghis said that the two teams are so similar now in speed and manoeuvring; the only difference is who makes a mistake first. “I think we can improve by taking more risks to give us some leverage on them,” Psarofaghis said. “But then, on the other hand, if we sail well and keep it simple, we can be ahead. We need to sail clean and be patient.”

Of the rest of the fleet Team SAILFEVER finished the event in fourth place; their best result of the regatta was a second in race seven. Ylliam XII – Comptoir Immobilier opened in Scarlino with a third and finished today in fifth overall. In sixth, Zen TOO’s moment of glory was a third-place finish in the strong winds of Saturday. Finally, Zoulou, unfortunately, missed the final day of racing, having struggled with a repair all weekend that finally gave up as the team hit 24 knots of boat speed foiling upwind in yesterday’s Mistral.

The TF35 Trophy 2021 finale will play out in two weeks on the same waters.