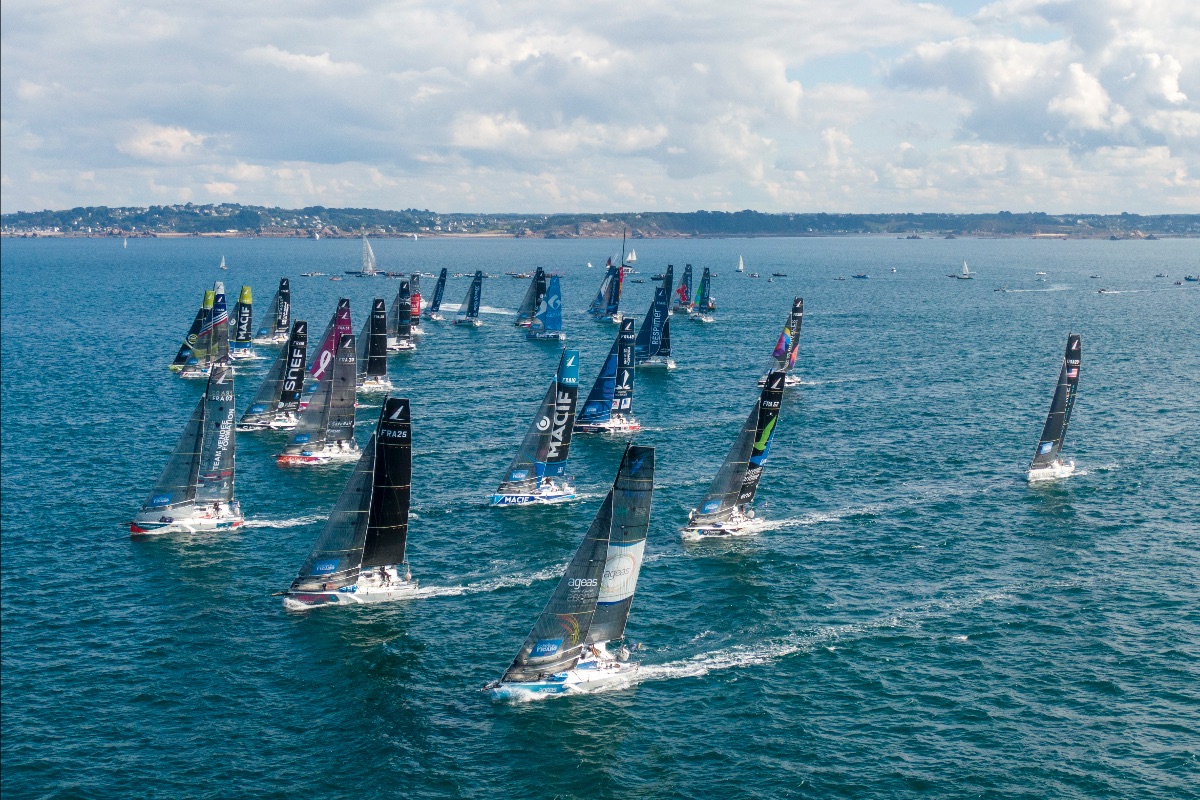 The 34 yachts left the Bay of Morlaix yesterday for the final stage of La Solitaire. Pic - Alexis Courcoux / La Solitaire

Corentin Horeau (Mutuelle Bleue pour l’Institut Curie) led the La Solitaire du Figaro fleet out of Bay of Morlaix this afternoon at the start of one of the longest legs in the recent history of the 52nd edition of the French annual multi-stage solo offshore race.

The final stage of the epic 685 nautical mile race, will take the 34 competitors to the Fastnet Rock and back to the finish line in Saint Nazaire on the Loire-Atlantic coast.

The stage promises to be long, mostly slow and very complex. Weather routing experts predict that the first boats will finish any time between late Thursday and late Friday. Some models even run into Saturday. Besides the very slack pressure gradient over the Celtic Sea and the Channel meaning mostly light winds, there will be a particularly challenging low-pressure trough descending from the Fastnet rock Tuesday morning which might split the fleet.

After the 270 mile run and reach passing the Scillies and Lands End under big spinnakers the fleet leaders might be blessed with a favourable timing which will allow them to transition to decent downwind conditions back towards the French coast if they come away from the mythical rock ahead of the trough.

But on the other hand, others could suffer with a conflicting, thermal breeze cancelling the new northerly breeze near the rocky lighthouse which was known as ‘Ireland’s teardrop’ as it was the last landmark the 19th century emigrants saw as when they sailed for the new world – North America. There is a good chance that the fastest boats might be able to escape and open a gap. But there will be chances to recover for those at the back of the fleet, and the final outcome will most likely not be decided until 20 nautical miles out from the finish.

Francesca Clapcich (USA/ITA Fearless-State Street Marathon Sailing) said, “I feel good. I think this will be a very long leg maybe five days and so it will be important to keep up the pace and make a lot of gybes and a lot of decisions in light winds. I have got a lot of rest here, a lot of good food, I am ready to go. It will be important to take it a little bit easy at the beginning and not make mistakes on the coastal course. It will be the big kite for five days and so we need to keep it good.”

In terms of following a long-term strategy, the biggest problem for the solo racers is that the weather phenomena are small and evolving. As the solo racers are not allowed to receive detailed weather information beyond the most basic updates from public marine broadcasts or the race’s weather forecasts broadcast by VHF from the Race Direction boats, identifying and monitoring changes to small systems becomes increasingly difficult as the race goes on.

“I could not really dream up a more complicated leg if I tried. And it is long,” said Marcel Van Triest, weather adviser to the Lorient Grand Large race group.

“It is pretty complicated. At times I am just telling my guys to keep it simple, sail the most direct gybe when you don’t know,” said Christian Dumard, Van Triest’s counterpart at Team Vendée Formation.

In line with Race Director Francis Le Goff’s abiding philosophies, the course is left as open as possible this time with no turning or passing marks other than Fastnet while observing the various shipping channel rules, notably the Traffic Separation schemes at Land’s End, Fastnet and Ushant. Le Goff has also notably restored the race to a real long hard-core test, eschewing the previous 24-hour sprint stages which were the finale of recent races, instead favouring one final ultra-marathon.

Pierre Quiroga (Skipper Macif 2019), the leader on the General Classification who has won two of the three stages so far and finished second on the first stage, was well placed – in the main peloton – as the fleet left the Bay of Morlaix. Ninth overall last year Quiroga will have to put on hold any celebrations for his 29th birthday on Tuesday, but may well have a bigger reason to pop the Champagne corks come the end of the week in Saint Nazaire. He carries a lead of 1 hour 53 minutes and 44 seconds.

As he left the dock in Roscoff in the early afternoon September sunshine Quiroga smiled, “The crazy thing is that victory in the this super long and super tough Solitaire will be a magnificent achievement, whether it’s me or not. Today everyone has their doubts, their thoughts, their theories about the time gaps on the provisional general classification. Everyone plays with what they have and what they have to do and you have to play to your strengths. I am just like everyone in that respect in being stressed and having doubts.

“You have to stay humble on this stage in these kinds of conditions, where there will be little wind, current and weather systems to cross. I think the key is to have fun, and from the start I have done just that, I have had a blast on this Solitaire. In Roscoff, we didn’t have time to rest. If anything we have just managed to maintain our energy levels but we do have not increased them. We’ll make do with what we have left in the tank. “

Britain’s Alan Roberts (Seacat Services) was in tenth place, just a couple of hundred metres behind Quiroga, as the fleet started the 105 miles reach to Land’s End where the first big tactical decision will need to be made early tomorrow morning, to go east or west of the Longships Traffic Separation Scheme off Land’s End.