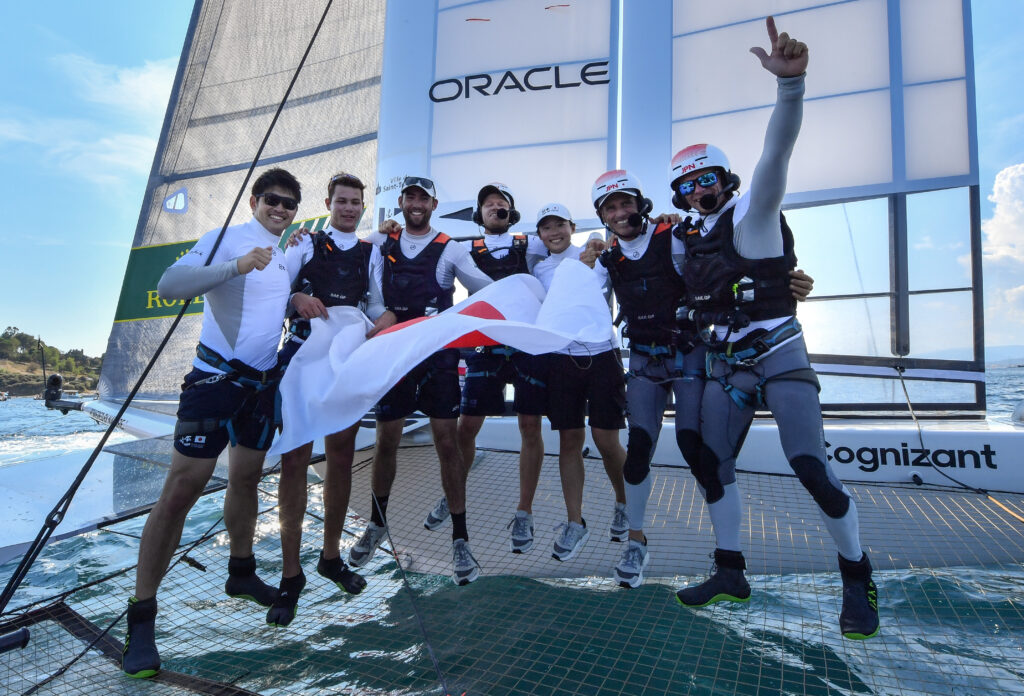 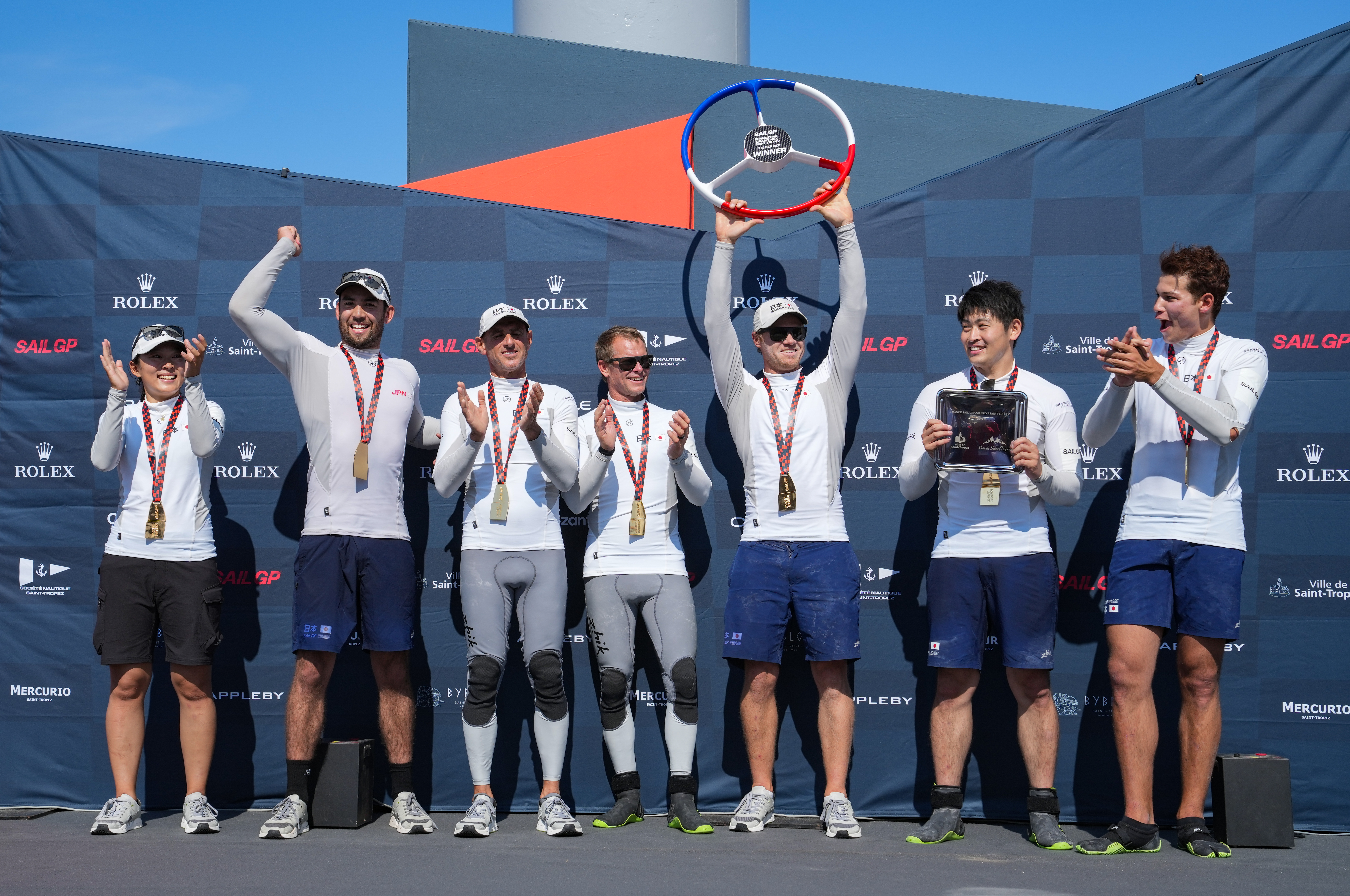 Japan SailGP Team won the event, getting the most out of the newly-fitted 29 metre wingsail. Pic - Bob Martin for SailGP.

The scintillating waters of Saint-Tropez lit up with excitement for thousands of fans on the final day of racing of the France Sail Grand Prix, the fifth event of the season.

Equipped with the newly-fitted, mammoth 29 metre wingsail, the continuation of light-wind conditions did not hold back the eight-nation fleet from an exhilarating day on the water, and a major win for Nathan Outteridge and the Japan SailGP Team.

Japan made the most of this newly discovered wing-power. Driving the team to its second win of the season, Outteridge once again lived up to his nickname as the ‘wind whisperer’, mastering the conditions and putting in an elite display exactly when it mattered. Japan won the three-boat final podium race, beating out Jimmy Spithill’s U.S. team in second, followed by Spain in third driven by Phil Robertson.

Outteridge said: “We are very happy with another win on the scoreboard and it’s always good to be in the event final, as at the end of the day it’s practice for the real one at the end of the season, that really matters with the million dollars at stake.

“But it was pretty tricky out there. Jimmy [Spithill] did a great job at the start of that last race but once again we managed to sneak past him. Last time in Taranto it was bad luck for Jimmy whereas with the win this time, that top mark decision was either left or right. It was still quite stressful from then until the finish because you never knew what was going to come.

“I think we have done a little bit more training with these 29 meter wings [than the other teams] but not myself personally, I had maybe an hour in Aarhus after that event. Chris [Draper] had done three days before that so we knew what we were in for in terms of it being bigger and heavier. Yes you can generate more power but getting foiling wasn’t really any easier.

The result propels the Japan team to the top of the leaderboard, overtaking Tom Slingsby’s Australia team.

“We are very happy to be leading overall now, I think we’ve had a bit of an up and down season so far but that’s two podium finishes for us now and a couple of points lead overall,” Outteridge said. “We really want to finish off the European season in a strong position so I guess the goal again is to be in the top three at the next event in Cadiz, Spain and it gives us a good chance to go home and get ready for the remainder of the season.”

The U.S. appeared to be the favourites heading into the three-boat podium race, topping the rankings during the weekend’s races, however, Japan’s dominating performance in the winner-takes-all clash forced Spithill’s team into a solid second place finish.

Spithill said: “It was a great race and a great event for our team. It was dynamic, lots of minefields on the racecourse and we have to give credit to Japan for sailing a good race.

“I think in those conditions you know you’ve got to sail with the wind you’ve got. You need a few things to go your way, but again overall, I think Japan is sailing well in those sorts of conditions compared to the fleet. It seems to be if it gets light and shifty, up and down, they seem to have a little edge on the fleet, so you have to give them credit.

“Of all of the teams, Chris Draper [Japan wing trimmer] has spent the most time on the 29 meter wing but I don’t believe that was the reason for Japan’s win today, I believe they just sailed better at the end.

“Overall, as a team, I was very impressed with our guys, especially with changes in the roster and CJ [Paul Campbell-James] back after injury so to walk away with a second is a good result.

“We continue our climb up the leaderboard. This is our first event where we did not have an incident on the water involving someone breaking a bone, hitting an object or sinking and we’ve still got some time. We’ve got another couple of events so we’ve just got to keep chipping away and putting the results on the board and we will be in the running for the million bucks.”

Sliding up the event leaderboard, Phil Robertson’s Spanish team earned its place in the final podium race in Saint-Tropez, despite having its boat damaged by the British in the fifth race. Spain remained unfazed in its hunt for a trip to the podium, and a penalty for Ben Ainslie’s team would ensue.

Robertson said: “At the start of race five we were in quite a strong position and then Ben [Ainslie] thought there was a bit more of a gap than there was. He came in and wiped us out, putting a massive hole in the back of our boat. It was a bit of a shame and a bit concerning and not ideal. It didn’t help us out and it probably didn’t help him out either.

“It doesn’t make it easy when you get a big hole in your boat, you’ve got to repair it and make sure it’s structurally okay to get racing again so it wasn’t the best preparation for the final. We finished third but we lost the finals, so we’re not super stoked with how it went. We didn’t sail superbly but it was a tough racecourse.”

With just shy of a month-to-go, Robertson’s team is looking forward to its home event in Cádiz-Andalusia, Spain on October 9-10.

Robertson adds: “One of the big things this weekend was to try and build some momentum in the lead-up to our home event in Cádiz and make sure we can carry on and build from this. I think we’ve done that, I think we put down a solid performance and the team has got a nice little rhythm, so come Cádiz we are going to be pushing pretty hard to be on that top step of the podium.”

Apologetic for the aggressive manoeuvre at the start line for race five, the penalty to Ainslie’s team would cost them prime race positioning, and ultimately a shot at the podium race.

Ainslie said: “We had a reasonable first race today which set us up with a good shot of getting into the top three, but we needed to push in the second race. We had a gap and went for it but unfortunately it closed up right at the last moment between Spain and Denmark and we couldn’t quite feed the boat through. We had a collision with Spain and rightly got the penalty for that. That cost us the race and the shot at getting at the top three.

“That said, I think we’ve learned a lot from this event, sailing the boat in these conditions and using the new 29 meter wing, which was a great success. Whilst we are frustrated about that final race there are many positives to take away going into Cádiz with the championship getting tighter and tighter at the top. It’s very close on the overall leaderboard which is super exciting.”

New Zealand had looked set to qualify for the final following a string of impressive results. A last place finish in the fifth race saw the team miss out on the winner-takes-all podium final by just a single point – placing Peter Burling’s Kiwis in fourth.

Disappointment for Sehested’s team when Denmark suffered a snapped jib sail that likely cost them a place in the final, despite their impressive ability to finish the first race, and win the second. The Danish end the weekend in a respectable fifth position.

Great Britain ranked sixth, failing to capitalise on its win in the opening race of the event, and were penalised four points for making contact with Spain which summed up Ben Ainslie’s disappointing weekend saw them drop from second on the overall leaderboard to fourth.

Unable to gain enough momentum for a win after its performance on Saturday, Billy Besson’s French team finished seventh, while surprisingly – after two back-to-back event wins and looking for a hat-trick – Tom Slingsby’s Aussie team took the bottom spot.

SailGP prepares to head over to Cadiz-Andalusia, Spain (October 9-10) to complete its European leg of events before taking a break ahead of the Sydney Sail Grand Prix, December 17-18, to finish off 2021.