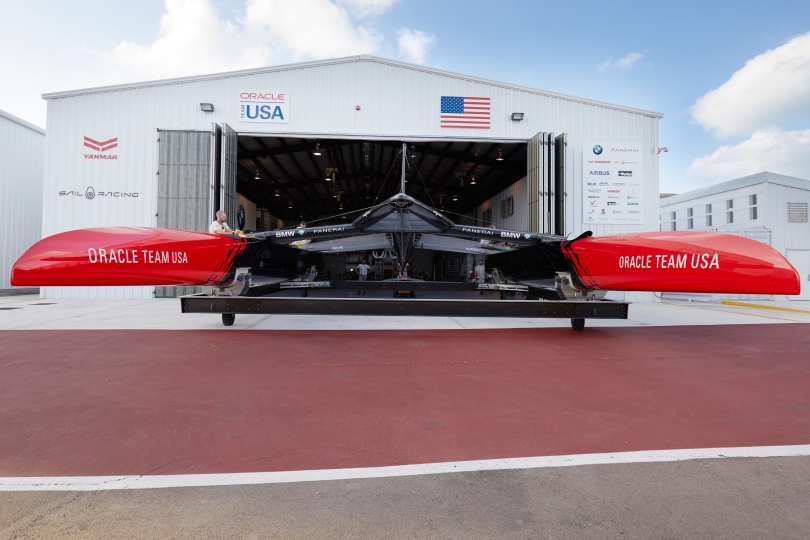 On Tuesday evening, ORACLE TEAM USA held a ceremony at its team base to reveal its new America’s Cup Class boat, “17”, the foiling catamaran the team will race this summer in Bermuda.

“This is the boat we’re racing to win the America’s Cup,” said skipper Jimmy Spithill, addressing a crowd of family, friends, team partners and dignitaries.

“We need to get this boat out on the water and put the hours in getting it ready to race,” Spithill said. “The long days will continue.”

This week, “17” will be launched and testing and development begins in earnest and won’t stop until the final race of the America’s Cup.

“Many of the major design decisions have been made and have been built in already to what you see tonight,” said Scott Ferguson, the design coordinator for ORACLE TEAM USA. “But the refinement and optimization process never stops. We know there is still speed to be found between now and May 26 when racing begins in the Louis Vuitton America’s Cup Qualifiers and that’s our focus for the coming weeks.”

Over 15 designers and 50 boat-builders have contributed to the design and build of “17”, with more than 85,000 man-hours accumulated to date. Team partners like Airbus, BMW, Parker and Yanmar have provided technical expertise and support.

“This is a major milestone in our campaign to win the America’s Cup for a third time,” said Grant Simmer, the chief operating officer of ORACLE TEAM USA.

“These boats are highly-engineered, with complex systems, and built to perform under extreme conditions. It’s a great achievement by our designers, builders and engineers to get us to this point where the race yacht gets handed over to the sailors.”

With his 14-strong sailing team on the podium beside him, and flanked by the America’s Cup trophy, skipper Spithill invited the guests to get a look at the yacht that will carry the aspirations of the team to win the prestigious trophy for the USA for a third consecutive time.

“I'm really proud of this team and what we've achieved so far,” he said. “I'd like to thank the design team, the engineering team, the shore support, and our full boat-building team, including the guys who couldn't be here.

“They've made an incredible racing machine.”