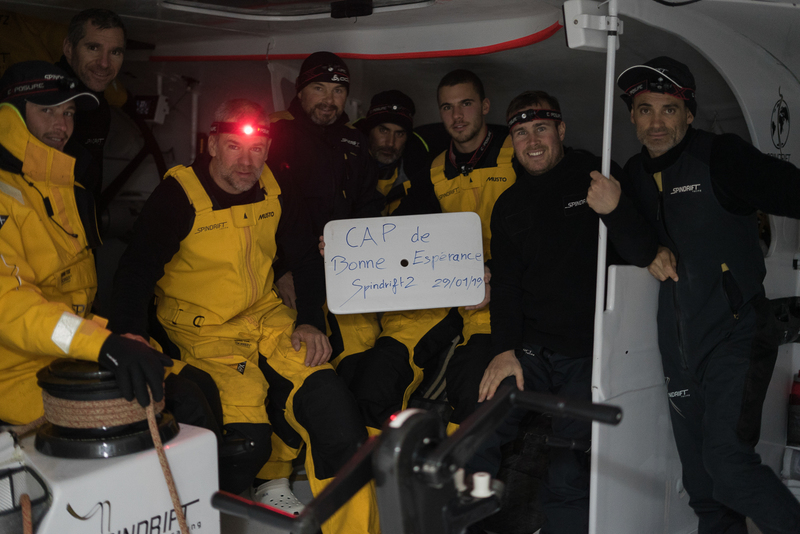 After 12 days, 14 hours, 58 minutes, Spindrift 2 reached the longitude of Cape Agulhas on Tuesday at 0240 UTC (0340 French Time), sailing from the Atlantic to the Indian Ocean. Whilst maintaining the lead on Francis Joyon and his teams’ world record of 6 hours 43 minutes.

In order to reach this point of Africa, Yann Guichard and his eleven crew members had to sail around the Saint Helena anticyclone to be able to benefit from the downwind sailing of the Southern Ocean, in other words, a 700-miles round tour…

The first of the three symbolic Capes of this round the world sailing race, the Cape of Good Hope, was reached after just 12 days 13 hours 8 minutes: one of the best ever times of the Trophée Jules Verne, which first started in 1993. But it was several miles away to the South East, at Cape Agulhas, where the time reference comes into its own as this point of Africa marks the entrance into the Indian Ocean. However, in order to reach it, Spindrift 2 had to navigate around the Saint Helena anticyclone, go through an oceanic ridge and finally, take a left before heading towards Cape Agulhas.

Despite this detour, which forced the black and gold trimaran to dive South up to 43°, Yann Guichard and his 11 crew members keep a lead: 6 hours and 43 minutes, (equivalent to 300 miles) on the reference time of IDEC Sport, the current record holder. As a result, Spindrift 2 took 12 days, 14 hours, 58 minutes from Ushant to reach Cape Angulhas, and from the equator, 7 days 17 hours to go beyond this point in Africa.

“We had to take a large detour to get around the Saint Helena anticyclone: we had to go down to 40° South before turning left! It was pretty extreme, but we didn’t have any other way of cutting across: we just had to grin and bear it, especially as we had had a crosswind and head seas which weren’t easy to navigate through… For three days we’ve been stepping up the pace and it feels good: we’ve just reached the Cape of Good Hope and we’re sticking to the targets we set out for ourselves.” said Yann Guichard after reaching Cape Angulhas.

Taking confidence from this reference time entering the Indian Ocean, which remains the third best time in the Trophée Jules Verne, the skipper, his crew and their onshore router, Jean-Yves Bernot, are pretty comfortable about the next stage as the Mascareignes Anticyclone (Southern Madagascar) is well placed on Crozet Island and will start to head North over the next few days towards the Kerguelen archipelago, pushed by a southern depression. At an average speed of over 35 knots for 3 days, the black and gold trimaran will be able to hold this steady pace through a relatively manageable ocean heading to south of the Kerguelen!

“The sun has been up for a couple of hours and we really know we’re in the Indian Ocean! We’ll be reaching 50° South soon, the weather’s grey and temperature of the water is 2°C… But with albatross at our side, it’s amazing! The conditions are on our side to help us reach Kerguelen quickly. We’ll leave the Kerguelen to the North as we’ll undoubtedly go down to 53-54° south. However, we’ll also have icebergs ahead of us from Wednesday: we’ll need to keep watch on the radar and with our infrared glasses. It’s looking a bit tense… We should sail the length of the anticyclone while being powered along by the southern winds: it’s looking pretty good up to the Kerguelen, but after that, we’ll have several gybes to go which will slow us down a little. We should still get through the Indian Ocean quickly without wasting too much time and hope to get to the Pacific, South of Tasmania with too much delay.” Mentioned the skipper on Spindrift 2.

If this southerly course enables the team to shorten their route while benefiting from a sustained current, going down to 53° South would present them with the problem of drifting ice and where a number of icebergs have been clearly located by the CLS satellites. On this stretch of the route, Spindirft 2 needs to be very fast because Francis Joyon and his crew made the Indian Ocean crossing extremely quickly as they still hold the WSSRC record (5d 21h 8m)! Having said that, the capabilities of the black and gold trimaran in the breeze give hope that it will retain the lead on IDEC Sport’s timing to South of Tasmania, the hot spot between the Indian Ocean and the Pacific.