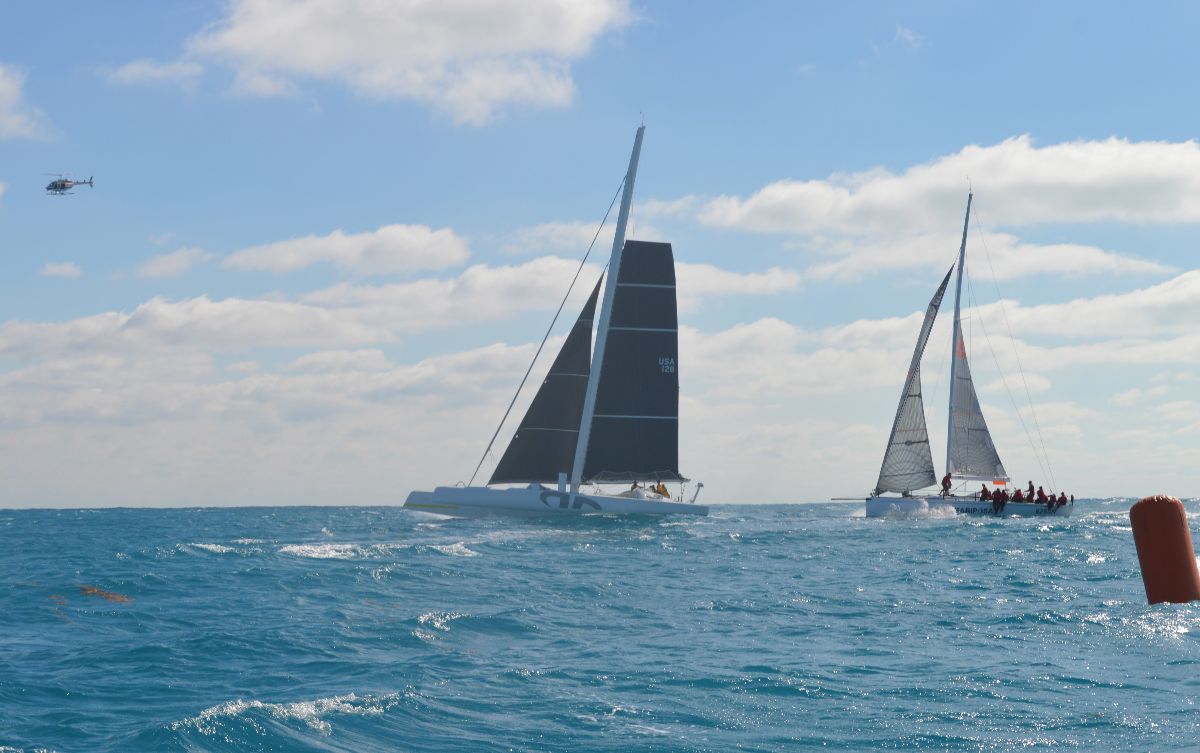 Argo at the start of the Pineapple Cup. Photo Credit: Manuka SEM.

Miami, Florida (January 27, 2019) – Under sunny skies, an 18 knot northwesterly and 10 foot swells it was the IRC and Multihull fleets turn to start the 811 nautical mile Pineapple Cup – Montego Bay Race.

At 2:05 ET the Volvo70 Wizard skippered by Peter and David Askew with Charlie Enright navigating launched across the line followed closely by the Mod70 Argo and then the Ker46 Lady Marisopa. Over 100 sailors from 13 countries including Volvo Ocean Race and America's Cup champions are taking part in this 34th edition of one of the oldest offshore races in the world. Tracking will update every 30 minutes at: http://pineapplecup.com.

This is the first time since 2003 that multihulls have competed in the Pineapple Cup. The multihull course record of 2 days 20 hours 8 minutes and 5 seconds was set in 1999 by the late Steve Fosset's Orma60 Lakota.

When asked about the weather and if they think they'll be able to break Lakota's record, Anderson Reggio, Navigator on Team Argo said, “We're going to be chasing this front as we go offshore and it looks pretty unlikely we are going to be able to punch through it and get back to anything worthwhile to help get us down the track. So we could be in a situation where we would have to wait for the next system for the breeze to come down to give us help. If that's the case, we could have a very, very slow 24-hour period earlyTuesday into Wednesday. Right now it's looking like an early Thursday morning arrival, which would put us ahead of the multihull record.”

As of the 5pm position report, Argo was blasting ahead at 30 knots followed by Wizard who were broad reaching in 18 knots. Race Management received word just prior to 5pm ET that Jamaican flagged Moementum broke one of their rudders and are currently assessing their options.

In the PHRF fleet, all teams are now racing downwind. The Santa Cruz 52 Sin Duda!, skippered by Lindsey Duda, made a bold decision early this afternoon to stay close to shore of Long Island in the Bahamas where significant gains were made over the fleet. Lee Overlay Partners II, a Swan 60, made the same decision and they now sit second in line honors in the PHRF fleet. Renegade, Dragon, Katara and Senara decided to stay offshore where they haven't progressed as quickly as the other two teams. Winds are expected to lighten in the coming hours for the PHRF fleet