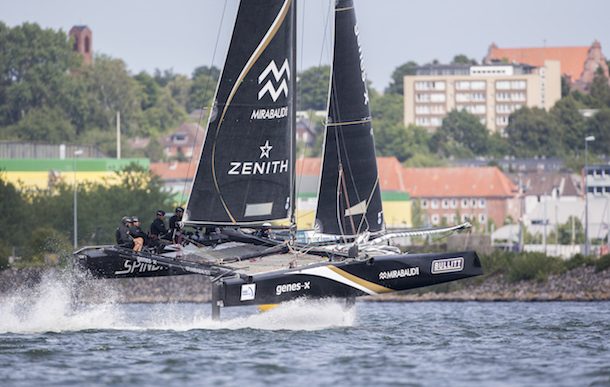 Yann Guichard and Spindrift racing were today’s winners after a solid performance across six races at the Bullitt GC32 Sailing Cup Kiel. Racing on the Kieler Fjord in a moderate northerly breeze under sunny skies, there were multiple place changes in every race, including the final one of the day.

The reaching starts were critical, and a leeward end strategy really started to work for Sultanate of Oman, with Leigh McMillan rounding the first turning mark in both of the day’s final two races. Race 13 proved lucky for Oman who won that one after a fast foiling start. McMillan repeated the strategy for race 14 while arch-rival Alinghi was very slow out of the blocks and started last. This time the British skipper couldn’t make his early advantage stick. “We were clean in front in the last race, but boats came up behind us on their foils and engulfed us.”

Spindrift moved into the lead, but somehow Alinghi found a gust down the second run to move ahead. Guichard found a better line of breeze on the right-hand side of the final beat and regained the lead. Morgan Larson was still nicely ahead and looking good for second, but at the next leeward gate it was his turn to be engulfed, being passed by ARMIN STROM and Oman. “We got parked,” said the American skipper. “We were foiling but heading into a light spot, so we tried to gybe while foiling and didn't have enough power out of it, missed the layline. Then it tightened up with the other boats.”

Closing towards the final turning mark – a starboard rounding before the blast reach to the finish – Oman was approaching on starboard with Alinghi ducking their rival and going for the gap between boat and buoy. Both boats drifted to a near-stop while Team ENGIE went surging past both boats to take 3rd place across the finish. “Leigh was in a tough spot, below starboard layline,” recalled Larson. “We had a good duck, he slam dunked us, we were able to squeeze through, but he slid into us which pushed us on to the mark.”

McMillan was forced to take a penalty and finished 5th, summing up a difficult day for a skipper who this time last week was winning the Extreme Sailing Series event in Hamburg. “I do feel a bit robbed, it didn't really go our way today. We were getting good starts towards the end, but not quite getting the modes right.” It hasn’t helped that his usual wing-man, Pete Greenhalgh, went home early after a night in hospital investigating some painful gastric problems. Paul Campbell-James, who won the America’s Cup World Series event in Portsmouth last weekend with Sir Ben Ainslie, flew in at short notice to take Greenhalgh’s place next to McMillan. Getting the chemistry right is never going to work straight away, however, as the Oman skipper noted. “We’re with a new team, new set-up, the practice isn't quite coming together in terms of nailing all aspects of the racing. You've got to get everything in place to beat the other teams here.”

Guichard is gradually finding the right chemistry with his crew on Spindrift. “We start like a diesel,” he said. “Slow to start, but then slowly we accelerate! The key was the start to the first rounding mark. We changed during the day because we started to leeward at the beginning, but that was not the best option so we started a bit more to windward, and it was a better choice. Today we really sailed better, we pushed hard on the boat and we did a great job. There are so many opportunities to lose a place, but to win a place too. We finished with a win, and it's a good way to set up for tomorrow. We will take it race by race and see how it goes.”

Team ENGIE won a race yesterday, and today Sultanate of Oman and ARMIN STROM posted their first wins of the regatta, meaning that all five teams have won at some point. ARMIN STROM’s skipper Flavio Marazzi was happier after his performance today. “It was quite a surprise after the lunch break that there was so much breeze. It was good to win a race. We had two OCS but we were able to come back and fight from last to 2nd, that was good. It was more the way we wanted to sail, on longer courses, climb up the ladder.”

All the sailors appreciated the crowds who went ‘Wow’ when the boats picked up and started foiling, sometimes within metres of the shore. “It's amazing to see so many people watching the races,” said Marazzi, the GC32 Class President. It's unique in Kiel and tomorrow could be even more spectators, more breeze and more action. We’re all really looking forward to it.”

Sunday's racing for the Bullitt GC32 Sailing Cup Kiel is scheduled for a 11am (local time) start.