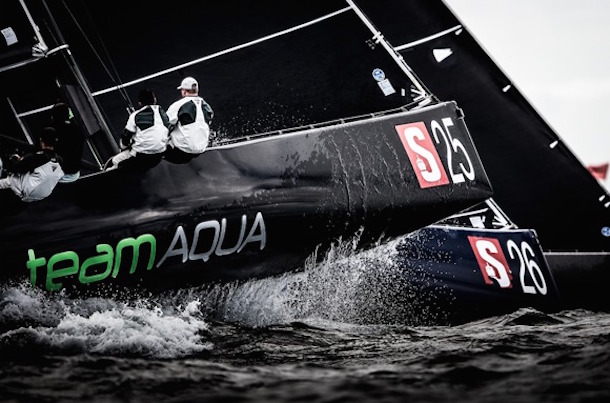 With one day of racing left at the RC44 Marstrand Cup on Sweden's west coast, the two Vladimirs' teams are vying for the lead. This morning Vladimir Liubomirov's Bronenosec Sailing Team was ahead by a mere point, an opening race win for Vladimir Prosikhin caused his Team Nika to regain first place, holding on to it until disaster struck towards the end of the last race, resulting Liubomirov recovering first. Currently Bronenosec leads Team Nika by four points, but with three races scheduled tomorrow, any of the top six boats in theory still can win.

Coming ashore Prosikhin was feeling conflicting emotions. In the first race Team Nika just managed to sneak in on port tack at the weather mark as the competition bore down on her on starboard with rights – a move that had resulted in a penalty when Prosikhin had tried it yesterday. Today he was successful and Team Nika went on to take the win.

After finishing fourth in today's second race, Team Nika was lining up for a podium finish in race three until the last run towards the finish line in Marstrand Fjord, when what Prosikhin described as “a catalogue of disasters” unfolded: A genniker twist developed during a gybe and with a boat immediately to leeward Team Nika was unable to bear away to unwind it. Eventually they sorted it out, but Prosikhin then gybed in front of Peninsula Petroleum and bore away too early resulting in the two boats touching. “So we got an expensive downwind penalty – we had to drop [the spinnaker] and we came into the harbour last,” he recounted. “But we fought and gained two places back, which I am proud of.” However their eighth placed finish was costly.

Nico Poons' Charisma got her second bullet of the series in race two. This largely came about through a good fast start by the committee boat. “Straight away we were a length ahead of the fleet,” said tactician Ray Davies. “From there it is a lot easier – we just tried to keep it really simple and let the boat do its job. We sailed clean all the way around the track, but life's a lot easier when you are in front.”

Like Team Nika, Charisma's final race was disappointing, finishing seventh after a broach on the second to last gybe as the westerly wind built to 20 knots.

“We did a good first beat and overtook Team Nika on the downwind,” recounted Goransson, sailing only his second ever RC44 regatta. “After the rounding, we managed to keep our distance and once we were ahead at the top mark we were pretty much fine, but it got scary at the end because the boats behind were all coming in with a lot of breeze whereas our breeze was dying…”

Up until this race, Goransson admitted he had found steering upwind difficult. “We are learning every day, getting better by increments. Downwind we have been fine mostly, although we had a wipe-out in a gybe in the second race today. It is nice to see finally what it is like to be ahead!”

Tactician Cameron Appleton said staying in front was no mean feat today. “The beats were hugely difficult – the breeze had gone right and on port you were across the waves and on starboard you were straight into them and then they kicked up really steep.”

On Katusha, Russian RC44 newbie Alexander Novoselov pulled off his best result of the regatta finishing third. “It was great fun – very nice weather, difficult conditions, lots of wind. We've been improving every day thanks to a great team and a great effort,” he said.

With Andy Horton off on paternity leave, tactician this week is British America's Cup helmsman Chris Draper, sailing his first ever RC44 regatta.

“Everybody is super smart,” says Draper of the racing. “If you bleed a few lengths, then you're history! As a whole, the standard is insanely high. The guys at the front, drive the boats bloody well – anybody would struggle to beat them.”

Draper admitted that he was struggling on the upwind, but recovering on the downwinds. “Alex [Novoselov] is doing an awesome job downwind, he's a downwind machine! We're getting ourselves back in there. It was good in the last race, to put a start and a first beat together and keep it simple from there.”

Tomorrow, the last day of the RC44 Marstrand Cup, will see racing start at 1130 CET.