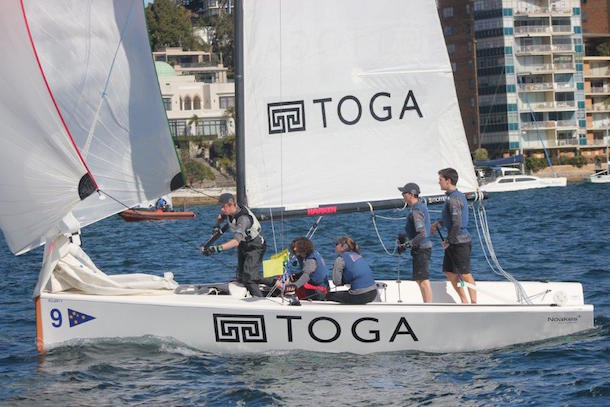 The Race Committee went from abandoning races for lack of wind early in the day to sending the Elliott 7s back to the dock due to excessive breeze just after lunch.

Malcolm Parker and his team of Evelyn Foster, Sam Treharne and Harry Hall (RPAYC) best handled the conditions on the day finishing undefeated after six races.

“I was happy with the boat handling even though we are sailing four up one of the lightest teams,” Parker said. “It was good in the early races but we had to work on our hiking later in the day. We have a new team for this regatta and it was good to see that we improved throughout the day.  Our pre-starts still need some work but we pleased to be in top position at the start of today and if we can keep it together we should have a good result.”

Harry Price (CYCA) and Emma May (CYCA) both only lost one race. Price's loss was to Parker and May to James Hodgson (SCST).  Hodgson is competing in his first match racing regatta at CYCA with his Sunshine Coast Sailing Team.  He has been training CYCA Elliott 6s previously owned by the CYCA that are now all based in Queensland.

“Being new to these boats was a big learning curve for us but we are solving problems along the way,” explained Hodgson. “We were pleased with the day today and hoping for a couple more wins before the semis finals. We have been training on the Elliott 6s and have had to adjust to having a fourth person on the boat for this regatta.  We are enjoying the experience here and looking forward to the youth regattas later in the year to consolidate what we have learned. We appreciate the support of MYC & NYRC who have sent us to the regatta and the CYCA members who have accommodated us on their yachts for the weekend.”

The Race Committee had a difficult day, starting racing at 1030 in a light easterly and getting four races started.  With lines of breeze coming down the Harbour, nothing filled in enough to provide consistent racing.

Towards the end of the first flight the westerly filled in and we saw boats carrying spinnakers in both directions on the course. After moving the course, racing continued and the breeze built to a steady 18 knots with gusts up above 25 knots.  Another fifteen races were completed before it was decided that it was safer to send the Elliott 7s ashore until the breeze abated.

After a short break, a further ten races were completed before the end of the day.

Racing continues today in the vicinity of Rushcutters Bay with the weather looking more favourable than the start of the regatta.