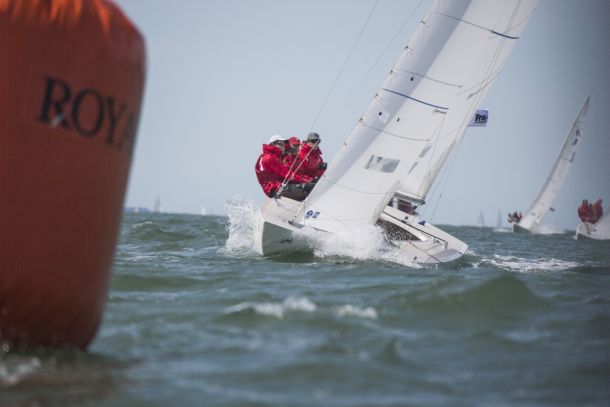 A south-easterly breeze of 12 knots that built to give gusts of 20 proved physically demanding as well as intellectually challenging on the opening day of the Etchells Invitational Regatta for the Gertrude Cup in Cowes. Photo Emma Louise Wyn Jones Photography.

Cowes, UK, August 2, 2015 – The Solent delivered a bright and sunny day of spectacular sailing conditions for the opening day of the 2015 Etchells Invitational regatta for the Gertrude Cup in Cowes, UK.

In a day in which all but a handful of the 16 teams from 10 countries failed to post consistent results, a win in the first race, followed by two second places saw Mark Thornburrow’s Royal Hong Kong Yacht Club take a clear overall lead. Jeanne-Claude Strong, of the Royal Sydney Yacht Squadron lies second overall, seven points adrift of Thornburrow. David Anastasi of the Royal Malta Yacht Club is third, a further four points behind Strong.

With only nine points separating places two to eight, the trio of races scheduled for the second day is sure to see plenty more fierce competition.

Principal Race Officer Phil Lawrence set three windward leeward courses in a south-easterly breeze that built from around 12 knots during the first race to gusts exceeding 20 knots in the final two legs of the last race. For most of the teams that are competing for the 141 year old trophy it was a day of mixed fortunes, with their results swinging wildly between the front and back of the fleet.

This was certainly the case for the defending champion, Jeremy Thorp of Antigua Yacht Club. After a disappointing seventh in the first race he fell to the back of the fleet at one stage in the second. However, in the final race Thorpe, and his crew of Mark Andrews and Olympian Mark Buckley, regained his form from last year, taking a 15-second lead on the first beat. Thorpe held this throughout the race, extending it to 23 seconds at the finish.

Extremely tight racing made for an exciting and incident packed day, especially at the first windward mark, where a number of port tack boats tried to push their luck without success. In subsequent race many fewer competitors chanced a port tack approach. Nevertheless, numerous boats could be seen doing penalty turns for minor rule infringements throughout the day.

A further six teams scored podium results in at least one race, but only four showed genuine consistency. Jan Muysken, from the Emirates Royal Palace Yacht Club in the United Arab Emirates, and crewed by David Bedford and Mark Lees, took third in the opening race, but slipped down to sixth and eighth in the next two, finishing the day on 17 points.

David Anastasi, sailing with Karl Migiani, Tom Bonello Ghio and Zach Zammit of the Royal Malta Yacht Club scored 6, 5, 5 to finish the day on 16 points in third overall, taking a prize for Most Improved Team. Jeanne-Claude Strong, of the Royal Sydney Yacht Club, who recently became the first woman to win the Australasia Etchells Championship, scored 5, 4, 3 to finish the day lying second with 12 points.

Thornburrow’s Royal Hong Kong Yacht Club team of Laurence Mead, Malcolm Page and Charlie White showed impressively consistent form, finishing the day with only five points. “This is a very good fleet with some excellent sailors and it was a great day with a building wind. Malcolm [Page] called some really good laylines for us that definitely helped us out,” Thornburrow said.

Page, a double Olympic gold medallist, added: “Often when you have a good day things appear to be simple – that’s how our day seemed. When we had to we always managed to find a way out of the pack. It also helped that we got a big reminder about the tides and laylines in the practice races yesterday – and Charlie White [a 15 year old Laser 4.7 sailor from the local Royal Victoria Yacht Club] made sure I didn’t underestimate the tide today.”