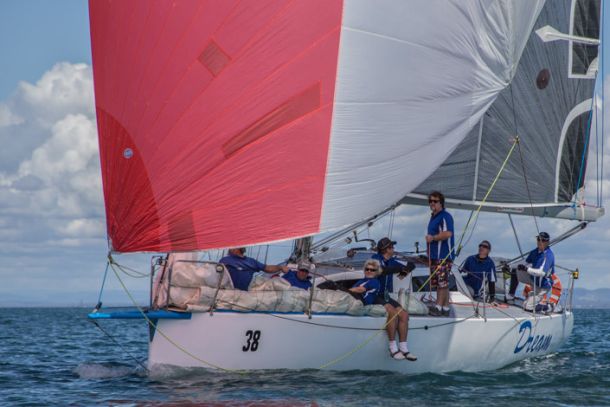 Overnight in the Club Marine Brisbane to Keppel Tropical Yacht Race the fleet fanned out and race leader Alive added more distance to the separation between them and Peter Harburg’s Juan K 70 Black Jack which is in pursuit.

At 1130hrs today, Friday July 31, Alive had bolted to 35 nautical miles clear of the pre-race favourite. As well as being lead boat for the checkered flag, at this early point in the race and based on current speed the Tasmanian team is also in the running to clean-sweep an amazing five handicap trophies.

Halfway between Fraser Island’s Breaksea Spit and Lady Elliott Island with 162 nm to go averaging 11 knots, Phil Turner’s Alive team will be crossing fingers they can carry the southerly all the way to finish, estimated to be around midnight tonight unless conditions change.

“Alive’s smart tactics early in the race plus their waterline length and momentum have kept them in the southerly and carried them away from the rest of the fleet,” said principal race officer Denis Thompson this morning from Keppel Bay Marina. “We are receiving some lovely whale photos from mid-fleet boats and conditions are very relaxed to becalmed in the breeze department.

“The small and midsize boats can’t compete for the line honours trophy, they race for the handicap trophies and the way this event is shaping up the big boats will spend the least time at sea with no change of fortune expected in the forecast to close the gap.”

If the Reichel Pugh 66 Alive, sailing for the Derwent Sailing Squadron in Hobart sets the fastest course time over the 348 nautical miles it will be the third line honours triumph for this boat. The other two were back to back in 2008 and 2009 racing as Harburg’s former Black Jack.

The bulk of the 29 boat fleet that set out from Moreton Bay at 1100hrs yesterday are now off the Fraser Island coast in a northerly breeze which means they are tacking into a headwind, a slower mode than having the wind behind like Alive’s team is enjoying.

At 1130hrs the grand prix 45-50 footers such as Patrice, Celestial, Hartbreaker and The Goat were moving again at 8 knots while Dan Farmer’s B52 was further south creeping along just shy of 3 knots of boat speed. That’s the average human’s walking speed.

The forecast for the Fraser Coast through to Sunday is north to north-easterly around 10 knots and for the Capricorn Coast east to south-east 10-15 knots in the mornings dropping to 10 knots in the afternoon.