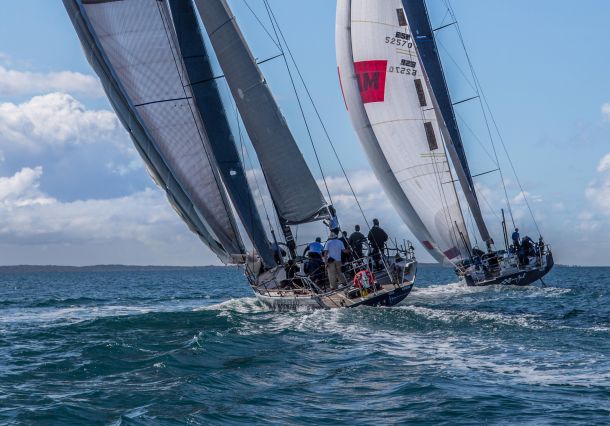 The 9th Club Marine Brisbane to Keppel Tropical Yacht Race is underway and front runners Alive and Black Jack have broken away from the bulk of the fleet in the light easterly breeze and headed close to shore at Bribie Island, between Brisbane and the Sunshine Coast.

As the pair closed in on each other in Moreton Bay in the race’s opening hours, high atop Alive’s mast and sitting relaxed on a spreader for the spinnaker run after the start was Alison Merridew who climbed the 66-footer’s rig to scout the horizon for new breeze.

Third and fourth is Bruce Foye’s Rogers 46 called The Goat and Sam Haynes’ TP52 Celestial, both from the Cruising Yacht Club of Australia in Sydney. Parallel to the contrary situation between Alive and Black Jack, Foye owns Haynes’ former boat and at 1530hrs this afternoon was ahead of Haynes’ latest and bigger Celestial, thanks to a cracking start that put The Goat up near the head of the pack.

The majority of the 29 boat fleet is now sailing alongside Moreton Island towards Spitfire Channel as they settle into the 348 nautical mile race and prepare for their first cold night at sea. There’s no anchoring and cooking dinner then retiring for the night like some believe. It’s hammer down 24/7, wind or no wind, sunshine or rain, usually on a rotating watch system with some on deck and the rest of the crew below resting or sleeping, unless the call is for ‘all hands on deck’.

Michael Job from the boat and business called Southern Cross Yachting delivered the forecast to crews at last night’s official race briefing and suggested they “pack a good book and your thermals”. Soft and variable winds and little swell is the outlook and “If you get seasick in this race I suggest golf might be for you,” he joked with his fellow yachties.

Job believes his BH41 Southern Cross Yachting is the only yacht to have been part of all eight previous races and he names his PHS win in 2012 the highlight.

Prior to docking out this morning for the 1100hrs start off Green Island, there was a surprise chocolate birthday cake decorated in the event colours and singing of ‘happy birthday’ for Zack Austin, the Rockhampton teenager who turned 15 today. He and dad David are on board Peter Kruger’s Archambault 40 Broadsword for Zack’s very first ocean race and it’s believed Zack is the youngest competitor to be part of the annual coastal classic from Moreton Bay to the finish at Keppel Bay.

Alan Breidahl’s Reichel-Pugh 46 called Hartbreaker from Royal Brighton Yacht Club is the only Victorian entry in the otherwise NSW and majority Queensland fleet and is making good time in behind The Goat, Celestial and Tony Kirby’s Ker 46 Patrice from Sydney.