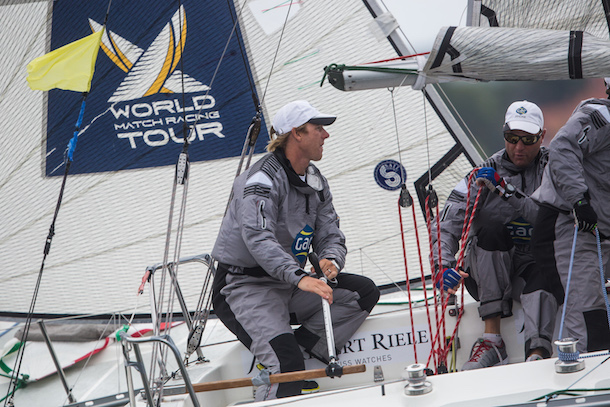 There was plenty of action for spectators to enjoy from the end of the 500m long Molo Pier which stretches out from the seaside resort of Sopot to provide the ideal stadium sailing arena for the 10th stage of the 2015 World Match Racing Tour (WMRT). Today didn’t disappoint as the six Quarter Finalists tussled around the race course in gusty conditions with broaches and flaring spinnakers aplenty.

After Berntsson won the first of three races, Sehested and crew found their stride in the second with a masterful move at the finish as he luffed Berntsson away from the line and tacked back to the finish, offloading a penalty in the process. Sehested went on to win the next two races to secure his Semi Final slot 3-1.

“We had a good day,” said Sehested “It’s my first match racing event in a while but we’ve been getting better in the boats every day so that’s a good thing.”

As Williams finished his last match against Aschenbrenner, it was all action in the third Quarter Final between local sailor and founder of the Sopot Match Race, Przemyslaw Tarnacki (POL) Energa Yacht Racing, and Sweden’s Bjorn Hansen.

After Tarnacki took first blood, Hansen levelled the score before Tarnacki came back to clinch the third race 2-1. Undeterred, but struggling in the difficult wind shifts, Hansen and crew kept their cool to level the score at 2-2 following an overtaking manoeuvre on the final run to the finish. Both teams matched their speeds around the course in the final, deciding, race but Tarnacki was unable to gain enough separation to shake off an earlier penalty, handing the win and Semi Final slot to Hansen 2-3.

It was a disappointing day for Swiss match racer Eric Monnin (SUI) and his Team SailBox. Finishing the last of their Qualifying races earlier in the day, Monnin needed just one win against either of his last two opponents Matt Jerwood from Australia, and Ian Williams to make it to the Quarter Finals ahead of Przemyslaw Tarnacki. Both matches were close, with Monnin crossing the line ahead of Williams but losing the match due to an infringement within metres of the finish. Against Jerwood the battle raged around the track but Monnin just couldn’t make it stick, losing the race and exiting the competition.

The Semi Finals are scheduled for 1000 tomorrow with local and event favourite Karol Jablonski given the choice of Semi Final opponent.

“I’m not sure who I will pick yet,” said Jablonski, “but I’m thinking about one of the Vikings, and maybe I should pick on someone closer to my own age!”